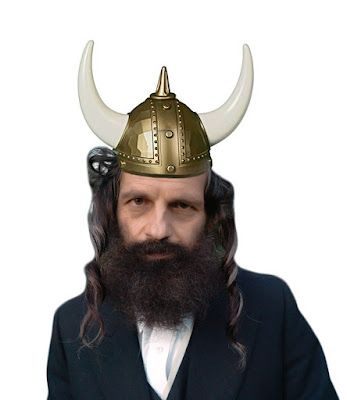 A funny thing happened on the way to the pillage...

As you probably know, I study genetics pretty closely. Was intrigued yesterday when I heard about this new study, Population Genomics of the Viking World.

They sequenced the genomes of 442 unearthed Viking skeletons and guess what? They found what I have heard is a L-791  individual, my people. A genetic Y ancestor of Napoleon. A member of a very small haplogroup, by the way. Branch of E-M34.

Notated as E1b1b1b2a1a4 . L-792 is an endogamous jewish clade, this particular individual purportedly autosomally characteristic of a Pole, the Y-DNA suggests a yid from my genetic line. Boy, did he wander off.

The Viking maritime expansion from Scandinavia (Denmark, Norway, and Sweden) marks one of the swiftest and most far-flung cultural transformations in global history. During this time (c. 750 to 1050 CE), the Vikings reached most of western Eurasia, Greenland, and North America, and left a cultural legacy that persists till today. To understand the genetic structure and influence of the Viking expansion, we sequenced the genomes of 442 ancient humans from across Europe and Greenland ranging from the Bronze Age (c. 2400 BC) to the early Modern period (c. 1600 CE), with particular emphasis on the Viking Age. We find that the period preceding the Viking Age was accompanied by foreign gene flow into Scandinavia from the south and east: spreading from Denmark and eastern Sweden to the rest of Scandinavia. Despite the close linguistic similarities of modern Scandinavian languages, we observe genetic structure within Scandinavia, suggesting that regional population differences were already present 1,000 years ago. We find evidence for a majority of Danish Viking presence in England, Swedish Viking presence in the Baltic, and Norwegian Viking presence in Ireland, Iceland, and Greenland. Additionally, we see substantial foreign European ancestry entering Scandinavia during the Viking Age. We also find that several of the members of the only archaeologically well-attested Viking expedition were close family members. By comparing Viking Scandinavian genomes with present-day Scandinavian genomes, we find that pigmentation-associated loci have undergone strong population differentiation during the last millennia. Finally, we are able to trace the allele frequency dynamics of positively selected loci with unprecedented detail, including the lactase persistence allele and various alleles associated with the immune response. We conclude that the Viking diaspora was characterized by substantial foreign engagement: distinct Viking populations influenced the genomic makeup of different regions of Europe, while Scandinavia also experienced increased contact with the rest of the continent.

Maybe they needed a tailor? Maybe he came for the whitefish? I hear they also called him Eric the Kvetch. Studied talmud between plundering...
Posted by Blue Heron at 12:38 PM

A tailor? The whitefish? Eric the kvetch! You're a kick, Robert! Love this post.

Just for more info: His mother's MtDNA is J1d. This group is known as a "daughter of Jasmine", arrived about 27kya, primarily in the middle east, Mediterranean and Caucasus. I am from the line of Ulrike, K1a1b1a, which is much more recent.