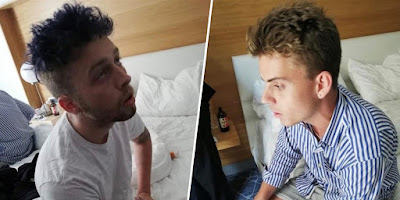 Such a weird story, two teenagers from Marin County travel to Europe, steal an Italian guy's backpack in Rome, demand money and a gram of coke to return it, then stab a plainclothes cop investigating the robbery to death.

Stabbed him eight times, a beloved guy in the community who recently returned from his own honeymoon.

And these idiots didn't seem too poor either, they were staying at the four star Le Meridian Hotel. Somebody wealthy put up the money for that for sure, the place ain't cheap. "We're sending you to Italy, kids. Don't kill anybody."

Bet these guys never had a struggle in their entire short privileged lives? I guess they were trying to buy drugs. Recent graduates of Tamalpais High School. Now busy pointing their fingers at each other.

Who goes to Europe and engages in this sort of horrible behavior? Once again Americans look like horrible beasts to the rest of the world. Over entitled Mill Valley brats destroy their lives and extinguish the life of another in one fell swoop. I'm sure they will have the best legal defense team money can buy.
Posted by Blue Heron at 9:45 AM