Truths and half truths 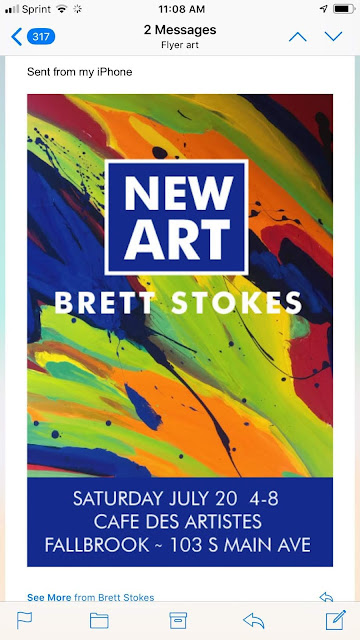 My buddy Brett Stokes is having a show at Cafe des Artistes on Saturday. Bunch of new paintings. Mostly abstraction I think. Wish him well. Sell lots.

I asked him to send me a picture for the blog and he did. I am not sure if the iphone frame is part of the act or not.

Michael does an incredible job there with such a little kitchen. Some of the tastiest soups in town, always fabulous.

Cafe Primo / Espresso Lounge / Geds/ Brooktown, you know the place. It sold again. Going to get a new name, which is good, Brooktown seemed a little too hip hop to me.

I met the new owner and told her how bad the coffee was and she has quickly changed it for the better. Hope she can do something about the food, the morning stuff in the case is pretty inedible.

I thought Cuban would be tough in Fallbrook and frankly the entrees were skimpy. God, I miss Jim Tudor. Dude came in and made us s.o.s. (shit on a shingle) on New Year's Day...

Scampi / Servianos / Village Inn is also rising from the ashes as La Cucina. Just what we need, another Mexican restaurant.  I miss Charlie and Brigitta's German apple pancakes. Maybe they need to paint it pink again?

I talked to Robert from Le Bistro about eight months ago. Still alive, or was then. Another place I miss. Pork Normandy. Beef Wellington. And what a guy.

Can't even go into the old La Caseta any more, really bad last time I tried it.

Winchells is moving into the old Radio Shack. We have a great donut shop in Fallbrook, Donut Pantry near Major Market. Killer apple fritters and raisin rings. Winchells has to be nuts to want to compete with them. There is another donut shop too, near Don Vincents, used to have great macaroons. Haven't stopped there in years. Think we'd be better off with a Radio Shack.

I miss Aydees, the Guatemalan joint across from El Toro that moved to Vista. The replacement can't hold a tortilla to Robertitos. Which by the way, has the best fish taco deal in town. Better than Pedros and it's open all night.

Bruce Taylor told me that he had tortilla soup at El Jardin the other day that was incredible. I have to try it.

Delos has really invigorated the menu at Firehouse Que and Brew.

Leslie and I hardly ever go to 127 but we had an excellent fennel sausage pizza made by Faro the other night.

Still haven't made it back to Smalltown. Need to, want to support them.

New Yumi Sushi near Major is really good. I think the fish quality is superior to the other place in town. Now if they only sold Bimbimbap... So many Koreans around who have no problem pretending they are Japanese but won't serve Korean food, which I love...

Rosas is still my favorite Mexican food in town but they have really raised their prices significantly.

Dominicks is still purring like a top. His spaghetti and large meatball is not a bad way to go for lunch. Good deal. Some of the prettiest counter girls in town too.

Haven't hit Oink and Moo for a while. Jonesing for their gorgonzola stuffed pork chop.

Thai Thai is still great but Jennie is so busy opening new restaurants that we never see her anymore. Try the mango and sticky rice dessert sometime.

I hear that the purple building that housed El Meson may be reborn as a steak house. Cool, we could use one.

My current favorite sandwich in Fallbrook is Harry's grilled cheese with bacon and a fried egg on top.

I am addicted to the fresa paletas at El Toro. But what happened to the fried chicken drumettes?

Chris at Main St. Cafe had a birthday yesterday. Wish him well. I love that guy. 💕Try his gyros or beefeater sandwich. Exceptional. A place to see real Fallbrookians. Like Big Dave and Larry Sinclair. And Sue Price. Great breakfasts too.

Brunch wasn't as good as dinner at Finch in Wildomar.

Alex says that there is an amazing Banh Minh sandwich takeout on Oceanside and College with a bakery next door that makes the bread perfect.

Had a terrible tri tip sandwich at Phils in San Marcos. Don't waste your time.

Leslie and I both got sick at the same time on Northgate carnitas. Cuidado.

You newcomers probably don't know this but Fallbrook's nickname for many of us used to be Frogbutt. Would be a great name for a restaurant. This is my fortieth year here, but who's counting? 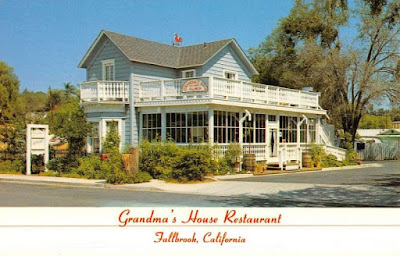 If you could have any new restaurant open in this town, what cuisine would you pick? I think a nice continental establishment like the Packing House or Grandmas would be a good addition. Not too trendy or progressive. Comfortable for all demographics. And if you say what or where it means you really haven't been here that long.

You think we have a homeless, indigent problem in Fallbrook? Try Temecula. I went to Valero to gas up the other night on the 79. Young people with tombstones in their eyes, as Steppenwolf once sang. ☠ Feral.  Souls extinguished. They are living right there in the creek. Scary. Make our street people here look like Salvation Army carolers.
Posted by Blue Heron at 3:32 PM

I love Harry's. Especially the sliders and the tacos and the macaroni and cheese,etc.
I wish it still looked like it did when it was The Packing House.
Barbara

i cook, so i eat pretty well. i’ve lived in many places that had a much better selection of restaurants because there was better access to ingredients and kitchen talent. i’m old enough to remember when grandma’s was grandma’s and fondly remember drinking mason jars of granpa’s summer punch (which was vodka spiked lemonade) in the bar there which was called grandpa’s. of course i also remember that before it was grandma’s restaurant, it was johny and hisako konces’ house. and i’m old enough to remember that before the packing house was there that space was a short-lived prime rib/seafood joint called the dolphin (where i got my first job cooking). i could go on about what a great itallian deli we had in geovanni’s, and all the wonderful old school vegetarian eateries we once had in abundance in town. alas, waxing nostalgic feeds the mind but not the belly. what would i like to see here now? a good vietnamese joint would be nice, or a top notch asian noodle-house, or a better offering than the current gringo-chinese. good indian, especially northern indian, would add to the community. that said there is a lot of room for improvement, but as always, frogbut’s problem is a lack of patrons to support new businesses. anyone remember a pre-temecula place called depalma’s italian village up on old 395? man, that was eatin’...

Thank you. I am with you on the Vietnamese. I remember Depalmas. You ate what they cooked that night, limited menu. In the trees. We used to go to a Romanian joint in Temecula that served french food and had a wandering violin player. That was cool too.

been thinking on your reference to fallbrook’s nickname for many being frogbutt. as i recall, that was a diann term and was limited to a small subset of the locals. the more common hipster moniker was funkbrook.

the source being: in those days, where the los jilgueros preserve is now, there were a series of marshy ponds that were referred to as “anthony’s ponds” (being they were on land owned by donald anthony). in the late 60s, someone had an accident and had rolled a vw van off the berm on the east side of mission road south of town and it had come to rest on it’s side next to one of the ponds with it’s roof facing mission rd like a billboard. in the early 70s some hippies painted the roof of the van to look like an abstracted american flag with a peace sign and lettering between the red stripes reading (as memory recalls):


the birchy bummers, was a reference to the john birch society. the one rusty was local vigilantly leader, and owner of the “ammo room” pizza joint, oreste “rusty” fossati. as for the 2 virgins, your guess is as god as mine…

for most of the 70s that painted hippy billboard served as the welcome sign as you approached fallbrook from south mission. i’ve been looking for a picture of it for years. i know someone out there has one. if we still had the archives from the old fallbrook enterprise newspaper, i know they ran photos of it. so much lost with those archives, (like documentation of the downtown fallbrook halloween riots of ’72 and ’73. who remembers those?).

It was a diannism. Who the heck is this? tap me on the shoulder and tell me if you see me in town.