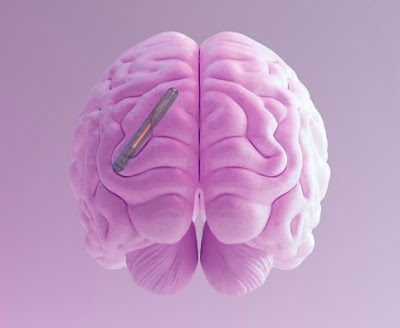 I would be remiss for failing to mention that Elon Musk is ready to put a chip in your brain. Now how long ago did I call that?


Speaking on Tuesday, the CEO of Tesla (TSLA) and SpaceX said his Neuralink devices will consist of a tiny chip connected to 1,000 wires measuring one-tenth the width of a human hair.The chip features a USB-C port, the same adapter used by Apple's (AAPL) Macbooks, and connects via Bluebooth to a small computer worn over the ear and to a smartphone, Musk said."If you're going to stick something in a brain, you want it not to be large," Musk said, playing up the device's diminutive size. Neuralink, a startup founded by Musk, says the devices can be used by those seeking a memory boost or by stroke victims, cancer patients, quadriplegics or others with congenital defects.The company says up to 10 units can be placed in a patient's brain. The chips will connect to an iPhone app that the user can control.The devices will be installed by a robot built by the startup. Musk said the robot, when operated by a surgeon, will drill 2 millimeter holes in a person's skull. The chip part of the device will plug the hole in the patient's skull."The interface to the chip is wireless, so you have no wires poking out of your head. That's very important," Musk added.

This is how it starts and then it slowly morphs. It will program the ambient temperature in your room and suggest songs to hum. I know your radio reception will be incredible and you will be able to process much more information than the average human. Google will now be able to run ads directly inside your head. You can probably now change the channel on your television with a mere blink.

But as the article points out, who will own the brain data harvested from your skull? It says it can be controlled by an iphone but tell me, who has control of the iphone? Fears of outside forces commandeering your nervous system are surely extremely overblown, aren't they? But did you know Medtronic recently found out that their cardiac pacemakers could be hacked. And of course be prepared for twenty four hour surveillance and tracking. Kill switch? 🕱

I am sure that these chips will soon be all the rage but I am pretty sure I pass... How long before Elon sticks you in Ludicrous™ mode?

Once a chip in the brain can truly make you smarter, more efficient, and/or a better worker, how long will it be before unchipped humans are no longer employable? How long before they can no longer obtain a college education? I believe that once such technology exists, its use will become inescapable. Don't believe me? How employable are people without computer skills? Can you actually still graduate from college without such skills?

Great comment, I am afraid that you are right.