Trump went after his old pal Al Sharpton today, called him a racist. Once upon a time they were actually bros. Let's see, who is left? He has pilloried Maxine Waters, Elijah Cummings, Ayanna Pressley, Don Lemon, Lebron James, Michael Jordan, John Lewis, my god, anybody else left? Trump thinks that blacks are stupid, they originally came from shithole countries and they live in disgusting, rat infested messes. He finds a new black target to pick on every day. His base loves it, his numbers rise every time he launches a racist attack. 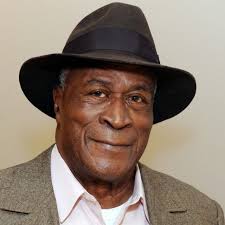 John Amos, he hasn't attacked John Amos yet.
(keep your head down, John,)
Posted by Blue Heron at 5:14 PM

Trump is equal opportunity in calling people out and you could've easily ratcheted off the names of many more whites that he's 'pilloried' than your attempt at the all time complete list of African Americans here, but that would involve intellectual honesty and how would that square with your very own bigotry and race baiting?

I stand behind what I wrote. Have the balls to sign your name when you call me a racist. Trump singled out eight minorities for abuse in two weeks. That is not coincidence, that is calculus.

Both can be true, right? Trump can both be a racist (as exemplified by comments and policies) and an equal opportunity insulter of people like all republicans that ran against him (men, women, white, and hispanic), about half of the republicans in the senate and the house, the supreme court, the chairman of the federal reserve... For a complete list you may want to consult https://www.nytimes.com/interactive/2016/01/28/upshot/donald-trump-twitter-insults.html

I totally love Anonymous' claim that you (BH) are involved in bigotry and race baiting. There isn't much rational defense against claims like hers or his since Anonymous does not acknowledge the difference between Trump the tasteless pig oinking at half the world versus Trump the racist pig attacking minorities with well worn racist tropes (Pro hint--The racist tropes have a horrific history of motivating serious violence) the rest of the pigs oinking is merely moronic and disgusting. This process: A) racist proclamation, B) angry response from the target, C) claim by the aggressor that any defense or hostility by the target is proof of the targets racism; is so full of illogic that all there is in the process is an exchange of emotional brickbats. Since there is no possibility of anyone convincing anybody of anything the only possible end result is a power struggle. The denoumet of this power struggle is scheduled for November 2020.

Evil like this is banal because its perpetrators are intellectually incapable of taking it any higher. I say fuck them and the horse they rode in on.

So...let me get this straight. That Trump responds with some inconvenient truths and rude names to those who attack him is considered racist only when you New Segregationists have delineated the list between 'persons of color' and 'all the others, such as other Republicans, etc..'.

Inconvenient truths? Next you will try to tell me about all the good people marching with the nazis at Charlottesville.

Well shucks, once a discussion is opened with circular reasoning there really isn't a discussion. So I think we can all save some time. Our various opinions will count on November 2, 2020, see you there at the polling place.