Les and I went out with friends last night to see the Claypool Lennon Delirium in San Diego. We had bought the tickets to the Music Box before she had won the free tickets in Anaheim. Stopped off at Spicy City first for great Chinese food. 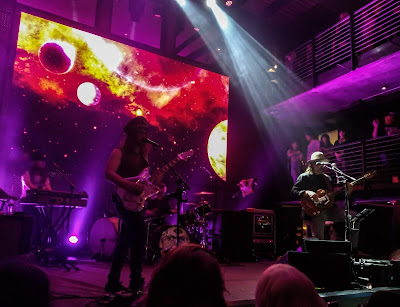 I dogged them a little bit last time I wrote about them, they were much better last night, in fact really great. All four members of the band are pretty amazing musicians.

They are not a jam or improvisational band but what they do play takes consummate musicianship. Heavy emphasis on British psych.

Extra long set last night, pretty intense music at times, we were treated to a nice Boris the Spider cover. Even though I was not personally "kissing the skies" I felt it pretty strongly.

Didn't get back home until two o'clock.

The venue was pretty cool, neat light show, we had side seats way up front. But the place was so oversold it was terrible, couldn't even stand without beefing with someone, it was so compressed. We met some very devoted followers of the band, nice couple from San Bernardino drove down, this was their tenth time seeing the band.

Our friends asked me why they sang so nasally when they spoke so normally and I had to explain that they were merely affecting an early British psychedelic patois. Not going to go off on that again. That Les Claypool can play the freaking bass!
Posted by Blue Heron at 12:43 PM