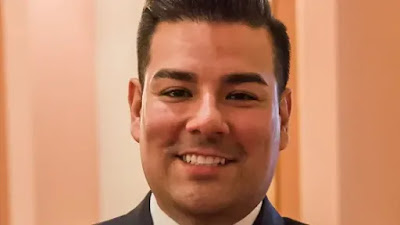 It is an old adage that money is the mother's milk of politics. Governor Gray Davis was beholden to the prison guards union, Jerry Brown played footsie with the utility companies, there is nothing new or novel here.

Of course this happens on the left and right. Remember Chuck Quackenbush?

But the good ones at least learn how to hide their larceny.

Insurance Commissioner Ricardo Lara is apparently remarkably clumsy at the game. Strange because he was a darling of Brown, Harris and Newsom. The first openly gay person to hold statewide office, Lara is also responsible for bills allowing illegal immigrants to be eligible for Medi Cal benefits.

It is the old play, intervening for clients who put money in your pocket, something Lara promised not to do.


California Insurance Commissioner Ricardo Lara’s office intervened in at least four proceedings involving a company with ties to insurance executives and their spouses who donated tens of thousands of dollars to his re-election campaign, records Lara, who was elected in November after promising not to accept campaign contributions from people he regulates, last month overruled two decisions by Department of Insurance judges and ordered the reopening of cases which involved Applied Underwriters.

It appears that it gets worse.


For the second time in two weeks, a senior California Department of Insurance official has overruled an administrative law judge and reversed a decision that could have cost an insurance company hundreds of thousands of dollarsRecords show Special Counsel Bryant Henley intervened Monday in a case against Applied Underwriters, a workers’ compensation insurer whose executive and spouse donated tens of thousands of dollars to Insurance Commissioner Ricardo Lara’s reelection campaign. Henley signed a 47-page amended order just below Lara’s name in the case filed by RDR Builders of Lodi. The action came days after Lara, elected in November, pledged to no longer participate in proceedings involving Applied Underwriters due the campaign donations.


Attorney Larry Lichtenegger, the lawyer representing RDR Builders and Oceanside Laundry, said he was “extremely concerned” about both amended orders. He said Lara was acting outside the scope of his elected powers.“In return for their campaign contributions, he exceeded his authority under Reg. 2509.69(c) by changing the recommendations of the (administrative law judge) in order to give Applied Underwriters a bonus for their illegal conduct,” Lichtenegger said.That specific California Code of Regulations section says the insurance commissioner “may make technical or other minor changes” to an administrative law judge’s decision “or a change of a similar nature that does not affect the factual or legal basis of the proposed decision.”Lichtenegger said Lara’s rulings would cost his clients $500,000 or more.“What the commissioner did was change the result,” he said. “That is not a minor change.”Lara told KQED that he met with Applied Underwriters president and CEO Steven Menzies, a conversation that some say could violate state rules against ex parte, or private, meetings between regulators and people with business pending before the agency.“It was a very casual meeting,” the commissioner said. “He wanted us to see if we could, and staff could, meet with him to review the cases before him and I said ‘Absolutely.’ Anyone can meet with our department staff.”

Casual meeting? Of course it was. This guy sounds like very bad news. Kudos to McDonald for his reporting. I hope Lara has a very short tenure in the job.
Posted by Blue Heron at 9:26 PM

They look legit to me.