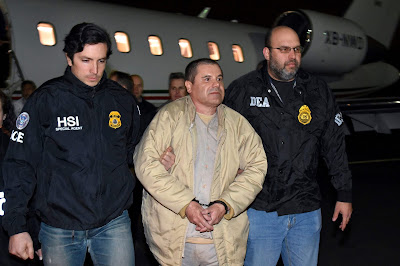 Joaquín Archivaldo Guzmán Loera, better known as El Chapo, is complaining that his accommodations in prison are inhumane. The President of Mexico agrees.

The powerful drug lord said incarceration was "physical, emotional and mental torture" and "the most inhumane situation I have lived in my entire life."

Guzman's legal team has filed requests for better prison conditions at the MCC, where he is kept in solitary confinement 23 hours a day in his 10 x 8 cell. His attorneys say that since he was brought to the US he has spent more than two years without any access to fresh air or natural light, adding that he must sleep with the light on in his cell, conditions that attorneys say are "psychologically scarring." He also asked for two hours of outdoor exercise a week. The judge denied Guzman's requests for improved prison conditions.

Now this is coming from a guy who used to personally shoot his drug couriers in the head if they were late.

He once offed a Roman Catholic Cardinal, Juan Jesús Posadas Ocampo. In 2014 he claimed to have killed between two and three thousand people. During his trial witnesses said that he liked to murder people in creative ways — such as blowing them up with grenades or burying them alive.

According to his secretary, Guzman used a woman known only as “Comadre Maria” who sent Mr. Guzmán photographs of girls as young as 13 for him to choose from. For a $5,000 fee, Mr. Cifuentes said, the kingpin and members of his entourage had the girls brought into the mountains to rape them.

Mr. Guzmán considered the youngest of the girls to be “his vitamins” because raping them gave him “life,” according to court documents.

And he is complaining that the windows in his cell are too small and that he is psychologically scarred? Wow.
Posted by Blue Heron at 10:42 AM