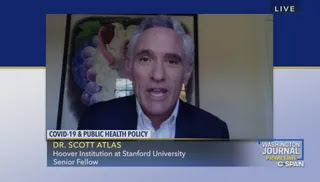 An eight month old catches Covid 19 at a child care facility and brings it home to her parents.

When I saw this article yesterday I thought, this can't be right? Kids catching the virus at child care centers and then infecting their parents?

How can that be? Didn't Fox talking head and new Trump bff Dr. Scott Atlas say that kids never get covid and that asymptomatic kids couldn't spread the disease?

The guy who said it is a "good thing" for younger, healthy Americans to be exposed to the coronavirus as children are at essentially "zero risk?"

I'm shocked, if you can't trust a retired radiologist to opine and set national health care policy on epidemiology and infectious diseases, just who the hell can you trust?

The Stanford medical community has written a rather harsh letter recently attacking and debunking Atlas, who must feel like he is carrying the whole world on his shoulders right now.

“Many of his opinions and statements run counter to establish science, and, by doing so, undermine public-health authorities and the credible science that guides effective public health policy,” reads the letter addressed to colleagues on Wednesday. It lists a series of bullet-points, highlighting the importance of public health interventions like wearing masks and social distancing. The authors also point out that testing asymptomatic people is important, and children of all ages can be infected with the virus.

The letter also casts doubt on so-called herd immunity, noting that the safest path to controlling the pandemic is by deploying “rigorously evaluated, effective vaccines that have been approved by regulatory agencies.”

“Encouraging herd immunity through unchecked community transmission is not a safe public health strategy,” it says.

The great thing about writing this blog is that I can be held accountable for what I write, right or wrong. It is all there in the archives. I don't go back and change things so that I look good. And you know, as soon as Supervisor Jim Desmond trotted out this modern day Rasputin I said that something didn't smell right and that he was clearly full of shit. Soon Trump had a new best friend prattling on, making absurd suggestions about herd immunity.

If this was feudal Japan we could demand that he publicly disembowel himself and commit seppaku for peddling such destructive tripe and harming the health and children of our nation. Watch him slink off into the shadows instead, after Trump is done using him.

I wonder if Dr. Atlas should be reported to his state's medical licensing board for malpractice, gross negligence and incompetence!?