I was on a friend's blog yesterday and had to disagree with him about something. He said that "to disparage, insult, or threaten anyone because their values and opinions are contrary to your own, is to contribute to the divisiveness and polarization that nearly everyone is complaining about today."

He then backed it up with a bunch of books from experts that reinforced his position. I should point out that this person censored a comment I made recently because I assume I couldn't make nice and agree with his normally agreeable cast of commenters. Kind of irked me because I let most things go here except vile stuff and anonymous nasty comments. But hey, his sandbox, his rules...

Anyway here are the books:

How To Have Impossible Conversations (2019) Boghossian & Lindsay

The Ape Who Understood The Universe (2019) Steve Stewart-Williams

I haven't read them, I am sure that they are all insightful and great.

I respect what my friend is saying and his opinion but I don't necessarily agree, in fact I disagree. Because there are an extraordinary number of people out there today that believe absolutely crazy shit. Why should I give them any credence at all by suffering their opinions and pretending that they are valid or co equal to those views I consider at least rooted in sanity? Does it really do us any good to adopt this "let's just all get along attitude" at this point in time?

For instance, the Q business. There is supposedly a ring of Democrat satanist pedophiles who work out of pizza parlors enslaving young children in child sex rings. Remember the guy who shot up the pizza parlor looking for Hillary Clinton a few years ago who had been weaned on this shit?

I'm supposed to not challenge a worldview like this? Guess what, according to a new study 56% of the GOP thinks that this is at least partially true. 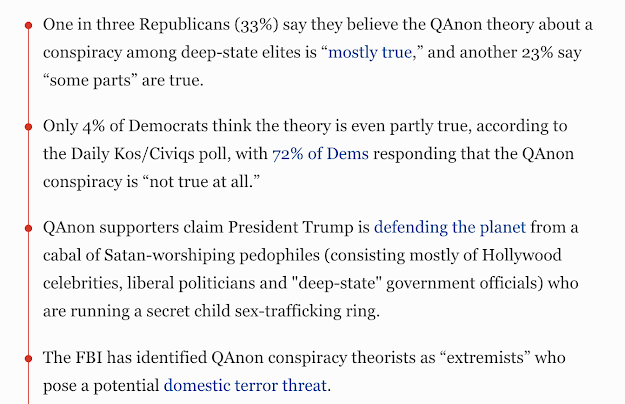 Batshit crazy and I have no problem saying so. 56%? That is insane.
40% of Americans believe that evolution is a fallacy and that the earth is less than 10 thousand years old. The number rises to 55% among Republicans. This usually entails a paranoid co theory that the earth's rich fossil record has been artificially placed by co conspirators trying to thwart god's will.
Bullshit.
Democrats are more than three times as likely as Republicans to say dealing with climate change should be a top priority (78% vs. 21%). A huge partisan gap of a similar nature hangs over our contrasting opinions on environmental issues.
In June 68% of Republicans said that the worst of the coronavirus was behind us, as opposed to 28% of Dems. If you look at the mortality numbers since then, it is obvious who was wrong. In fact some experts are calling for about 400k deaths by next January, a truly chilling number that I hope is inaccurate.

Rather than bury our differences over these matters, I think we should bring them out in the open. I will call you an idiot and you can call me one too. But please do me a favor and let me know if you are down with the satanic pizza stuff or think the earth is really flat and the moon landing was faked. Because I frankly don't want to waste my time talking to you or trying to get you to change your mind.

Because you are an imbecile and a lost cause. Oh shoot, did I say that? I think that it is time to forget about contributing to the divisiveness and polarization and start thinking about calling things for what they are and stop bullshitting around and pretending that anything you made up in your head or read about on InfoWars is somehow as valid as something rooted in science and actual reality. This idea that we have to be neutral at all costs, no matter how outlandish the underlying belief. I know, I know, I am a part of the problem and not the solution. Let me just shut up and pretend.

I DO NOT understand the Q business... Pizza loving pedophiles led by Hillary Clinton??? Please explain!

You're right of course.

I'm right there with you - part of the problem, that is. I have neighbors I can't/won't even talk to except to say 'hi', 'cause I know we'd get into it if we tried to have a conversation about anything real. The other day the (safer to talk to) wife half of one set actually said she thought djt was doing a 'great job' on the plague. My response was, "?...really...!"

I wonder if Martin means something real like "djt colluded with Russia". I'll bet he'd be all chatty then. You stupid fucking idiots.

Read the Mueller report. He pretty much did. "Russia, if you have Hillary's emails, I want them."

I want to make clear that I very hate people, I hate ideas, and I hate values That I find it dangerous to the betterment of society as a whole,

The only thing I was trying to express in my essay is that calling people disparaging names and insulting them is counterproductive to elevating one’s cause.

Directly insulting somebody, immediately takes away from one’s argument and position.

Lastly, I’m sorry I’m only now getting to this. It’s been a very rough week with mom and only getting worse.

I love you like a junkie loves hot spoon, dude…

I don’t waste my Time talking to stupid people. Anyone who believes in the utterly idiotic and preposterous Q theory is beyond discussions.