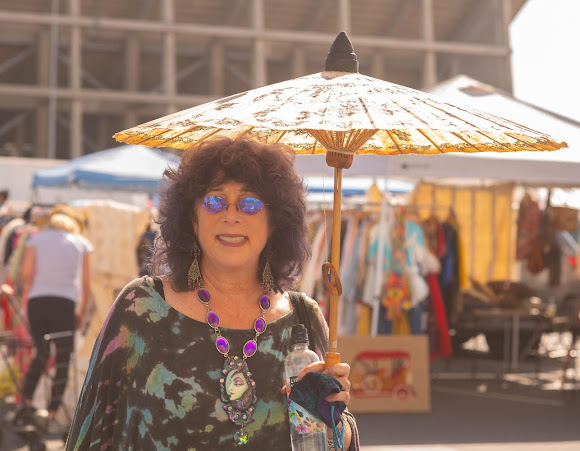 Leslie and I went to the swap meet in Long Beach early Sunday morning.

There was a drunk guy driving erratically, speeding up and changing lanes.

I called 911. A few seconds later we watched him get off the freeway, spin around and hit somebody.

Hope he meets his just desserts. Never did see a cop.

We picked up some great material there and I passed out fliers for the new show I am proposing and talked to dealers I like and trust. Everybody was very positive.

But even cooler was the fact that I met some special members of my family there for the first time yesterday and that will require a little story.

Recent reports show that a huge percentage of the younger generation know nothing about the holocaust, well, except that they think it was something the jews maybe started. I have to tell you that it did happen, because it decimated my family and many others alike.

As I have recounted before, my grandmother Pesia Rivka Szkarlat lived in the "shtetl" or small town of Wyszkow in Poland, near the Vistula forest and river. Her father owned a sawmill, the family was relatively well to do.

She had nine brothers and sisters. My grandmother sensed the coming Nazi tide and escaped to Palestine. One other sister, Malka, also fortunately escaped. All the rest of the family perished, as did the great bulk of the remaining population of six thousand jews, who were sent to Auschwitz.

Except one other sister it turns out, Rachel or Ruchel, who was bombed by the Germans and sustained a massive head injury in the forest. I am not sure of the timing, I know she eventually succumbed but she had a male child, a young boy, who survived somehow, I am not sure where.

Many of you know how involved I am in genetics research and exploring my family roots. About a year ago I was contacted by the young surviving boy's granddaughter. She traced me through dna. She is an Israeli, now living in Los Angeles. We have talked about getting together and meeting but it has not happened. Her uncle is my closest tested genetic relative, with 287 cm of shared dna. Her mother is also one of my closest genetic matches. Her mother contacted me the day before yesterday.

I suggested that she, Miriam and her husband Joe meet us at the swap meet yesterday. They assented. Now I have never met them and only briefly saw a picture of her but among a thousand or more people I recognized her walking down a row in a mask and introduced myself.

They are both very delightful. She is a very young 72 years old. We stood and sat in the rather blazing heat and talked about the family. She had met my grandparents and father in Israel as a young girl.

We plan on getting together and meeting more of the family at their home one day soon in Los Angeles. But you want to know something extraordinary? What do she and her husband love to do more than anything, what is their hobby and principal avocation?

They are serious birders, they like to shoot great photographs of birds and wildlife with nice cameras and explore nature.

They do this every chance they get on the weekends, soon going to Yellowstone, have visited and crossed paths on many of the very same roads I travel. We are going to share some of the places that the other is not familiar with. Get out and shoot together.

How interesting is that ? Does it sound familiar? What are the chances? A genetic family pre-disposition perhaps, or kismet? In any case, I have very little family left and I am glad that these two found me and are definitely kindred spirits with a very similar if not identical political inclination.

Life for all its troubles is a wonderful thing and the infinite universe is always capable of doling out rich blessings.

Best bog yet. So cool the similarities. Beth C


That is wonderful, Robert! I'm so happy for you. I look forward to hearing more stories about your family and seeing the bird pictures from your future family excursions.

What an incredible gift...🎁

Such a nice story on this important holy day.

And, such a gift. When there is not much family left, it counts as something very special.

I don't comment often, but that is a touching story.
All the Best
JS

Just goes to show, there's more to this world than we understand. That connection is spooky cool. Congrats on finding your kin.

What a delightful story.

Great photo of the one and only Leslie!

Thanks for sending this, Robert, and for thinking of me for the prints.