My father was an iberophile, a lover of all things Spanish and tauric, from Carlos Montoya to Carlos Arruza. He enjoyed bullfighting. When I was young he would take me to Tijuana to see the corrida on occasion, usually at the newer Bullring by the Sea. Best carne asada street tacos I have ever tasted across the street but that is a story for another day.

The main matadors of the day back then in TJ were Eloy Cavazos, Antonio Lomelin and Curro Rivera. I am not going to mince words, I enjoyed it. Not the killing or the gorings, of which I saw several, but the medieval nature of the pageantry, the feeling that the rituals I was watching extended back a thousand years or more.

And I was always glad to know that the meat of the bulls fed the neighboring poor after the corrida. Better than an ignoble death of a cow in a hidden stockyard. And in this battle, the bull stood at least a chance.

My dad taught me a few things, always sit on the shady side as the borrachos on the sunny half were prone to mean knife work when they had absorbed some vague sleight from a neighbor or maybe too much mescal. I will never forget being a ten or eleven year old and hearing the derisive chants towards a matador who failed to challenge and dispatch his bull with courage, el matador no tiene cajones. The Mexicans are masterful hecklers.

Somewhere in my late father's possessions I pray still exist the old movies he personally took in Spain of Manolete, of Arruza himself on horseback.

I don't know why but I really like this painting I bought this weekend. It was quite inexpensive, by the way. Has nothing to do with the subject, I like the way the paint is laid down and the chroma which reminds me of the baked plains of La Mancha. Sort of reminds me of the work of A.G. Ryder, a man who studied with Sorolla.

To those of you that hate bullfighting, you will notice that in this one, the bull clearly wins. I am not sure if he vanquished a matador or bandillera but I see no weapons. Even if you abhor bullfighting and many do, I hope that you will take a moment to appreciate the deft artistry in this painting. All comes down to light falling on form.

Which was painted by a minor Spanish artist, one José Fuentes de Salamanca, born in 1934.

If you look at the figure on the extreme left and the two beautifully rendered figures middle left, you will see the broad muscular brushwork and the nuance and attention to gestural human form that I particularly favor. Obviously his draftsmanship is first rate, it is very difficult to paint if one can not draw and he obviously could. And yet he is consistent across the canvas, no one area on this impressionist canvas is belabored or overly detailed. 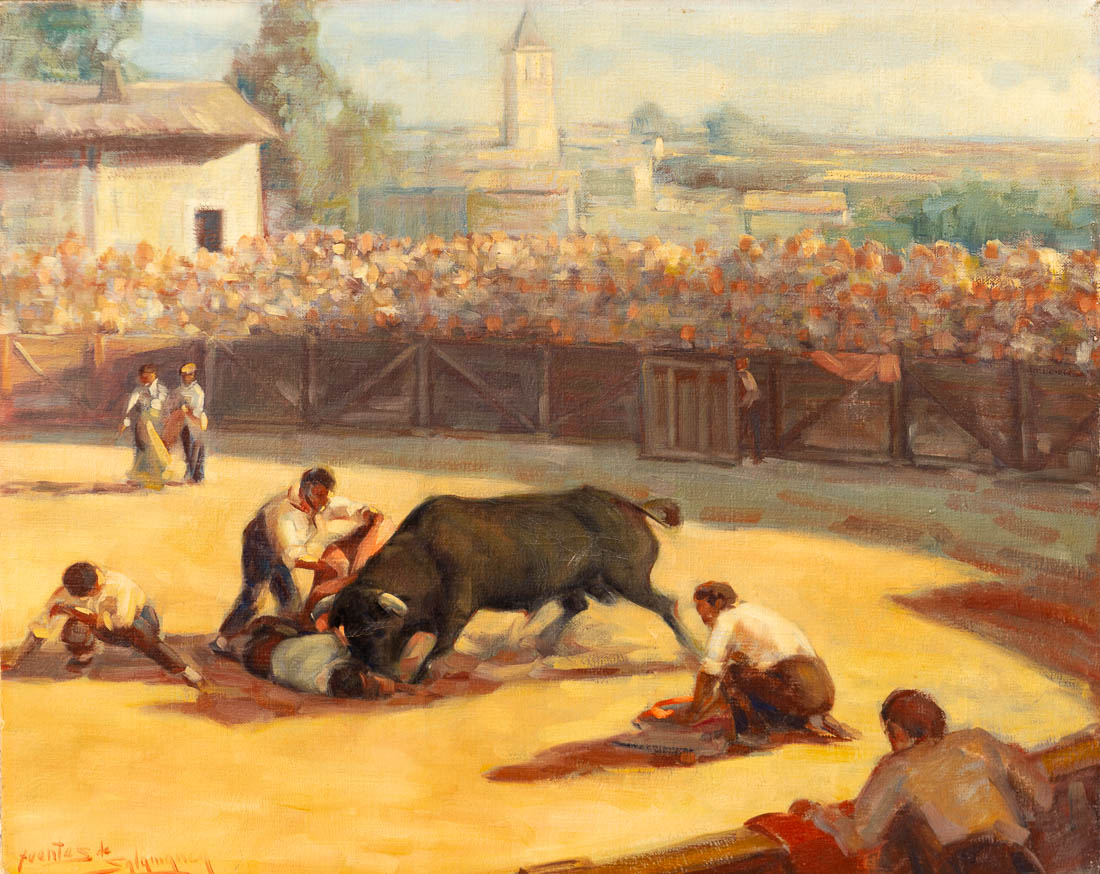 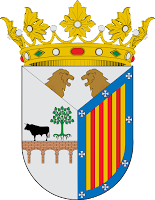 At some point Salamanca took the name of his town, he later became famous for his religious paintings and bad renditions of the American west. The city is in western Spain, the capital of the Province of Salamanca in the autonomous community of Castile and León. Its university goes back to 1218, the third oldest in the Western world. In its heyday in the 16th century it had 8000 students, now there are less than 400.
Two towers rise prominently above the city. I would not be surprised if one is depicted in the painting. 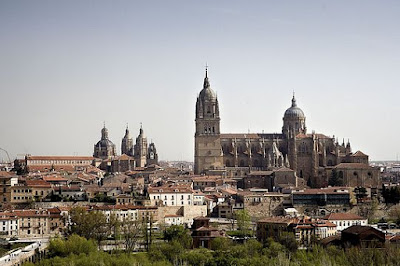 He nailed this one. I caution clients and peers that every artist is capable of finding lightning in a bottle at least once in their lifetime, so one should not dismiss a work based on notoriety, a signature or past performance.
From the internet: Jose Fuentes de Salamanca Born February 20, 1934 Salamanca, Spain Born in the village of Salamanca, Jose Fuentes adopted the name of his village so that his work and talent would always be associated with his birthplace. Admitted in 1946 into the Escuela de Artses y Officious where he studied drawings and completed preliminary studies that in time would guide his brilliant career. In 1952 he entered the Real Academia de Bellas Arts of San Fernando in Madrid, Spain. Versatile in every medium from ink to oil, the artist centered on the human form early in his career. Now internationally renowned, the master has centered his work on the life of Christ; and is now considered to be the greatest living painter of religion in our time. The crown in his career came in 1986. Commissioned by the Church of Rome , the Vatican to paint St. Francisco Palau y Quer, accepted by Pope John II, the oil now hangs in Vatican City along side the greatest masters history has ever known; elevating this artist to a plateau seldom reached in the world of art.
Posted by Blue Heron at 5:03 PM