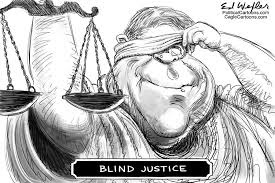 Florida Governor Ron DeSantis, in his new crusade for law and order, announced his intention to go after and prosecute those "scraggly antifa types."
There are all sorts of draconian new rules being proposed, more than seven in a group at a protest is a felony, now permissible to mow somebody down with your car in a demonstration, etc.

As a person who has resembled a "scraggly antifa type" at various times in my life I have to wonder at the legality of instituting a bunch of new felonies on the basis of how people look.

And I couldn't help but to think back to one Harry Snyder. Harry was on a pornography review board in New York in the early seventies. He had to go through countless films and make the determination if they were obscene or not. There was only one hitch. Harry was blind.

It has been a long time and you will have to forgive me for not remembering the exact quote but when they asked Harry how he knew that the films he was viewing were indeed obscene he said that they sounded obscene. “Pornography isn't a case of seeing, it's a case of feeling," he intoned. If the films went silent and he needed a little help figuring out what was happening on the screen during the quiet parts, his wife would sit next to him and fill him in.

Justice Potter Stewart had his own definition of pornography in 1964, "I shall not today attempt further to define the kinds of material I understand to be embraced... but I know it when I see it."

I guess it is the same rationale that Barr is going to use in New York, Portland and Seattle, and DeSantis is mulling over in Florida, if it walks like a long haired duck it must be a card carrying member of Antifa. Those whooshing sounds you just heard were your civil rights flying out the window.

It blows my mind how blind people are in watching their civil rights being degraded right before our eyes.

Morgan lives in Florida and you would not believe what is happening in the schools. They are considering expelling my grandkids because Morgan is insisting on virtual school