The sun turned a fiery red...

It has been such a strange weekend, with the air, fires and oppressive heat. Although the fire is eighty miles away in the Japatul Valley, there was a layer of ash on my car this morning.
The pollen count is up and I am having a hard time breathing, not helping my asthma at all. Having said that, it was a beautiful sunrise, the sky emulating Jimi Hendrix with its peach colored light.
To top it off I saw the young bobcat I saw last month bounding right in front of my car, not eight feet away.  Looked so happy and full of life. Has grown four inches, cute as hell. No camera, no time, will have to take my word for it.

There was a photographer taking shots of a model near the pub this morning in the rosy fingered dawn and I don't blame him, the light was truly magnificent. Model not bad. 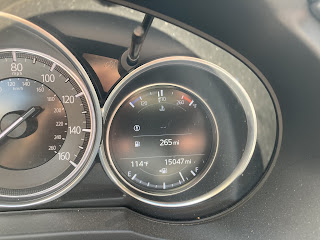 When I left my house yesterday the temperature gauge in my car, in the shade, read 113°. I traveled about a hundred feet west and it was 114°.

I called my neighbor and she said she got readings of 116° on Saturday on her patio, which is damn hot. So glad I have pool privileges. 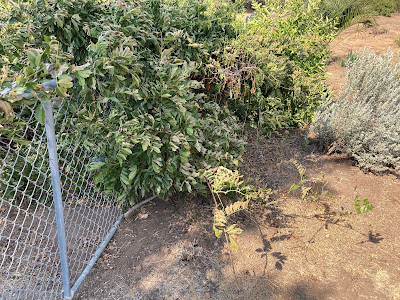 It is not helping the flora at my house. My wisteria, which is used to extreme heat, is not doing real at this temperature, when I got home yesterday it was dry and curled and saying, no más.
Same with the plumbago. And we have been watering the hell out of everything.

Saturday when I came back, the top of Willow Glen was about 107°. As I descended to the river valley I watched the gauge climb a degree about every hundred feet until I was at 113° at the bottom. Damn hot. 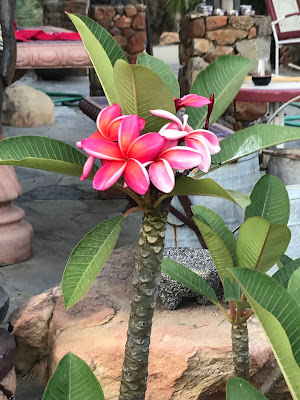 The neighbor had a rattlesnake coiled up on her porch the other day and asked me to stop by and help her deal with it.

It had scrambled off by the time I got there but I couldn't help notice the lovely plumeria in her courtyard.

And I'm thinking, I can't even grow a bougainvillea at my house in the extreme winter chill (we have had readings down to 14° at our house, the neighbor 11°.) How does she get off growing a tropical in the cold?

I asked her yesterday and she said it is the stucco wall, the reflective heat is the key. Aha! My other friend said that is why you see them planted near walls in France. Wish I had a wall...

Weather swings are intense. I called my friend Horsley in Colorado. It was near a hundred in Denver and they are expecting snow in the metro area tomorrow.

I remember a sixty point swing once in El Paso when I was a kid. Leslie and I once did a John Morris Michael Grimes show at the University of Denver where it was 85° in the morning and we were packing out in a horizontal blizzard in the afternoon. Rockies are a trip. 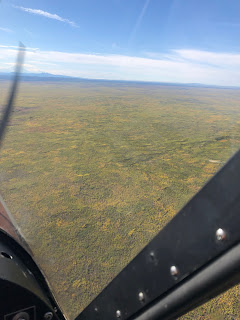 I called JB to tell him how hot it was at his southern spread and he was up in the air in Alaska on his way to a far off cabin. He said that it had froze the night before, would be nice to meld the two places. Here is a picture from his cockpit over the Alaska swamp, some of which he says is floating.

I have received some fun photos from you folks the last day or two. 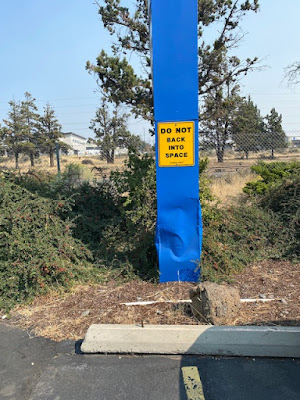 Michael is up in Bend, Oregon with his family and thought this sign was sort of appropriate in a town named Bend. Wondered if the sign or the impact came first? 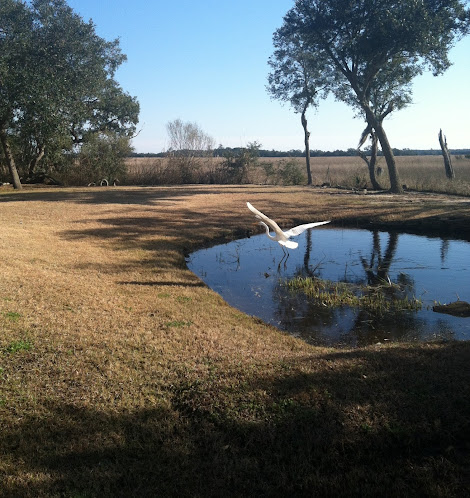 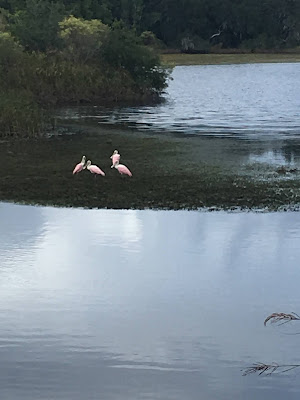 Lena forwarded pictures from her cousin Denise in Charleston's porch.

The pink birds are roseate spoonbills. I have never shot one except in a zoo. 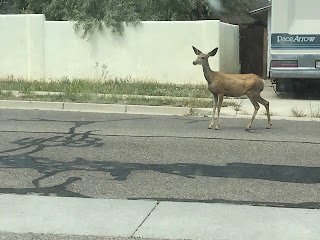 Millard sent a picture of a deer waiting at an estate sale at Los Alamos. For an incredibly gifted artist, Scrota Voce takes really shitty photographs. This one is fine, most are horrid. Maybe we should set up a page and buy him a decent phone? He sent me a picture of four coyotes that could have been Gumby, Pokey and friends they were so ambiguous. 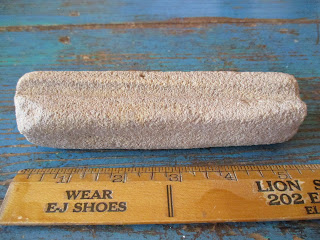 Saylor found a nice arrow straightener somewhere out in the badlands of New Mexico. 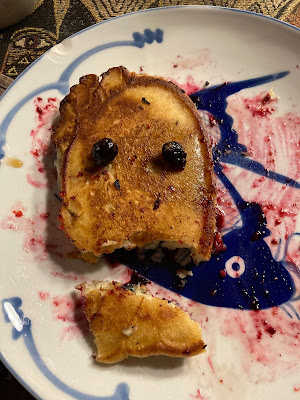 This is my robotic buttermilk pancake from yesterday. Leslie stuck raspberries in with the blueberries this time.

What an incredible difference the tartness makes. Even though the blueberries outnumbered the raspberries five to one, the latter stole the show. 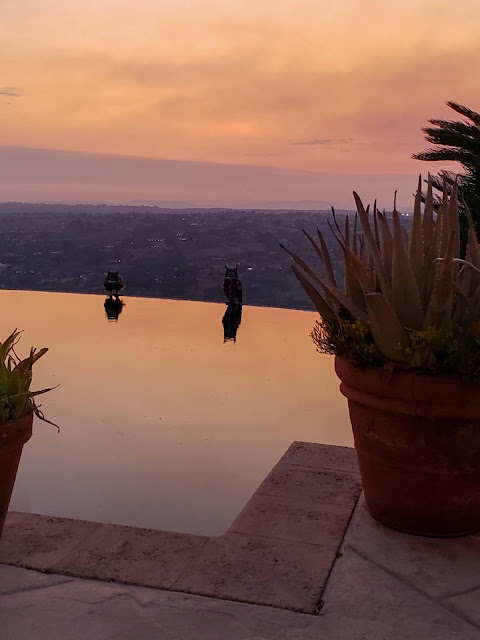 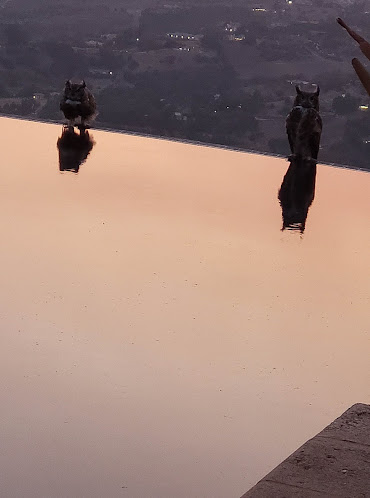 Don has never seen an owl at his house before. Yesterday he had two fly down and land on the edge of his infinity pool in the sherbety sunset. 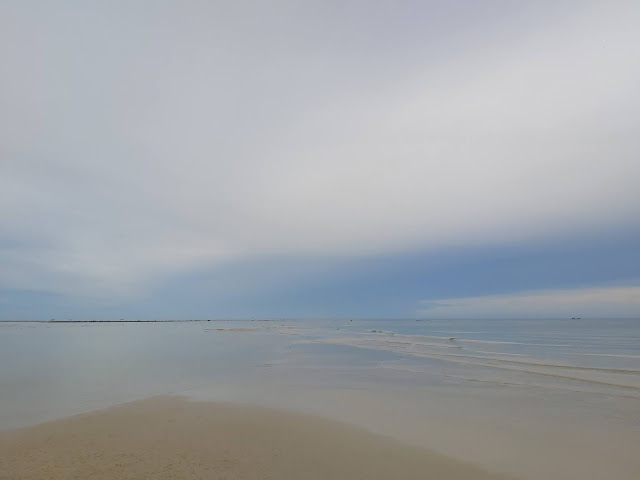 Shawn sends a pretty pic from Thailand, nice light airbrush effect. I think he has a new phone. I could straighten the horizon but I have not been hired and people get funny about such things. 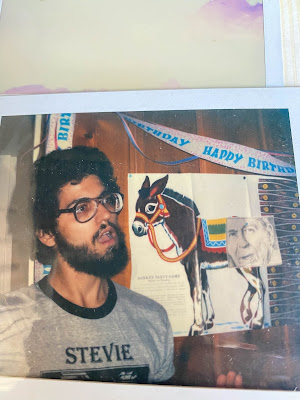 Dave sends a picture of a college era mois in my terrorist looking stage. Mustache was dreadful, political inclinations obviously already firmly set. I was pretty skinny back then, must have been taking diet pills or something...

Will sends a pic of his orphaned rescue cat Bruno. 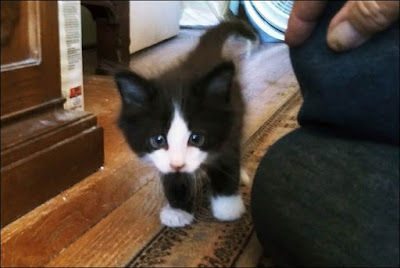 Cute as a button! Keep them coming... and stay cool! If you have any labors on labor day, may they be labors of love!
Posted by Blue Heron at 10:25 AM