My wife bought a large package of lox from Trader Joes last week.

When we opened it up last Sunday morning at Ron and Lena's we weren't sure if it was even cut or not, coming out in big glops of salmon.

Tasty but missing something. Texture was all wrong. Seemed like it had been manhandled somewhere along the way. Obviously cut and packed by a machine.

It was of course not always so. People used to have more respect for the delicacy. When Blumers was around, or at Cantors, Nate and Al's or Brents or any great urban deli, the nova would come out paper thin.

It was carved by hand by skilled fish cutters, now apparently a dying breed. You could get nova, which is cured and then cold smoked or belly lox, which typically comes from the salmon belly and is brined, but is usually a little saltier or you could order the more generic lox which is just smoked.

Will sent me this link today. From the Forward a few months back, Last call for a Zabar's lox slicer. The tale of a ninety year old lox slicer, sent out to pasture in the age of Covid.  Reminded me of another article from four years ago, A high holy call for lox and old hands to slice it at Zabars. 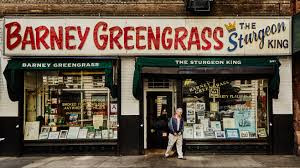 It was not a place I frequented when I lived in or visited New York, preferring the slightly grungier verite of Barney Greengrass the Sturgeon King. 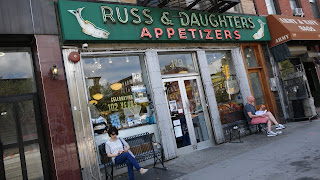 Both have been eclipsed by the cognoscenti at this point by Russ and Daughters.

I miss places like these, fear they will all be gone soon, the knowledge instilled in these old cutters hands after decades of precise slicing not long for our mechanized world.

When I was a kid in New York, often very broke, I would take a subway down to Battery park and South Street and go to the Fulton Street Fish Market. For two or three cents you could get a bowl of hot "sea broth" and all the oyster crackers you could eat. Those days are obviously long gone.

When Leslie and I sold at the Rose Bowl I saw the original Fulton Street Fish Market sign being sold for a measly amount, like eight hundred dollars. It kills me to this day that I didn't buy it.  Place has been open since 1882, been relocated and rebuilt but it's not the same place. Lost its emes a bisl.
Posted by Blue Heron at 9:43 PM

Nothing like thinly sliced Nova on a fresh hot bagel smothered with cream cheese... a nice tomato and a few dill pickles to round out the flavors. Ahhhh, Sunday mornings...