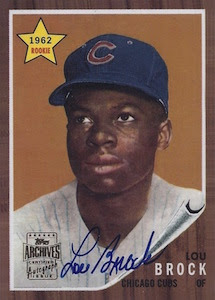 Sadly the baseball dominoes are falling, first Seaver and now Lou Brock, we have lost two titans of the game within a week.

The long time Cardinal was the penultimate base stealer, breaking the long standing record of Ty Cobb. I always loved it when the redbirds came to town, Gibson, Carlton, Brock and Torre. Great coach too in Red Schoendienst.

Brock was a true student of the game, buying a movie camera and breaking down film at a time when it wasn't done, in 1964, looking for any edge on the opposition.
He had a totally different approach then his predecessor, the flamboyant Maury Wills, taking shorter leads and running harder and faster. Brock was an extremely good hitter, with a lifetime .293 batting average.

His hitting and base stealing contributions helped the Cards beat the Red Sox in the 1967 World Series and ironically his trying to stretch out a double and getting nailed at home may have sealed their fate against the Tigers the following year in Game 5. Lolich then added insult to injury and picked him off base in Game 7.

I thought that it was interesting that Brock, the son of Arkansas sharecroppers, opened up a florist shop while still playing baseball. Obviously he was a renaissance man. Certainly one of the three greatest base stealers to ever play the game. I am very glad that I was able to see him play on many occasions.
Posted by Blue Heron at 9:16 PM