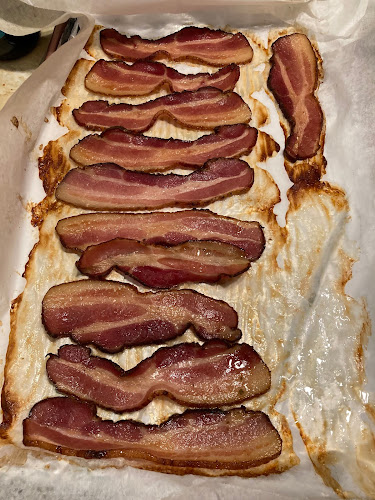 Deuteronomy 4:26 -  Thou shall judge the infidel by the quality of their rashers. If their bacon is inadequate, dust off your sandals and depart, then utterly smite their town for they are a nuisance and abomination to your lord.

We are making a new bacon today. Lord willing. Applewood smoked bacon with New Mexico Hatch chile. We bought it at Gelsons in Laguna.
Just had my first bite and it is delicious, subtler than you think, with a nice but not too extreme finishing kick.

Feel free to cue the jew jokes, my grandpa called it pink chicken. I will deal with any possible repercussions in the afterlife but feel that my pork transgressions will look minimal in contrast to some of my other more monumental failures and sins.
We know a devout woman from Chicago named Henny who will tell you with a straight face that she doesn't eat pork but thinks we somehow get a divine dispensation for bacon. Fine with me. 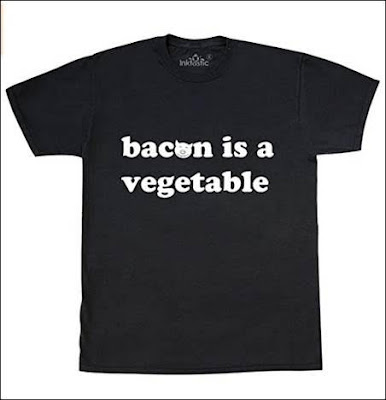 We have been getting our bacon lately at Costco, uncured, nitrite and nitrate free. Reasonable and tasty.
But we had bacon at our friends in Orange County last week that was truly superb, Hemplers, naturally smoked, no antibiotics, free range porkers who have been home schooled and fully indoctrinated in the liberal canon.

That was a great bacon.
Posted by Blue Heron at 9:06 AM

And, where did they get this connoisseur bacon? I think I need some!

When I was a kid I asked dad why he wasn't eating the pork chops at dinner. He said it was because he never are pork as a kid so he never got to like it. I must have been eight or nine. No religious reason,of course. I don't know if he made an exception for bacon.

I think that is b.s. He made plenty of salami and cheese omelettes for us. As well as jelly omelettes I might add.