This one interests me. I went to eleven different schools in my itinerant youth, before college. We moved a lot, tried to stay ahead of the bill collectors. And I think it was good for me, from a social - communicative perspective. Because I know people who were rooted in one town or socially isolated in their early life and they could never get that monkey off their back. You get pigeon holed in a small town and things get worse and worse. I think we are basically constructed between the ages of three and eight. I learned to become socially fluid and adept and adjust the persona as necessary, depending on the burg. They didn't know me long enough to lay anything on me that stuck.

I know perfectly wonderful people, some of whom read this blog, who faced this sort of isolation phenomenon. I think the damage is real.

I know I felt it. Tomorrow.

Hudgins sent this in; How a Plan to Save the Power System Disappeared. "A federal lab found a way to modernize the grid, reduce reliance on coal, and save consumers billions. Then Trump appointees blocked it."

Renee offers this: Burn Zozobra. And the biblical flood that will drown California.

Dave in Japan sends eight things to know before visiting his prefecture, Tottori.

My friend Matt likes to take pictures at airshows. Here is a link.

I liked this cute story in the New Yorker, Mrs. Nice Guy. Fillmore thought it was a yawner.

Shawn sent some pics of the beautiful flowers on his fishtail palm in Thailand. 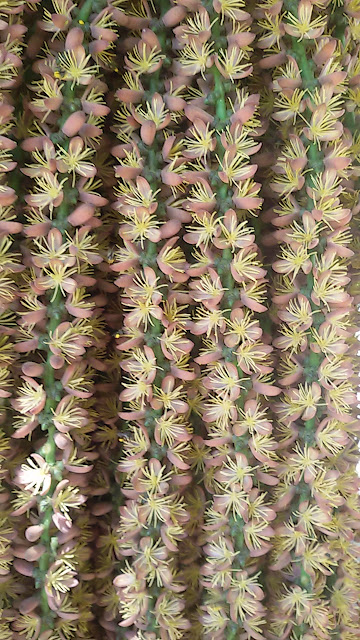 Will sent a story on Oregon's racist past.

Interesting Hal Blaine interview.
Posted by Blue Heron at 10:19 AM