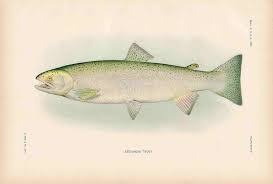 I would like to kvell a bit about a marvelous dinner Leslie made me tonight. I spent the day putting tax information together for my accountant. It's nobody's business honestly, but let's just say I will be paying significantly more federal income tax than the President of the United States, as I always do. Somebody has to keep the motor running.

Leslie called me in the afternoon and asked me if I wanted to run over to Major Market and pick up some Icelandic salmon, which is high quality farm raised and actually raised in the ocean. They were out of it when I got there so I had to refigure.

I knew she didn't want the Atlantic and so I bought the last half lb. of the wild coho. But out of the corner of my eye I saw these absolutely gorgeous fillets of steelhead trout. This can't be right I told the fishmonger, look how pink it is, it's got to be a mismark. No, he says, that's trout. We never buy steelhead but I thought, what the hell and went for it.

Leslie decided to give us some variety tonight. She cooked the coho with salt and cumin and red curry and served it over a bed of basmati rice.

For the steelhead she made a panko crust with panko crumbs, lemon zest, oregano, parsley, fresh garlic, salt and crushed chili flakes. The fish was coated in dijon and lemon juice and then dipped into the panko. It was then sauteed in olive oil. Butter was added when it was almost finished cooking.

I should have taken a picture. I am telling you the steelhead was so delicious it was eye opening. Inspiring. Subtle and nuanced. Delicate, certainly not as fatty but more flavorful. Far outshined the coho, surprising.

So what exactly is a steelhead and why does it so resemble a salmon? A steelhead is a rainbow trout that has found its way into the ocean. The salt water in the ocean changes their body chemistry. I guess they get very large, these fillets certainly were.

According to literature, the Steelhead trout is a name given to the anadromous form of the coastal rainbow trout (Oncorhynchus. m. irideus) or redband trout (O. m. gairdneri). They can grow to 55 lbs. and live for 11 years.

The Santa Margarita River that I live on has historically supported steelhead, the variety known as the southern California steelhead (Oncorhynchus mykiss.) There are anecdotal reports that some still remain but if they do, their habitat is being challenged by both non native fish as well as development and encroachment. They seemed to flourish here in the 1940's. The only local place that I know they still exist is north of us at San Mateo Creek whose watershed extends into three counties, Riverside, San Diego and Orange.

I am looking forward to sampling some more of this wonderful fish before the supply runs out. Try to do some more a-b testing and see if it is the fish or my wife's culinary genius that is shining so bright.

Robert, I have photos of the steelhead in the Santa Margarita from this year. I saw about 6. There is a spot where there is a very shallow rapid and they like to get perpendicular to the flow and have the water drag them down the slide sideways. They then swim upstream to do the ride again.