Every generation has its thing. In the forties it might be the jitterbug. The fifties took our youth to the sock hops or to the drive in with Linda Lou. My generation was a little bit different.

While some of my more responsible peers might be studiously prepping for finals on the weekends, my little group was as likely to find itself grooving to the sound of the Grateful Dead at some lysergically soaked venue somewhere in America's heartland.

And so I read with some bemusement yesterday that Vogue Magazine is now featuring fashion born in the parking lot of a Grateful Dead concert in 1977, arguably one of the two greatest years for them musically, along with 1974.
You can read the article here, Freaktopia Resurrects the Look and Vibe of a Grateful Dead Lot.

Despite existing travel bans, Freaktopia offers (visual) trips aplenty. This just-launched brand, a collaboration among photographers Craig McDean and David Mushegain, artists Phil Brown and Mikio, and others, has been about 12 years in the making, but the story really begins in a Grateful Dead lot in 1977.

It’s there that Brown and Mikio met and started traveling with the band, which they did until Jerry Garcia’s death in 1995. On this long, strange ride, the art partners were mentored by Ed Donahue, and like him, made and sold T-shirts in parking lots. “We always felt that we were doing work for a community that we were a part of,” noted Mikio on a recent call. “We all felt we were cocreating a scene.” 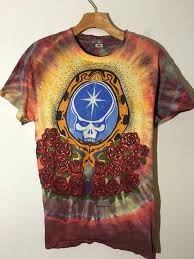 I don't know why but I find this kind of hilarious for a variety of reasons. I was at a lot of those parking lots in 1977, knew Ed Donahue pretty well (and frankly loved the guy, who was a great artist and very sweet and humble man.)
A lot of us stuck our old favorite t-shirts in a drawer but I think very few of us thought they would be selling now through designer boutiques for prices starting at $350, with many now turning over in the vintage market for over a grand. I think I remember ten bucks was tops at the time. Money was, for some reason, a very small part of the equation, no one cared about your status or your bank account. Were you kind? Did you listen to the music play?
There was a happy ethos back then, you didn't make money off your brethren, tickets sold at face value, it was more about tripping around having a good time, helping each other out and surviving frankly, perhaps not creating a fashion statement so much as a psychedelic or life statement. Money was something that hopefully could get you to the next gig.
My how things have changed...
I am a relatively young guy, was pretty late to the Grateful Dead, unfortunately didn't start listening until 1970 and 71 and didn't start going to shows for a year or two after that.
But when I did get on the bus, I was sold. Felt very lucky and very happy. Saw many hundreds of incredible shows and made lasting lifelong friendships that have stood the test of time to this day.
I look at the shows in 1977 with some reverence, from the Swing to Winterland to Cornell. It was a phenomenal year. And the scene truly coalesced as did the occasional purple dragon.
Never in my wildest dreams did I ever think it would become a sartorial cash cow in the future. But I guess in an age where people pay other people to tear holes in their blue jeans for them I should have expected it.

I like Mikio's work a lot and actually think this whole thing is quite hysterical. Make a buck, why not? Sell tie dies for thousands of dollars, when in the day we did it ourselves with some Rit dye and a bucket. I hear they look great with Jimmy Choos.
But what's next, kind veggie parking lot burritos at Chez Panisse starting at $38 an entree? Ripple sponsorships? We already have Grateful Dead underwear, shoes, socks and soap, an early idea of mine that I should have actualized. Maybe high end designer acid vacations, their time has certainly come.
Ankor Wat, Haleakala or Timbuk Five. Time to trip again before we all end up on oxygen tanks or in assisted living.
Wonder if all this chic placement stuff could pass the acid test? The old look at the mirror truth serum thing? Or is it just the right time to cash in and go mainstream? Or past time... Jokes definitely on me, easy to spot the actual anachronism.
Who may have something to sell you.
Posted by Blue Heron at 3:54 PM

You didn’t mention Grateful Dead deodorant. I kid you not!

Loved the nostalgia trip. Never became a true Deadhead. I was a bit too old for that scene, I guess, but now & then I'd journey south to catch them in SF and definitely never missed a performance at Autsen stadium which was just down the road from where I lived in Portland. Good times...

It's kind of strange these days, I've inherited lots of old wonderful stuff from my family, crystal, china, furniture and such, but the younger generation isn't interested in that. But an old pair of bell-bottoms and hand-tooled leather belt from the 60s? Much in demand.

That sure is a cute picture of you! What a doll!!!