I think the push to change the name of the Atlanta Braves is beyond ridiculous. What in the hell is wrong with Braves? Not like the Washington Redskins, which is plainly derogatory. I would think anybody would be proud to be referred to as a brave. People say change it to the Hammers but that sounds a bit contrived and gratuitous to me.

Speaking of the hammer, of course Henry Aaron is dead. Hammering Hank was a hell of a player and hitter, he took a lot of crap for breaking the white guy's home run record, was subject to a lot of racial abuse.

And he always seemed bummed out, much like my favorite player of all time, Willie Mays. They both seemed very unhappy.

I may be getting an Aaron signed Milwaukee Braves baseball to sell from Roxanne. Will include a picture if I get it.

Lasorda passed pretty recently. I always thought that although he had the gift of gab, he was not a very nice guy underneath, he was a bit of a bully. I never liked the Dodgers, being a native San Diegan, we always were like red headed stepchildren to the guys in blue. Scoreboard, they won World Series's and we didn't but I didn't have to like them and never have.

I used to know the late Duke Snider. He didn't like Tommy much either. I once asked him why and he said because Lasorda had the Dodgers fire his best friend, pitching coach Ron Perranoski. Stabbed him in the back. Lasorda was the only Dodger not invited to Duke's funeral. He told me that he thought he was a fake too. Not real classy to speak ill of the dead but they are both gone so I think I can finally spill.

I was talking baseball with my friend Warren this evening. He said he lost interest in baseball in 1957. A lifelong Brooklyn fan, he could never forgive or forget.

He posed the conundrum, you have two bullets in your gun and Stalin, Hitler and Walter O'Malley in a room. Who do you shoot?

He said you shoot O'Malley twice.

Loughlin told me that I have to watch the Battered Bastards of Baseball, a Netflix documentary of the now defunct Portland Mavericks baseball club. Scores a 100% on Rotten Tomatoes, I need to see it. 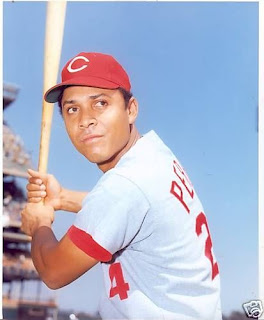 The Big Red Machine of 75 and 76 had the greatest lineup of my lifetime, at least offensively. How does the 1976 team compare to the 1927 Yankees? This guy says they were better.
Posted by Blue Heron at 6:43 PM

Watched the documentary a couple years ago. Childhood friends husband, Dan Parma, played for them.I sent you a link to a 2014 interview. Will bring the Henry Aaron ball to you soon.

Shoot O'Malley twice ! That is REALLY funny !!! Believe it or not, Brooklyn was my first favorite team, starting around age 8 or 9. I couldn't quite wrap around the fact that they moved, being only 10 at the time. Continued to follow the players...Hodges, Campy, Koufax, Drysdale, Furillo, Podres (my fave)...but wasn't quite the same. I remember being so sad hearing/reading about Campanella. Can still see the newspaper article in my (feeble) mind. Speaking of Podres, I had this Cadeco-Ellis baseball game that I was ADDICTED to. I made sure Podres never lost ! And I still have Jim Bunning's no hitter on a scorecard. The only no hitter in the thousands of games I played. (Obviously, all this explains everything you need to know about me... Ü)

Willie Mays was, and still is my favorite baseball player of all time. You and I share the experience of attending Willie's first game as a New York Met (he hit a home run!). They went to the World Series that year. I was lucky to attend one of those games. I remember stressing on the Whitestone Bridge traffic jam, Shea Stadium lit up...total despair. My mom managed to keep me and my little brother relatively calm until we made it to our seats in the 2nd inning.

I also loved Hank Aaron. Saw him hit a homer at Shea the same year I saw Willie hit one as a S.F. Giant. They may at times seem not so happy, but they sure as hell give me something to smile about.

Funny Vlad, what do I remember most about the game? Well besides the homerun, which was epic, even way up in nosebleed where we were behind the plate. We didn't go to Shea that often but this time we stopped in Coney Island on the subway and I had a blueberry knish. Never had one before or after, that is the memory that sticks with me.I think the journey started on the Canarsie line from 14th st. IND, BMT, IRT, who knows?

I met Tommy Lasorda at a sushi bar in Brea back in the 80s. He came in and introduced himself to each person there. In 2018 I sat a couple seats over from him behind home plate at Dodger stadium. My first hand impression was that he was a very nice guy, and definitely a baseball legend.

Lasorda and sushi. You either like them or you don't.