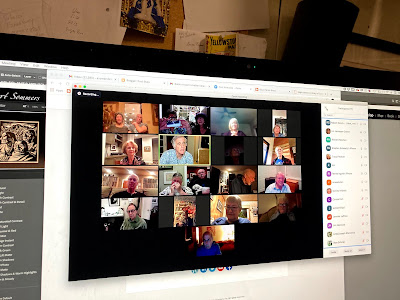 Last night we had a wonderful zoom meeting to talk about the inaugural day and the recent events that we are all processing.

I am not all that familiar with the ins and out of zooming so Kip ran me through a trial session in the afternoon.

I invited some of my more thoughtful and intelligent friends, the people that have always shown a deep commitment to our country and its core values.

Many could not make it for one reason or another, bandwidth, shyness and other commitments. Some had problems dialing in. But those that were there came through in spades.

6:30 came and most of us were assembled.  I started the call, a little tired. I quickly got my second wind. Leslie cracked the champagne.

We had people near and far, from Thailand, New York, Los Angeles, Michigan and even Fallbrook. Many were strangers to each other, only knowing the others perhaps through an occasional blog comment. They were not strangers for long, soon they were kindred spirits.

We all had a quick toast and I gave this preamble to get things started:

I want to thank all of you for coming and celebrating this wonderful day, the end of Donald Trump’s presidency and the beginning of Joe Biden’s. Although some of you are strangers to each other, every one of you is a great friend of mine and I know every one of you has a love for our country, our constitution and our planet.

The number for the day is 2,104,818. That is the number of minutes in the Trump presidency and I must confess, each one of them was very painful to me. In the 1461 days of the reign of Trump, many of the policies and customs of our land have been trampled, shredded, sliced and diced but thankfully, we are somehow still standing.

Donald Trump was a sewer dive into our worst tendencies, may we never explore this part of our national id for the rest of our lives. He has established a bottom that will be hard to bottom. In the end we were shown that his party would tolerate pretty much anything from him in order to get the useful idiot to fulfill their social agenda and stack the judiciary.

But enough about the past. We now have a new President who fully knows the lay of the land. President Biden is a good and smart man who will not be punked by the opposition. He was in the senate for too long. And while he desires unity and comity he is not going to give away the store and forget his core values.

I didn’t watch the inauguration this morning, I was out buying plants for my garden. Typically I read the transcripts. But I have heard from several of you who were seriously touched and impacted by what they heard. We have some hope again after a long period of darkness. The ring has fallen into Mt. Doom and Earth and middle earth have a shot again. Things are far from perfect and the forces that brought the orange monster to power are still around. There is still a lot of work to do to clean up the Shire. Let’s show the world and ourselves our best side again.

I want to ask for people who would like to speak about this day, what we have endured and what is yet to come.  Please introduce yourself and tell us where you are from. Afterwards we will have a quick toast to the new President.

Not exactly Lincoln, Douglas or William Jennings Bryan but somebody had to start us off. Pardon the Tolkien references if it is not your bag. Anyway everybody took a turn sharing their feelings and thoughts after that and I learned something valuable from everyone on the screen. Some people were powerful and poignant, some even sad, all well considered and worthwhile. I believe it was a cathartic release for everyone to share after such a charged, traumatic, topsy turvy month in our nation's history. If I have a good opportunity to do something like this again at the right time I will do so.

Sort of a real time blast continuum. And in the end we even got a beautiful song. Try to be there next time.

I wish I could have been there! ~ Diane O'Bannon