The king is dead, long live the king 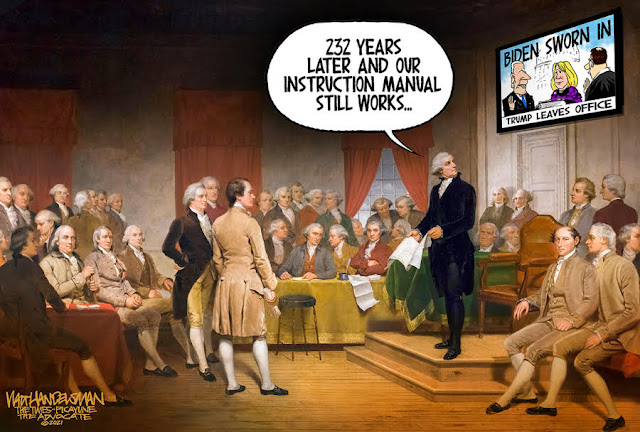 I was talking to a rather wealthy friend the other day who tilts to the conservative side of the ledger. He wanted to ask me an honest question.

"I made 40% more money in the last four years," he said. "Name one bad thing that Trump did that gets you so upset. I think he did a lot for our country."

Gee, I thought. Where do I start? I told him that two things that immediately came to mind was the President talking about the good people marching at Charlottesville. I, for one, do not believe they existed. It was one of many salvos, dog whistles and incitements that helped inflame the ugly specter of racism in this country. And it has gotten worse, the white supremacism once confined in certain people's heads is now visible on comments sections, websites and on daily public display throughout our country.

I think that this sort of trolling and empowering of our worst base fears and racist tendencies is probably the most malignant sin of his administration. And it was conscious and concerted and it cemented his appeal with a non educated white underclass that was fearful and felt marginalized.

The second point that I brought up was the environment. What Trump did to the EPA and Interior in the name of deregulation was despicable and criminal. We will be dealing with the effects of his craven policies and war on science for a long time. Our air, water, earth, fellow creatures and own bodies will suffer for his misguided and awful environmental edicts. When it became a choice between big business and sound environmental policies, big money won every time.

My friend asked me what is the point of being out front environmentally if India and China don't follow? This is a common refrain and I understand. But the America I know and love is a leader and we must lead. The rest of the world looks to us. You don't continue off a suicidal cliff because other people are heading to the cliff. You stop what you are doing.

There is a funny refrain coming from those on the right the last few days. It is Joe Biden's job to unify the country and doing [your pick here] will not help with that unification among the seventy million people who voted for Trump. And I have to ask myself why the sudden interest in unity?

Where was this cumbaya spirit during the last four years of Donnie's reign when those on the left were met with constant catcalls of libtard and snowflake? Where was their desire for bipartisanship then? When did the right give a rat's ass about the feelings for the majority of America who delivered the popular vote for Hillary Clinton?

Now they are supposed to make nice because the right has suddenly lost all three branches of government. We will remember Merrick Garland. And the constant and never ending Benghazi hearings. And there will be no unity or forgiveness until there is some accountability. Especially with the recent insurrection. Trump is your monster, you rode him into town, own him. Confession and absolution before redemption.

Donald Trump is the worst President I have experienced, certainly of my lifetime. Andrew Johnson may have been more craven but I don't know, I was not around. It is not just that Trump was a toxic, cynical man without ethics or any ideology beyond himself. It is that he was also an incompetent bumbler whose ineptitude confronting covid has now resulted in a loss of over 400,000 lives.

There is no reason we should be trailing the rest of the world in fighting this epidemic but we are. Because he politicized his denial and made it an issue of personal and religious freedom. He and his followers and administration would not wear masks and they would congregate publicly and hold superspreader events in the Rose Garden and the rest is history.

And so, in a few short hours, he will be history too. He may try to resurrect the Trump show for a comeback sequel, my guess is that his continuing presence will further split the establishment GOP from the base monster he unleashed from the box. Many of his co-conspirators have now been pardoned. It will be interesting to see if the New York Attorney General can penetrate the teflon fortress and make anything stick. The man knows how to skate and evade.

We now have allies like Senator's Graham and McConnell at each other's throats, look for more of that to continue in the future while this problems attempts to sort itself out. You have a divided GOP with a Rand Paul/ Josh Hawley isolationist wing, a Liz Cheney/ Lindsey Graham hawk wing that really doesn't know what it wants to be. And also it is a party that has long preached fiscal conservatism but only when the other guy is in office. When they have the reigns they spend like a drunken sailor on leave in Okinawa.

The democrats have their own schisms of course with the Tlaibs, Omars and AOC's chiming in from the left. Bernie Sanders running the Budget committee should be a real beaut. Did you know that he was the average Trump voter's number 2 pick in 2016?

How about we start a new center party and break off from the fringe on either side? Would that work? I guess we can worry about that sort of stuff later. Today I will just be glad that the Trump presidency is over and that we still have a country and democracy standing. Just barely. It was close there for a minute.

And I hope we never have to deal with a psychotic, narcissistic bumbler like him at the helm again. Hope we learned a lesson as a nation but somehow I doubt it.

If you want to join me in a zoom toast to the new President and administration this evening email me.

A agree with every word you have written, however, I think the very worse thing Trump did was to incite a riot at the Capitol. It was not just his words Jan 6, it was his words for the last five years. It is truly, a day that will live in infamy!

Of Trump's supporters, the ones who are whining and crying the most are those that least benefited from his policies. Specifically, the low-to-middle-class white supremacists who sincerely love Trump, including, hypocritically enough, hard core Christian evangelists.
Trump's wealthy backers, like your friend, are not all that upset, they had a good four year ride, now it's back to business as usual, no big deal.