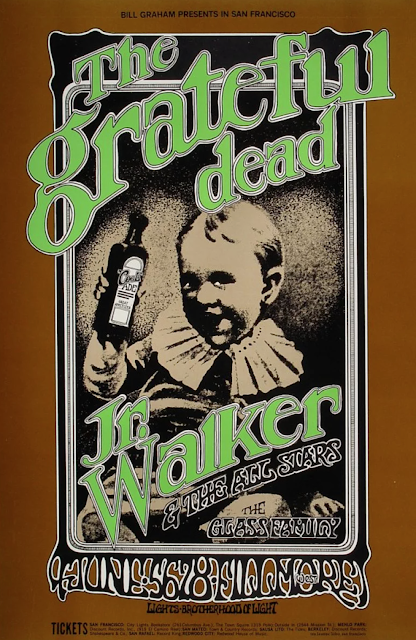 This is a very interesting show if you are into the music of the Grateful Dead. I first heard parts of it on Sirius Radio recently.
Skip to the 47 minute mark for the section that piqued my interest. A thirty five minute Turn on your lovelight but no Pigpen and no Jerry.
Why, you may ask? Because a local and infamous dealer named Goldfinger had wickedly dosed the communal apple juice backstage with LSD.
Like the Randy Tuten poster for the show so presciently depicts, the kids were really drinking the electric koolaid that night.
Everybody was comatosed, including Phil and Hunter. Elvin Bishop and Wayne Ceballos from the band Aum stepped in and helped things along on guitar and vocal respectively. I really enjoy Elvin's playing and singing on The Things that I used to do, especially in the spirit of this particular evening.
Purportedly, Robert Hunter wrote Black Peter after and because of this night. Jerry finally picks up his lost marbles and plays on the song Cryptical envelopment forward.
My friend Vlad says he has a hard time listening to the Dead from 1969, the music is so Cranial. Better eat your wheaties for this one.
From Phil's book searching for the sound: "While waiting for our set to begin, we were passed an innocuous looking (except for the faint subliminal glow emanating from the liquid, and barely noticeable sediment at the bottom) bottle of - apple juice! Without any hesitation we each sampled the bottle and passed it on. as soon as the juice hit my taste buds my entire consciousness went into "Oh Shit" mode - I had never experienced the taste of acid like that before. Normally one would ingest less than one hundred micrograms (Ten Thousandths of a gram) and it would be completely tasteless. For the taste to be perceptible, there must have been one Hundred milligrams (one thousandth of a gram) in each mouthful. We later found out that not only had Goldfinger with his usual prankster attitude, hit the bottle, but that every other acid cowboy in town had added their gram or two's worth".
Posted by Blue Heron at 4:38 PM