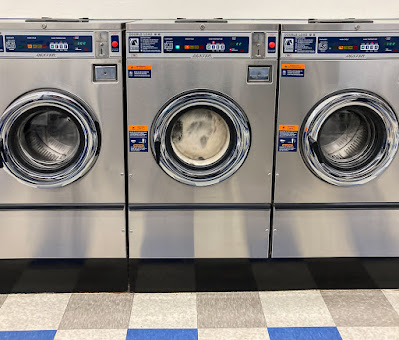 My recollection might be a bit off but being a kept and basically incompetent man, I do not believe I have done my own laundry for over thirty years.

I think I tried once early on and accidentally dyed my wife's clothes a pretty pink color and she said you are fired. I have been banished from the laundry room ever since and frankly, I am cool with that. Not really welcome in the kitchen either.

I broke my laundry streak this week. I needed to clean my sneakers and she said we were not going to do it in our machine, which she says might be on its last legs.

When you live on a ranch or a rural area, pants and shoes get dirty, even the ones you want to keep clean. Things pop up and you deal with them and even the good sneakers end up looking like hell.

You could clean them or if you are basically a lazy sod like me, you buy a new pair.

New Balance is now gone in Cardiff, the online shoes don't always fit and I don't feel like going to the Nordstom's rack because it is iffy. So I decided to clean seven pairs of tennis shoes, some of them really nice ones, just caked with mud.

I sussed out the local laundromats and finding one that fit the bill, near Grocery Outlet, commenced to cleaning. My pal who is an expert at such things said to take the soles out and to tie the laces. I did so. Woman behind the counter suggested two pods. We never had pods back when I was doing laundry but that was a long time ago and things have changed. We didn't have citizens storming the Capitol back then either.

I had heard two schools of thought on the dryer. Most said don't, your shoes will shrink but I didn't want to wait three days to wear them so I went with the five minute blast at medium heat to just get a little moisture out of them. Then I air dried them on my upper deck.

My feet are comfortably in my favorite pair of sketchers but I have two comments; the material feels rough and different and none of the shoes are as clean as I had hoped. My friend and surrogate parent Jean said that I should have scrubbed them with lava soap first. Live and learn. Any of you have sneaker cleaning tips that you would like to share? 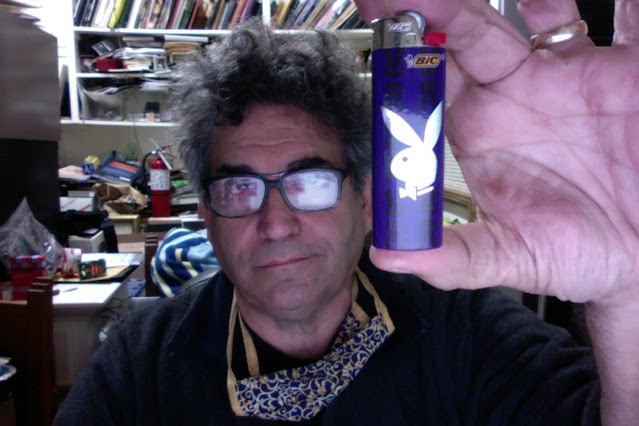 Since I am focussing on the mundane so as not to belabor our nation's sordid current events and this will be a stream of consciousness day, I want to let you know that I bought a new lighter yesterday.

I felt like having a puff. Don't think lesser of me but it is legal here in California and my back is hurting and I found myself sorely needing a medicinal boost.

I went to the Circle K, a tienda I typically just ply in order to procure my favored thrifty black cherry ice cream and asked for a lighter and a lottery ticket.

Ticket was a bust, lighter this swank playboy model, so seventies. I told Leslie and she asked why I didn't give it back but it certainly makes me look like a player and I think I will keep it.

Anyway on a different subject I mentioned Grocery Outlet. It is a curious store, you might find something you really love, like the lu belgian chocolate cookies for instance and the reality is that you will probably never see them there again because lightning rarely strikes twice in the same place and they are a discount, close out buyer. But for a person long interested in the concept of intermittent rewards, see Buy stuff, kill monsters, win gold, place is a gold mine.

So I am there the other day and I see this large package of bacon ends, a European style mix with a strange cure and color. Leslie cooked some up and I liked it, having a strong flavor and sweet caramelization. She was not so keen on it but thought it would be beautiful in coq au vin. 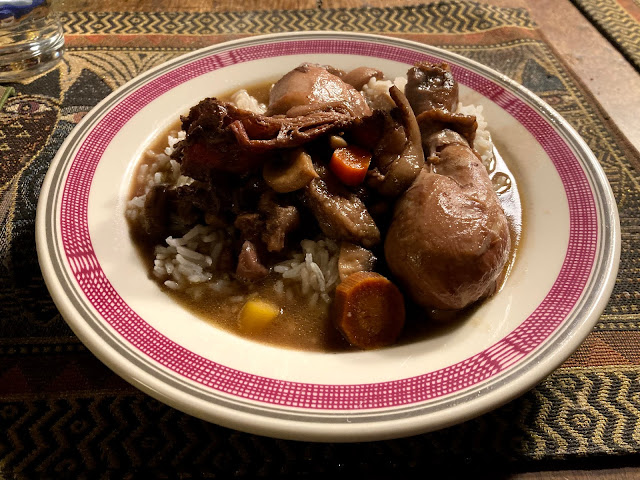 It was. So if you are keeping score at home, she does all my laundry and she also makes me delicious coq au vin. Lucky man.
And while talking about food, I would be remiss in not sharing pictures from Lena and Ronnie's latest gustatory feast, bouillabaisse with caviar appetizers.
Eileen was over for dinner and they went to town. 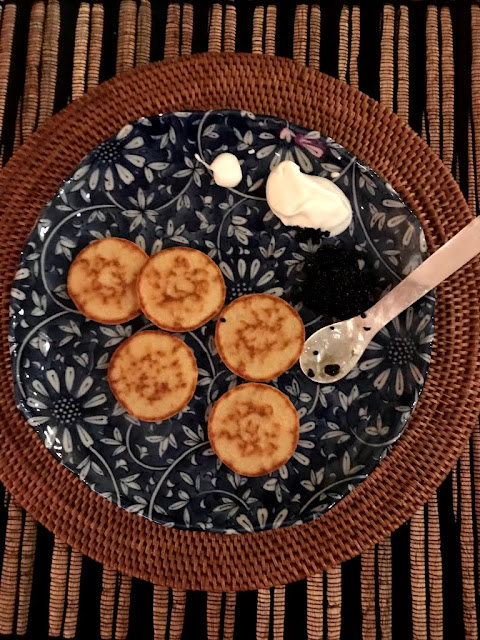 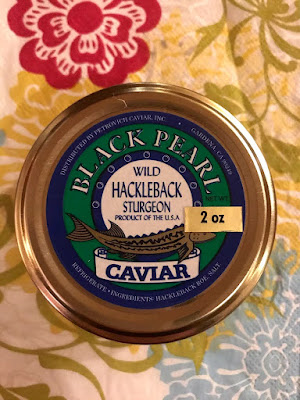 First course caviar and blinis washed down with a good champagne. 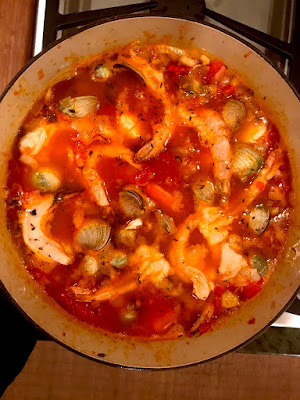 They made a killer bouillabaisse, with cockles and a big chunk of king crab. Switched to pinot for libations. 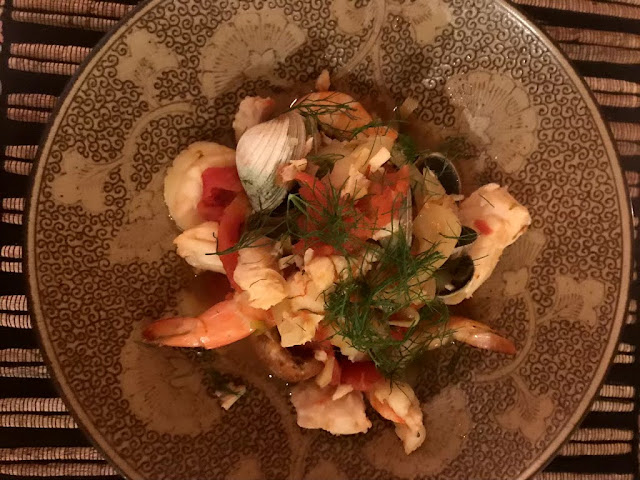 I'm honestly sorry I missed that meal. Looks incredible although I am not a big caviar guy.
Anyway the title of this post is laundry, food and crap and I fear I must get to the third member of the trifecta, the crap part.
It appears I have let my septic system deteriorate horribly. Haven't pumped it in a decade or two.
Last time I did they said it was only half full so I thought, hey, it's working so swimmingly, why bother?
Bad move. I thought I was shitting pretty and I wasn't. The gasses (and baby there are plenty) apparently deteriorate the tanks if left unintended and I had pushed this poor tank far past its earthly limit, Robbie's lunkers notwithstanding.
I called a company in Valley Center to pump the tank, the Fallbrook expert's phone no longer working and they sent a man out to pump the tank.
I got home in time to see him sitting on a bucket, four feet up a veritable mountain of my turds with a grim look on his face. One of the five worst jobs in his tenure as a septic sucker. His tattoo flamed arms held a vacuum hose and I watched my scatological issue on its farewell excursion back to wherever such effluent makes it final departure from the mortal tank.
The smell was unbearable. I am looking at this guy and thinking, how can a human do this 24/7? What kind of saint am I dealing with here? Great job for a covid survivor who has lost his sense of smell but I would not be personally capable. Glad he was there. Charged me an extra $150 for my gross indignities. The doodie duty I suppose. Turd tariff. Shitty surcharge.
And told me that my system will need about $5k of remedial work to work properly again. New T's divider, lid, risers. I am glad I am flush at present so that I can flush in the future. Trying to get a couple bids but it is definitely the shits. At least I got my money's worth out of this one. Whole new tank is upwards of 10k. (second bid was over 12k)
I could keep you posted but have probably already spilled too much. Anyway, watching this guy work with that hose, I did have a personal epiphany. Dude, don't ever complain about your job. Do you know what you could be doing instead? 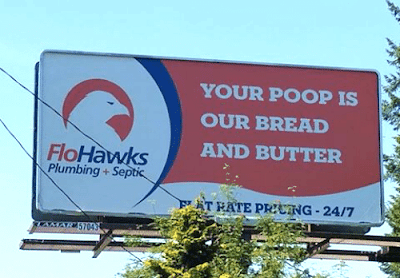 I read that people who have dirty jobs tend to be happier than average. Perhaps it is the crisp divide between work and off work. I dunno, but I do know that I spend a couple of hours or more in the pigeon lofts cleaning them out and I seem happy enough.

Told you about the septic tank issues :-)

Most septic systems need to be pumped and flushed at about five year intervals at most so you sorta lucked out in not paying for those procedures but, as they say, 'ya snooze, ya lose'.