I bought an interesting photograph recently. Well, interesting to me anyway. Extremely rare, I have never seen another one of this subject. I have showed it to a couple of people and two auction houses and I guess that it is considered crass and off putting in today's politically correct world. Not interested.

You see it depicts people in blackface. And that bothers some of the more woken people today. 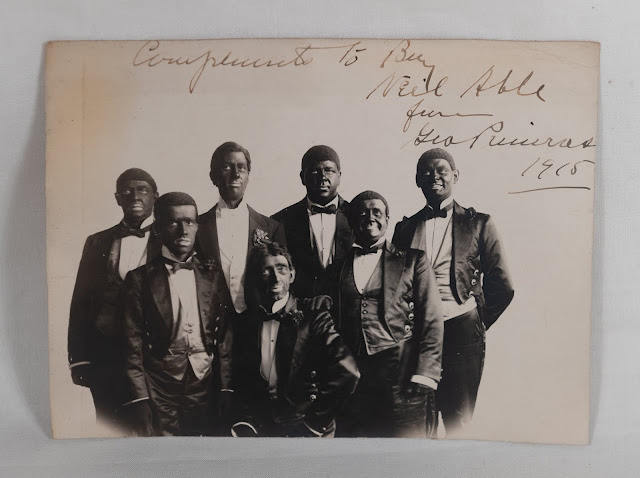 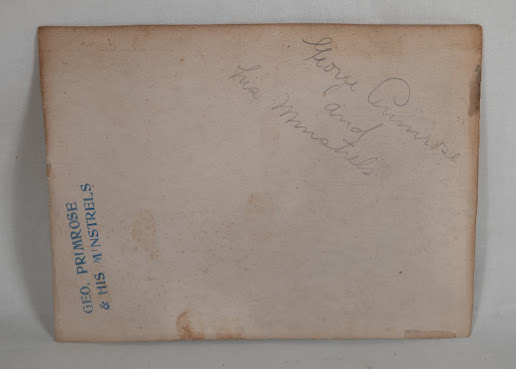 The subject is one George Primrose and his Minstrels, one of the leading troupes of his day.
At one time they were known by a far more colloquial and disparaging name. 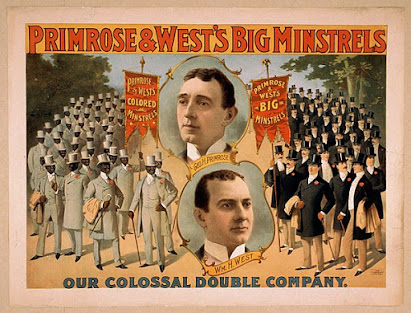 George Primrose (1852-1919) was a Canadian, an early vaudevillian, working with then partner Billy West in a two man song and dance team back in 1877.
Primrose was known as a wonderful dancer and the minstrel act was said to be quite high class and sophisticated.
The minstrel phenomenon started in the northeast in the 1830's. It rose to prominence as a national craze in the late 1840's.
Although the minstrel shows were extremely popular, being "consistently packed with families from all walks of life and every ethnic group", they were also controversial. Integrationists decried them as falsely showing happy slaves while at the same time making fun of them; segregationists thought such shows were "disrespectful" of social norms as they portrayed runaway slaves with sympathy and would undermine the Southerners' "peculiar institution".
Many performances followed a familiar three act theme. The shows died out around 1910.
Minstrelsy and black face is looked down disparagingly and with opprobrium today. It would shock many people to know that some of its biggest fans back in the day were black people. Rather than be offended, they celebrated and refined the art form. In fact black performers were there at the beginning of the art form.

In the 1840s and '50s, William Henry Lane and Thomas Dilward became the first African Americans to perform on the minstrel stage. All-black troupes followed as early as 1855. These companies emphasized that their ethnicity made them the only true delineators of black song and dance, with one advertisement describing a troupe as "SEVEN SLAVES just from Alabama, who are EARNING THEIR FREEDOM by giving concerts under the guidance of their Northern friends."

In fact white minstrelsy was ultimately doomed when black minstrels decided to take their place. Frankly, they sang better and they danced better. And like it or not their black audiences loved them.

African Americans formed a large part of the black minstrels' audience, especially for smaller troupes. In fact, their numbers were so great that many theater owners had to relax rules relegating black patrons to certain areas. The reasons for the popularity of this openly racist form of entertainment with black audiences have long been debated by historians. Perhaps they felt in on the joke, laughing at the over-the-top characters from a sense of "in-group recognition". Maybe they even implicitly endorsed the racist antics, or they felt some connection to elements of an African culture that had been suppressed but was visible, albeit in racist, exaggerated form, in minstrel personages.They certainly got many jokes that flew over whites' heads or registered as only quaint distractions. An undeniable draw for black audiences was simply seeing fellow African Americans on stage; black minstrels were largely viewed as celebrities.

I have written before about the love African Americans had for the most beloved black face of all, Al Jolson:

As early as 1911, at the age of 25, Jolson was noted for fighting discrimination on Broadway and later in his movies. He promoted a play by Garland Anderson which became the first production with an all-black cast produced on Broadway. He brought a black dance team from San Francisco that he tried to put in a Broadway show.; He demanded equal treatment for Cab Calloway, with whom he performed duets in the movie The Singing Kid.
Jolson read in the newspaper that songwriters Eubie Blake and Noble Sissle, neither of whom he had ever heard of, were refused service at a Connecticut restaurant because of their race. He tracked them down and took them out to dinner, "insisting he'd punch anyone in the nose who tried to kick us out!"According to biographer Al Rose, Jolson and Blake became friends and went to boxing matches together.
Film historian Charles Musser notes, "African Americans' embrace of Jolson was not a spontaneous reaction to his appearance in talking pictures. In an era when African Americans did not have to go looking for enemies, Jolson was perceived a friend."

In any case, history be damned. People would rather be offended by the mores of the past and deny reality and history because it is inconvenient and difficult to square with today's most enlightened citizenry.

Photo is not my aesthetic but historically very important especially with this eye opening blogpost. I had to look up OPPROBRIUM (Latin origin lit. 'infamy' / ob- ‘against’ + probrum ‘disgraceful). Will add to my lexicon as well as vituperation and obloquy.