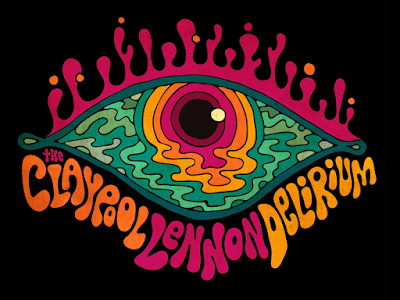 Although we already have tickets to see the band in San Diego in a couple weeks I told her that I would love to join her and two girlfriends last night at the show.

She of course saw the band up north last month and really enjoyed them.

This was Floyd's first track on their seminal debut album, Piper at the Gates of Dawn. Penned by the immortal Syd Barrett, of course. Back when the band was good, before all the Dark Side commercial dross.

Claypool Lennon Delirium did a remarkably fine job of it, great keyboard player, facile drummer. Both Sean Lennon and Les Claypool are excellent musicians. But as they moved into their own material, Cricket and the Genie I realized the problem for me.

The Grateful Dead's stalwart bass player Phil Lesh once famously proclaimed that "psychedelic music is what you listen to when you are tripping." It could be anything, Mitch Miller, a faucet dripping, Polka, it merely requires the sacrament to broach the osmotic gradient. I went to communion and never got my wafer. Spent all night on the outside of the church.

It didn't really feel like many other people were psychically ecstatic either but admittedly my antenna might be a tad rusty. Seemed more like a post psychedelic costume party to me. But people were happy and the music was pleasant.

For the rest of the night I was moving comfortably in a King Crimson, Pink Floyd, Hawkwind acid bubble. Elegantly crafted, seamlessly delivered but orchestral and tight rather than in any way improvised or open to a chance visitation from the host. Slightly monotonous at times, not a lot of tempo shifts.

Here is a video of the Court of the Crimson King last night for you to taste. I took a video too but it is way too big to share and I think this one is better.

Well done. Definitely. Psychedelic? Hmmm. Kind of like the last time I saw Yes. I can appreciate the musicianship and attention to detail but it was not really very warm or emotionally connective on a human level. Then again, maybe I just missed the bus. Or expected too much.

I will say that they are very smart dudes as well as fabulous players and their stage banter was pretty engaging. I had a really good time. Would see them again. Perhaps a bit more altered. Maybe then it will all make more sense?

Leslie was up front. She loved it. When we found each other at the end she asked me if I enjoyed the fantastic Beatle's encore, Tomorrow Never Knows? I couldn't even admit to her that I was sitting in the lobby in a big fat comfortable chair talking to a guy about Arthur Lee and Bill Withers and completely missed it. My bad.
Posted by Blue Heron at 2:34 PM