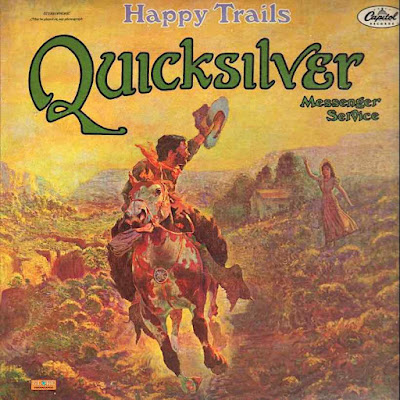 I heard that Gary Duncan had passed yesterday. Duncan was the guitar player for the wonderful Quicksilver Messenger Service. Quicksilver was a great band that could really get after it.

I didn't get to see them until long past their prime, at the Schaefer Music Festival in Central Park in 1972. Dino Valente had sort of taken over, John Cippolina had left the band at that point.

Duncan, born Gary Grubb, was a Native American who earlier played in a garage/psych band from Merced called the Brogues, along with fellow Quicksilverian drummer Greg Elmore.

Gary and John had a unique twin lead sound that was jangly and metallic and totally ripped. Almost like the hissing of a snake, very powerful.

The last time I saw him he was sitting in with the Grateful Dead on a song or two 10/31/91. You can watch a video here but the sound is better here. If you hate the Grateful Dead and many do, don't listen and don't torture yourself. This was a several night stand, the first night had Duncan playing leads on an excellent Iko iko > Mona jam with Jerry and Carlos.

The reason I point you to the first video is that there is a wonderful section with Ken Kesey that bears listening to at about 42:30. Kesey's son had died in an accident the previous year and Bill Graham had died six days earlier. Pretty poignant stuff and one of my favorite quotes of all time.

Here's a nice, clean Gary Duncan composition with Dino Valente on vocals. The fabulous Nicky Hopkins on piano. So who's left? I think just Freiberg and Naftalin.

Quicksilver best expressed the Summer of Love. Gary Duncan was a really good guitar player and a decent vocalist. But it was Cippolina, an incredible guitar player, who put his signature on the music. His sound system with the metal horns thru his amp best caught the S.F. sound. Along with Garcia and Jorma he developed the psychedelic Haight Ashbury sound that changed music forever.
Duncan and Quicksilver did their best work when lead singer and the bands founder Dino Valente was doing jail time. When Valente returned he replaced Duncan's duty as the lead singer. Valente's screechy voice and obnoxious personality ruined that band.

I saw John many, many times. He definitely had a wonderful and unique sound.