We've all heard the mantra from the right. Open it up, trust people, they will be safe and responsible. 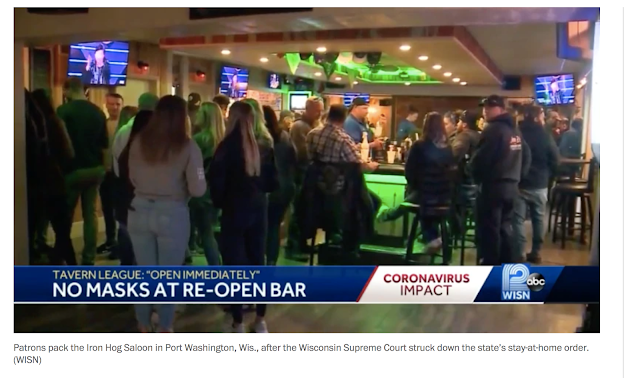 So they opened it up yesterday in Wisconsin, the GOP led Supreme Court overruling the Governor's stay at home edict. And guess what, I have seen four or five pictures from last night, they aren't social distancing, they aren't wearing masks, they aren't behaving responsibly. Packed together tighter than a Pabst twelve pack.


“We’re the Wild West,” Evers told MSNBC’s Ali Velshi on Wednesday night, reacting to the state Supreme Court’s ruling and the scenes of people partying in bars all across Wisconsin. “There are no restrictions at all across the state of Wisconsin. … So at this point in time … there is nothing that’s compelling people to do anything other than having chaos here.”

Many of us have wondered how bad it could be to thin the herd a little bit, let nature take care of the stupid ones. But that can not be done with exact precision. These idiots will infect people who don't have it coming, unfortunately. Texas opened it up a week ago. And have had five straight days spike of +1000 confirmed cases per day. Look for something similar to happen in Wisconsin if this type of behavior is any indication.

How many people of all ages have thought they were bulletproof with this thing and found out that they were sadly mistaken while exercising their glorious freedom and liberty? Could it be that we can't trust people to act responsibly?
Posted by Blue Heron at 10:35 AM

Green Bay, Wisconsin has a meat packing cluster of Covid cases. The local Tribal Council has issued a warning for their members not to visit Green Bay.
Expect the numbers to spike.