There is an enormous amount of legitimate fear in the entire world right now. No country has been hit worse by the pandemic than the United States, for a variety of reasons that we don't need to explore right now. The toll in both human lives lost and major organ damage to the survivors is horrific. And so is the fear by many that whatever the physical costs and mortality numbers, can it be any worse than seeing your loved ones die of starvation due to the economic misery and does it compare to the psychological devastation of losing your business?

I don't have any answers, I am as dumbfounded as the next person. But I have plenty of questions, and I think the entire world is asking similar questions.

I received this email yesterday from my country Supervisor Jim Desmond, who has been beating the drum very loudly to open things up.


Earlier today, I wrote an op-ed in response to Governor Newsom's announcement to open some businesses. This is a small, but good step. But much more needs to be done.
In the past seven weeks, 4.1 million Californians have filed for unemployment benefits. In San Diego County, businesses are closing and our unemployment rate is now 26%. And that number does not include the many self-employed, facing dramatically declining income, who have not yet filed. An unemployment rate of 26% is a staggering number. The last time our nation has seen such a number was during the Great Depression of the 1930’s.
I’m calling for all restaurants to open, safely on May 21 and other businesses who are willing to follow the safety protocols to do the same. The citizens of San Diego are hardworking, taxpaying residents, who must be treated like adults.
Let’s move forward and get our County open. 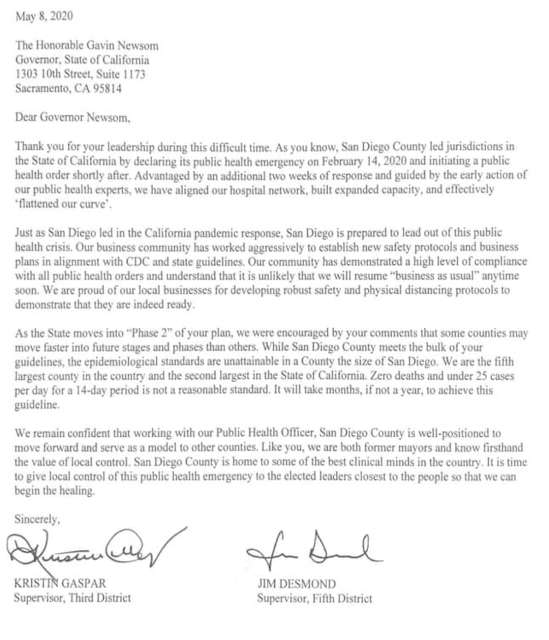 The Supervisor, who seems to be a good man, in his usual fashion only looks at the business side of things in his cost benefit analysis, never the health side or at least he doesn't allude to it in his daily missives. Ever. I wrote him the following letter but do not expect an answer for two reasons, one, frankly because I never get a personal response from him and two, because how can anyone honestly answer my question? How many deaths are reasonable?

Great letter, supervisors, but I still wondered about something. You state in your letter to the Governor that "zero deaths and under 25 cases per day is not a reasonable standard for a 14 day period." I have an honest question? How many deaths do sound like a reasonable number to you? Give or take...

Is it ten, a hundred, thousand? How many deaths are necessary, especially deaths that may have been avoided by a longer quarantine period? It is a very tough call. But one would hope that their elected representatives or their experts would have an answer or metric of some kind and be willing to publicly state it and share it with their constituency. Just go on record. How many would be too much?

Fallbrook, by the way, is no longer number one in lowest covid 19 cases per 100,000 residences. We have four five new cases this week and are now ranked third, behind Alpine and Ocean Beach. Things are not necessarily getting better but we are perhaps getting better at pretending that they are. But there is a huge push to open it up and let the chips fall where they may. Is this rational?

Would love to get your thoughts...

Open up, be safe, stay home if nervous, and do good contact tracing on the hopefull few new cases.

Cars kill more people...do we ban cars? Flu does a pretty good job and we don't shut the country down every year for 6 months. Sugar, tobacco, no end to the things that kill.

The problem was no one saw it coming and freak out panic started. I don't know how many people a year tobacco kills, but probably in the million number. Those who are worried do not smoke and avoid 2nd hand smoke. All about choices.. Now we know this bandit, we can make our own choices.

With Awareness, we can all make our decisions until this is under control, either thru vaccine, better and more testing and better medical care for those sick.

tobacco is not a contagious disease , neither are car accidents. sure there is second hand smoke, but that is a different beast altogether. this is different. But I appreciate your comment.

No, car accidents aren't contagious. But they are a son of a bitch to those killed by others with cars. Who knows how many deaths are acceptable? I've long wondered that of the open border lobby; still no answer or accountability, for that matter.

Flatten the curve was the goal and we have. Waiting until everyone is vaccinated is not realistic. Stay home if you want it’s your choice. Allow for a gradual opening of the economy now seems correct. Let’s see what the consequences are, we know what happens if we don’t open up. We can’t wait until we know every possible outcome.

I repeat my original question; is there a number of deaths that is too many and that would cause you to reevaluate your goal? I am just trying to ascertain the number.

They would never give you a number, because politically in the US, every number is wrong. So a US politician would likely answer "Any preventable death is a tragedy and should be avoided. But not opening the county back up may also lead to deaths and suffering of our population. We must therefore make difficult decisions that are best for the fine citizens of this county!"

In Germany right now that number is 50/100,000. As the country begins to loosen restrictions, they will reassess death rates every 2 weeks for each county. Any county that has a rate of new Corona cases > 50/week, must reimpose restrictions until the number drops below 50. Given that Germany has a Corona mortality rate of 0.3%, you can calculate the number of deaths they are willing to accept.

I can already hear your outrage and your stereotypes about Germans being dragged out. But this is an honest way to deal with the issue. Not the only way, but a way.

What number do you find acceptable, Blue Heron (and don't you dare give us a politician's answer ;o)?

No german stereotypes today. What I was thinking is that I largely agree with you. The problem is that many of the politicians are looking at the economic condition in a vacuum and seem mostly oblivious to the people that are actually sick and dying. They don't like the 14 day zero death metric but they refuse to offer a hard metric alternative.

Now I am supposed to say something about the trains running on time, right? Ich bin eine Fallbrucher...

Other pandemics started in this country. I don't remember the rest of the world shutting its doors. The great majority of cases in this country, according to Governor Cuomo, originated in Europe. The blame is with a microbe, not a people. I think it is funny to hear people like Patience Roggensack, Azar and Pat Roberts blame minorities for the problems in the meatpacking plants. They say that they brought it from home. Hundreds of other places where minorities work are free from the contagion but the hispanics and refugees are now responsible for having infected the meat packing plants. Not the regular people.

Not rational but "logical!

Luckily for the rest of you, I am not setting policy here. I am neither an epidemiologist or a virologist, as you know. But after what I have read about the second wave in 1918, I know I would prefer to listen to doctors rather than mayors or supervisors. The former seem to think humans are less expendable. I could take a stab at an equation that is slightly more forgiving, say three deaths and fifty confirmed cases in a ten day period, but it would be merely throwing an uninformed dart at the wall.