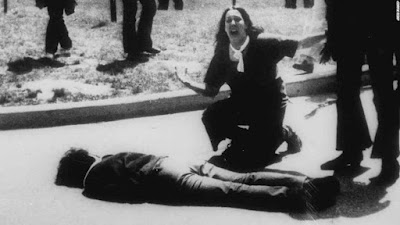 Several people have written to me about the anniversary of Kent State.

Although I was very young at the time, I remember it vividly, an American tragedy. Growing up in an activist family, I had been to the Moratorium March in Washington D.C. the year before with my mother.

None of the four people killed at Kent State had it coming, but the fire from the National Guard was indiscriminate.

There is an excellent article on the subject in the latest New Yorker, Kent State and the War That Never Ended by Jill Lepore. Author James Michener does not fare too well in the article, shown to be a rank apologist for Rhodes and Nixon. Lepore weaves in similar tragedies at both Jackson State and Berkeley, America only too ready to take aim at its own citizens.

My friend, the writer and photographer Wilbur Norman has written a short piece on Kent State at his blog, Norman's Gazette.

My friend Steve is also an Ohioan, he sent me this note:


Where were you ??? 50 years...good Lord. Roommate & I were working with Toledo schools...took a group of kids "camping in the wilds". No tv, radio, phone. Didn't know what happened until we returned on Friday after the "event". It got crazy, but I wonder if we've gotten anywhere since. Seems like we just tread water, go from one calamity to another, each of a different nature. Somehow, I thought life would be different...

Had a friend who came out publicly after 25 or 30 years as an SDS organizer at Kent State who had been living under an assumed name all those years. Kind and thoughtful person. None of us had any clue.

Yeah...I remember seeing it unfold in real time on NBC after school. One of the indelible images in my life that had a profound effect in shaping my political views to this day. I'm still shocked.

Thanks for the 'plug' Robert. Events like Kent State stay with those of us who were young and impressionable (and not too far away with friends in school there). Plus, you learn early on that the State and Commissions of Enquiry will almost always side with the powerful. And when they do not, few of the powerful suffer any consequences, anyway.