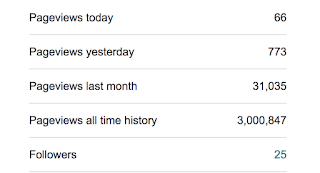 I don't know what the actual metric is. Google said that the blog hit three million page views yesterday. But I had messages from Google that I had over seven million views five years ago. How does that square up? 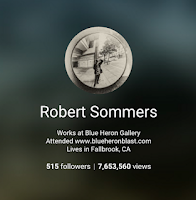 Must have been demoted in some great Google purge. Quite possible actually. And I took that six month sabbatical in 2013, remember?

Of course it is immaterial after a certain point. A hell of a lot of people have tuned in over the years.

And the traffic was even bigger in the middle period, my blue period if you will. A couple thousand more people a day. The only problem was that I had written so much, on so many subjects and so saturated the web that I would look something up and find myself being cited.

Which is kind of creepy because what the hell do I know, after all I'm no expert, just another information processing chimp with a keyboard? But I was showing up at the top of too many web searches, too many for either my or Google's liking.

So they dialed me down a notch with the new algorithm and I am actually grateful. Took off some pressure to produce and I no longer had to respond to people as much. The amount of hateful trolls has stayed pretty constant throughout but I now instantly delete so as not to feed them or give them any oxygen in hopes they will find more friendly pastures and obsessions.

Somebody asked me if I was on Instagram. Well, I was or am but I didn't and don't feed it. I don't like the aspect ratio or the compression. I tried to stick something up recently and the Lightroom desktop plug in no longer works. So I would have to send the damn photo to my phone and it sounds more trouble than it is worth.

I still stay in the slow lane with my blog and plod along.

I did recently rejoin Twitter because there is too much good political stuff I couldn't see, having cut the cord a couple years ago. If you tweet please follow me at @Robertblueheron

The Blue Heron Gallery actually has a Facebook page too that I should probably utilize. If you want to follow me I will try to look at it more often. I check it on a yearly basis at this point.

Thanks for the three million!
Posted by Blue Heron at 5:55 PM