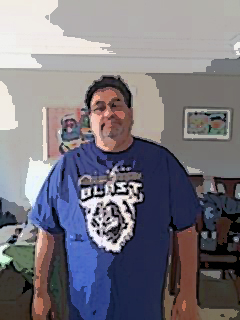 I have been thinking a lot of my late brother Buzz the last few weeks, wishing I could talk to him. We steadied each other, we both were each other's closest confidantes.

Last night I dreamed he was still alive. Although he lived in Toronto, I was flying up to meet him in a wild area of British Columbia.

But the planes kept getting rerouted, and I kept missing connections and then found myself on a couple trains going nowhere and I missed my stop and then suddenly I showed up in Canada and there were a bunch of bears hanging around and he never made it, he was dead and then I was sleeping on the floor of an airport trying to find his luggage and trying to find my own way home. And I think I may have been in Philly or Brooklyn at this point.

And some asshole said something nasty about my brother in the airport and I remember bashing his head against a wall until he was senseless and I in turn figured out that it wasn't going to help the situation any or bring Buzz back and I stopped.

And then they found my luggage but it was unzipped and when I grabbed it a gun fell out on the floor but I managed to stuff it back in the bag. Last thing I remember I had two more hours before an all night trip back to San Diego.

And then I woke up. Odd dream. 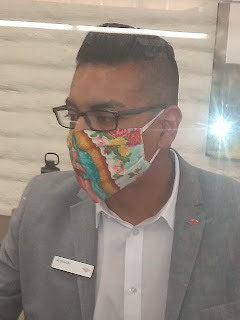 There have been some wonderful masks out there. One of the  managers at my bank was wearing an absolutely lovely mask depicting Our lady of Guadalupe. Very beautiful. 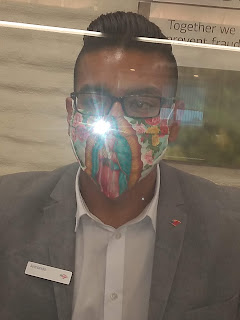 Crummy picture taken with my old phone but hopefully you get the point. Probably my favorite mask so far.

*
MAGA yokels like to bandy around terms like "herd immunity." Experts estimate that we would have approximately fifteen times the current casualties if we went that route. This epidemiologist calls it a "brutal arithmetic."


"Right now, unless you're New York City, chances are that 5 percent or less of the population is immune, so to get to herd immunity, you'd have to take the number of cases and deaths we've already experienced and multiply that by about 15," Dowdy said. "If we were to let that happen over a short period of time, it would obviously be catastrophic for the health system."

For COVID-19, the disease caused by the coronavirus, it's estimated that 50 percent to 70 percent of the population will need to be immune to achieve herd immunity.Despite more than 4.3 million confirmed coronavirus cases worldwide, no country is even approaching the levels of immunity needed to collectively slow transmissions.In Wuhan, China, thousands of people returning to work in April were tested for antibodies, and preliminary results found that only 2 percent to 3 percent had developed them. Early results from a nationwide study in Spain found that about 5 percent of the roughly 90,000 people tested were positive for antibodies. And even in hard-hit regions, such as New York City, preliminary testing of 1,300 people found that 21.2 percent were positive for antibodies.

Once again we see that the thundering covid denying herd has no idea what they are talking about and should not be heard. Unless of course you don't give a damn about historic numbers of casualties. But it does bring up a line from a 1925 book by Kurt Tucholsky, often misattributed to Stalin; The death of one man, that is a tragedy. One hundred thousand deaths, that is a statistic!

In the same vein, you know the emails you get from people that tell you that it is little worse then the flu? From National Review: COVID-19 has already killed more people in two months than died from influenza and pneumonia in all of 2017, when those illnesses were the eighth-leading cause of death.
Posted by Blue Heron at 8:06 AM

Hard to decide which devil it the worst with the coronavirus. If I was going to design a bad collective response to this threat I would go for dividing the country and fighting over what to do. Idiots see this as the disease versus the economy. It isn't a tug o war. Both the economy and the disease need to be addressed for the US to succeed at this. If there ever was a better illustration of "united we stand, divided we fall" it is hard to find. So far our fighting with each other just makes the US look pitiful to the world and makes the situation worse.


Opening up will eventually result in a steep spike in new cases. Guaranteed.

And this herd immunity thing is wishful thinking.

People in Wuhan who recovered from COVID 19 were re-infected after testing negative.

Same with sailors on the USS Theodore Roosevelt.