The orange one and the new black 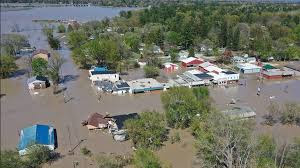 I assume that most of you have heard about the Edenville dam breach and disaster in Michigan. The epic failure and environmental disaster came after repeated warnings and the scene happens to be located directly above a toxic Superfund site and the headquarters of Dow Chemical.


The dam, owned by Boyce Hydro Power since 2007, used to produce a small amount of electricity until a dispute with the Federal Energy Regulatory Commission culminated with the agency revoking the company’s license to use the dam for electrical generation in 2018. The agency said that Boyce Hydro had refused for 13 years to build a spillway that could divert floodwaters away from the dam, which it said was in danger of failing in a heavy storm. The agency said Boyce Hydro had an “extensive record of noncompliance.”

Salon has an excellent article today about the problem and what happens when for profit companies control infrastructure. Usually they go belly up when things go bad and the problems end up getting remediated by the American taxpayer, who also pick up the tab. Coal bankruptcy in Appalachia, uranium tailings in Utah, it happens again and again.

But the article points out the incredible choices we make in this country, over a billion dollars spent on a mere forty two miles of border wall that got repeatedly breached the first day of its existence and another million dollars plus a mile spent because the big orange turd decides he now wants to paint it black. The Mordor edition. Talk about an empty gesture by the decorator in chief. Form and image over function, again and again. And we get the bill.
Posted by Blue Heron at 11:27 AM