The Senate struck much of the passed paid sick leave language from the Coronavirus bill, forcing employers to pony up for two weeks sick leave for workers. I believe that the bill limits the requirement to employers with under 500 workers, which I completely don't understand. Why pick on the little guy?

I am personally glad pissed that this happened. As a small businessman, I know that I would never be able to afford paid leave for workers, neither would my wife. Small businesses are struggling to survive and keep their doors open. How do you lay the burden of paid leave on top of them too?

Do something like that and watch all the doors close and all the people laid off or made into temporary workers. Where is this money for paid leave supposed to come from? 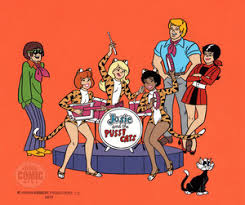 On another front, I was talking to two musician friends in the last two days who have told me that California State bill A.B. 5 has basically put them out of business.


Existing law, as established in the case of Dynamex Operations West, Inc. v. Superior Court of Los Angeles (2018) 4 Cal.5th 903 (Dynamex), creates a presumption that a worker who performs services for a hirer is an employee for purposes of claims for wages and benefits arising under wage orders issued by the Industrial Welfare Commission. Existing law requires a 3-part test, commonly known as the “ABC” test, to establish that a worker is an independent contractor for those purposes.

This bill, passed last September, is having huge reverberations in many industries, but it is killing small performing arts groups like musicians, recording studios, theater productions and dance companies. It was ostensibly created to crack down on independent contractors and operations like Lyft and Uber for its union backers but in a music scenario, you now can't ask some one to come in on a session and play a flugelhorn solo on a track without giving the person full employment status and paying payroll taxes.

Musicians are already barely making it, this will kill them. And it has. Thanks Assemblywoman Lorena Gonzales, a representative with a clear nasty streak, you really mucked this one up. You're a real sour note. 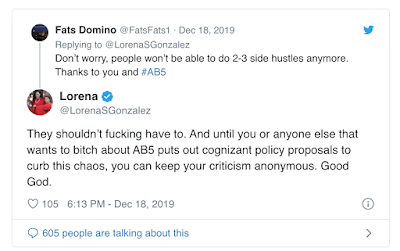 Another do gooder out to save the world but completely clueless about the ultimate repercussions of her misguided actions.