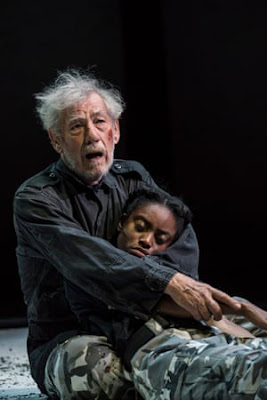 I got the first call around noon yesterday A friend who is in a similar but slightly different line of trade, with some points of tangency. "Do we still have a business?" he asked. I'm like, How can you ask me that question, how the hell do I know?  Got another similar call this morning. "What the heck are we going to do? How do we not go broke?"

I don't know. Cry, wail, bleat, scream, knock our heads against the wall might work for starters. You tell me, what are we going to do?"

Client called today, had consigned two paintings to me. I offered to buy them last month, we differed on a fair price, now he wants to take the deal but the old offer is of course, now off the table. Because pretty much everybody I know is burning through their savings and what the farmers called their seed corn at an incredible pace. Me included.

I have an outstanding bill swirling around me that could literally cause me to hurl and lose my lunch in a heartbeat if I gave it more than a second's thought. who is still conducting business today? Who in the hell is not worried financially right now? Some one with damn sure more money and faith than I have, I tell you. What's a poor working stiff to do?

So you know what? I'm not thinking about it, especially on a weekend and especially only two weeks or so into our corona virus, shelter in place and lockdown. There is a time in our lives when you have to sit back and let it all unfold and just surrender. There is not a damn thing we can do about our financial circumstances at the moment and there is no point getting sick over it. Let us give it another week, then get sick over it.

At last count there were approximately 327 million human beings in the United States and they are pretty much all going through the same crap. And with an epidemic that is forecast to take upwards of 200k innocent souls and is not supposed to reach any kind of apex until late April, at least in California, the fireworks may just be starting.

So banish the word security from your vocabulary, it is so 2019. Unless you are one of those rare souls I read about in the paper this morning rich enough to rent out hermetically sealed castles with robot waiters in Ireland or Switzerland, the perfect storm has hit and you better be thinking defensively instead. How about refitting your Mad Max thunder cruiser and polishing the Ben Hur vehicle spikes? Buy war paint.

Hide a few eggs, baking power and tranquilizers, if you are lucky enough to find them, in your safe (currency and precious metals having gone into the toilet.) Sharpen some sticks. Be prepared to defend your home, transportable yurt or the park bench you are now claiming as home by force, prescriptive right and eminent domain if necessary.

This whole descent into thunder dome armageddon has really shown the strength of federalism in this country. A President not willing to give medical equipment to certain governors until they kiss his ass, saying it's not even his job to help the states. Who encourages states to bid against each other. Who tells manufacturers not to sell to certain states. Who bids against those same states for needed equipment and says that the Federal government is not a shipping clerk.  Obviously he's not. He delivered 170 broken ventilators to California yesterday, a big Trumpian fuck you. And Didouche D'Souza asking why the President should help the mean old blue states at all?

Rhode Island doing door to door searches looking for New Yorkers, Florida sealing off both the New Yorkers and the Louisianans. Hawaii shutting its doors. I don't blame the states for having no faith in Washington right now, this is a state's rights wet dream, with a President who says he won't help anyone who isn't nice to him. What use is it to even have a federal government?

It is clearly every man for himself, every state for itself and any national apparatus that we may have thought we had to guard against such a calamitous event was either grossly incompetent or clearly outgunned. Or more probably disabled by a bean counting toadie in some cost cutting move.

Did you ever think it could become this fractured and savage? Or have we been deluded, has our national comfort and security been a ruse this entire time? The feeling that the Federal government we pay taxes to would have more responsibility than this one evidently thinks it does when the shit hits the fan. Because it all feels like it is hanging from a very fine thread right now.

So what do we do? Fiddle? Toast marshmallows? I guess we wait, prepare as best we can, keep an adequate social distance and deal with the after effects when the storm has passed. No point worrying now. Have to let it ride.
Posted by Blue Heron at 2:38 PM

I’ve told those closest to me, time in again, if the end of the world comes in my lifetime, I hope it’s during the super-bloom…

I agree with your last comment to deal with circumstances as they hit. We'll pick up the pieces if we survive. Remember Dr. Strangelove? Of course you do. The subtitle was, Or How I learned to Stop Worrying and Love the Bomb. That's my strategy. Deal with whatever comes. You can't resist it. The worst is that the virus kills me. Short of that, they can (as my grandmother would've said) call me pisher.

We shouldn’t have to kiss his ass! Nothing belongs to him. The measly checks they are sending is “our” money... discussing...

Your writing has been better than ever lately. Either that or I’ve been home too long.

I'm finding your voice so comforting these days! I think you're right, no use worrying or trying to plan anything, we are in the grip of forces no one can predict or control. It's just as likely that we all go broke as it is that the next administration calls all debts off. We are surfing the big one, and we don't know where it will end. Time to try some new things when this is over, the ultimate moment to reshuffle the deck. We'll find out precisely what America is made of in a year. It will take guts, and we'd better come up with them.
~ Diane O

It was terrifying!! Upwards of 20,000 poor souls iced! [Yawn] That's right, 20K
bought the farm and they dint even lay them out in Javits! Why, because it's old news!
Disease kills people! Holy shit, never woulda thunk it.

Then I looked at the stats for how many die daily for any number of reasons...yea about the same! You starting to get it? Hysteria is the rule of the day. WE MIGHT DIE!!! Oh My Freakin' God!! There are 18 million people in the Big Apple. Yep that's right. 20K kick it and the world still parties down in 2018-2019.

But stick Corona something on it and you gotta stay 6 feet apart?? And you can't have a job? You can't run your business? Can't leave the house? There's gonna be riots and
the wise are going to REVOLT