In this time of mortal crisis people have to be careful not to prematurely forecast their imminent demise. It can get quite embarrassing when the end doesn't go exactly according to plan.

Leslie has a friend on Facebook right now who is facing a bit of a quandary, having initially cried wolf on the Covid thing and now too sheepish to fess up and admit that the test results came in and that she is currently copacetic. Curtain calls are always difficult.

I should know. I have written my own eulogy dozens of times. But life has this way of rising up and thwarting the best laid of exits. So we have to be smart and sparing about such things. People quickly tire of the drama. So die already.

I have been largely in isolation this last week with a couple of minor pops into town for provisions. Had a good friend get too close and I freaked out yesterday, actually got myself sick with imagined worry. Everybody, friend or enemy, is under scrutiny these days as a potential host and carrier.

I went down to the medical center this morning for a cancer immunotherapy treatment. Gloves, masks, wipes and purel ready. Don't touch anything! Place was devoid of people, many lights were off, waiting room was empty. I got whisked into a room and a nurse I had never seen before asked me to take a urine test.

She came back a few minutes later and asked me if I was feeling okay? Fever, tired, pee smelling funny? Cough? I asked her what was up and she gave me "the look" and said that we had had a dip, whatever that means. "Wait here, I am going to get the doctor."

Now I am starting to plotz a little bit. A dip? The doctor came in and explained that I had an infection of some sort. It will take approximately five days to culture to understand its true nature, she prescribed some antibiotics. I'm guessing probably no big deal. But no chemo or immunotherapy for me this week, whatever I was brewing inside would kill any potential benefit.

Now I have had uti's before and hope that this is maybe your standard garden variety urinary infection. Which I hope that it is, not having a ready date scheduled for a personal swansong.

Because there is a lot of nasty shit lurking around this world these days, as I am sure you have heard, and as I have said before, I seem to have a target on my back for such things. So shoot me, I'm either oversensitive or paranoid. But even a stopped clock is right twice a day.

In any case, I am going to take my medicine and continue to lie low. Wait for further instruction. Try not to let my mind wander too much. Because it doesn't take much for this fertile imagination to start wondering what is up? 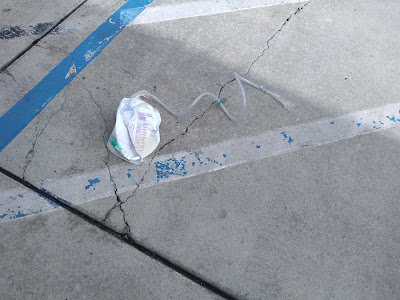 I drove over to Bread & Cie afterwards so that they could make good on the seeded corn rye they accidentally shorted me two weeks ago. And noticed that there was a half empty (half full?) catheter laying in the doorway.

I informed them when I walked inside that some awful miscreant had dumped his piss bag outside the door. Hardly sanitary.

Barely ruffled a feather, I don't think they pay them enough to jump up and deal with the detritus that must be present down there off Washington in Hillcrest on a daily basis. It was still laying there when I left. Now we Fallbrookians tend to frown on leaving our biological hazards around in front of our shops but we are admittedly a strange bunch.

Afterwards I drove to Del Mar and birded the area near the Pubic Works building, the San Dieguito River and the San Elijo Lagoon. Nothing special but nice to be out in the cool ocean air with the birds. Will see if I captured or caught anything notable tomorrow. And in about five days.
Posted by Blue Heron at 4:10 PM

Robert, stay well. We miss your stage presence... and the show will go on.