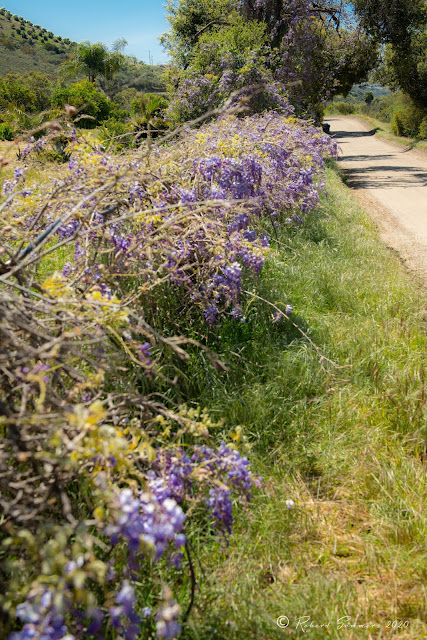 As I said, it has been so beautiful here. Today is a little overcast. Here is a picture of my home and our wisteria fence yesterday.

The flowers now run the  entire length of my property.

Making this one of my favorite times of the year. 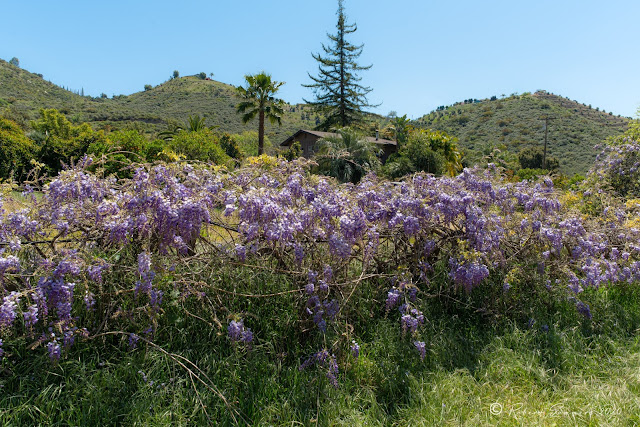 I also got a picture of the first bloom of the blue hibiscus that I planted a few months ago. 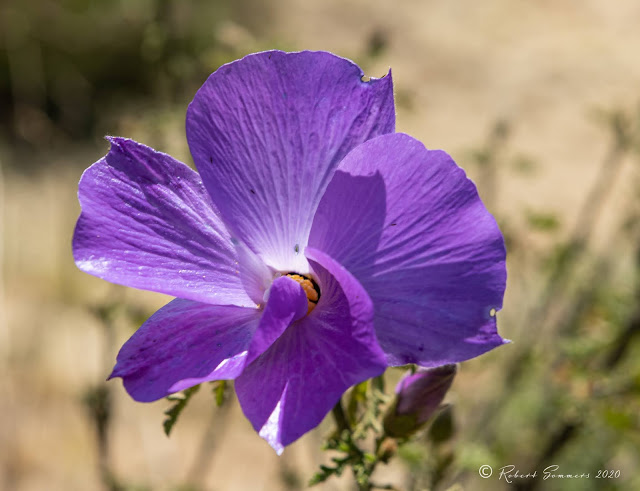 The blue hibiscus (alyogyne huegelii) is not really a hibiscus and it is also not really blue. More of a violet purple. It is in the mallow family, native to south and western Australia, first named by Austrian botanist Stephan Endlicher. This wan in honor of its western discoverer, Charles von Hügel, the Baron von Huegel (1795-1870) an Austrian army man who botanized Western Australia, Tasmania and New South Wales from 1833 to 1834. He returned to Vienna with a collection of plants that were later given botanical names and descriptions by Endlicher.

There are very few truly blue flowers in nature. Less than 10 percent of the 280,000 species of flowering plants produce blue flowers, blue pigments are quite rare in nature. Blues are the product of a pigment called anthocyanin.

Plants have evolved many classes of pigments: Chlorophylls color leaves green; carotenoids come in orange (carrots), red (tomatoes), and yellow (maize); and betalains produce the red color of beetroot. But only one class of pigments is capable of producing blue: the anthocyanins. (The word literally means "blue flower.") And even most anthocyanins are not blue but red, because they naturally absorb blue light; only if the plant tacks on chemical groups can the molecule shift toward absorbing red.

No blue roses, carnations or tulips. And flowers have to go through heavy gymnastics to even simulate or approximate a blue hue.

...Over the following decades, a different story emerged, one that was finally confirmed by x-ray crystallography in 2005. Cyanidin itself does not produce a stable blue color; instead, cornflowers combine six molecules of cyanidin with six molecules of a colorless copigment arranged around two metal ions—a huge molecular complex that stabilizes the cyanidin molecules and allows one electron to make the right energy transition. "Flowers are doing crazy chemistry to generate that blue," says Beverley Glover, a botanist at the University of Cambridge in the United Kingdom.
Several other blue flowers have hit on the same trick, but most produce a different anthocyanin, called delphinidin, that can more easily be coaxed to appear blue. The only difference between cyanidin and delphinidin is that the latter has an extra oxygen atom on one of its rings, put there by an enzyme called flavonoid 3',5'-hydroxylase. The entire family of roses, which includes apples and pears, lacks the enzyme, which means that delphinidin-producing roses can't be produced through traditional breeding.

Are you sorry you even asked?
Posted by Blue Heron at 12:52 PM

No, I am not sorry I asked. The beauty of reading you on-line is that you can scroll down the page if the topic is not holding your attention!