I can now cross two restaurants off the chicken sandwich list on my current fast food tour. 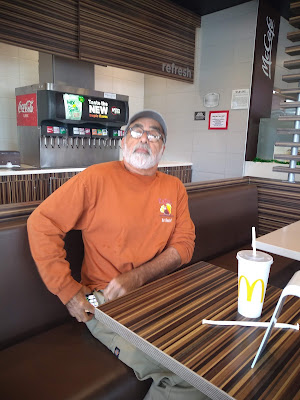 Tom came by yesterday to fix a leak in my wife's roof and I asked him to join me for lunch afterwards. Such a great guy.

Tom isn't a fast food fan but he is a trooper and he agreed to accompany me in the interest of science and the public good and to keep me company. 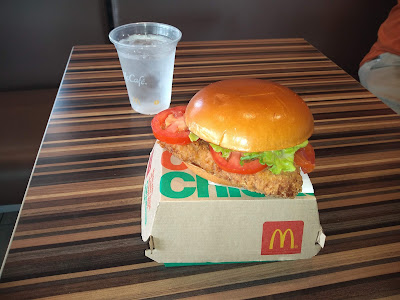 Our first stop was McDonalds, one of the favorites in the Thirster survey. I have only been in this "new" McDonalds once before.

Now, I'll give you, the chicken sandwich was pretty enough. I made the mistake of telling her I was doing a survey so I think they spruced it up a bit for the big time food critic.

But it was not at all to my liking. Although the chicken hung over the sides of the bun, which is good, the bun was squishy and nondescript and the mayo was overly sweet and cloying. So sweet it rendered the thing practically inedible. Taste of the chicken was meh.

I know that there are a few more chicken sandwich options at Mickey D's but I don't think even my iron clad stomach can take it.

We did have a notorious psycho homeless guy show up on his bicycle and camp out in the bathroom for the interim of the excursion. The tall guy who likes to cuss.

Tom thought he was done after our meal but I told him to buck up, there is only so much time to work and we were now headed to Carl's Jr. for round two, which also scored well on said survey. 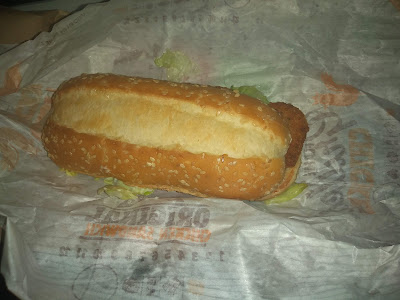 So two down, how many left to go? Not sure how long I can keep this up. Giving up is a real possibility but not before I find a Popeyes.

Juleen said that Denny's is pretty good, Renée suggested the Lazy H but now you are talking more regular restaurants and I think I am then busting up the initial perimeters of my survey.

Neither of these sandwiches were worth returning for. I march on...

If nothing else, you are a glutton for punishment!! Don't, by any means, do this for me!!

We tried Arbey's current offer of two for $6 (and allegedly bigger-than-the-competition) chicken sandwiches the other day and came to the 'meh' conclusion, but then we're not fast-food connoisseurs either, choosing to avoid it except on rare occasions.

I love Popeye s but I will not eat a chicken sandwich made with breast meat. The only time I eat breast is chicken parmesan