Whale of a time 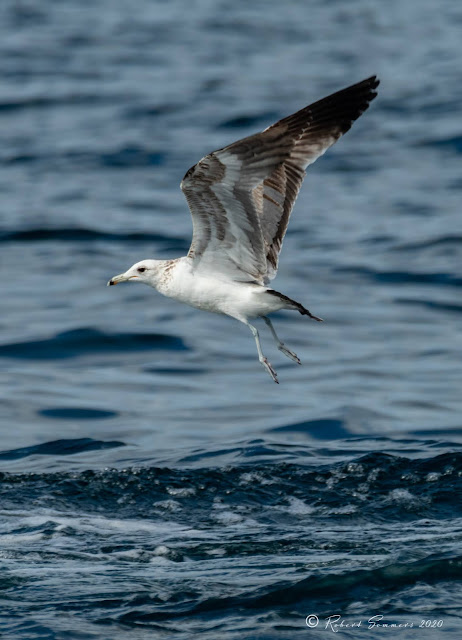 A very good friend was entertaining more friends from out of state yesterday and we all decided to go whale watching.

Leslie and I are always game to go out, we try to do it a couple times a year.

It is not terribly expensive, Oceanside Adventures has a great boat and a great crew and we have never been disappointed yet.

Not to say we haven't been skunked before, it happens. But it is still a great day out on the water, even when it happens. And the crew is usually more bummed than we are.

It looked like we could get rain at first yesterday but when we got to Oceanside there was actually warm sun coming through the cloud patches. It felt great after a week of overcast skies. 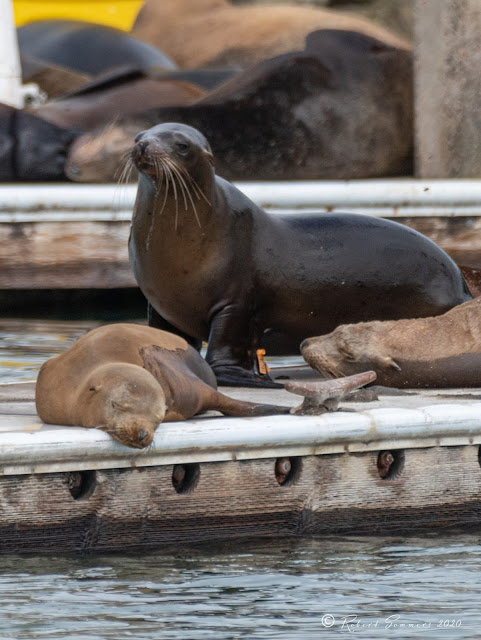 We passed the normal sea lion company and headed out past the jetty and into the water. 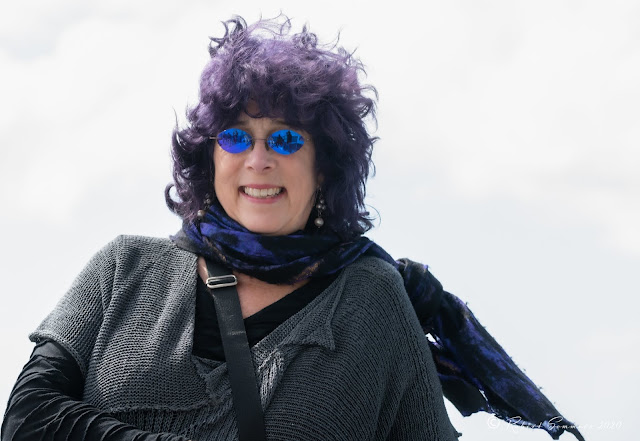 Leslie had a big smile on her face. She loves to be out on the water, coming from a sailing family. 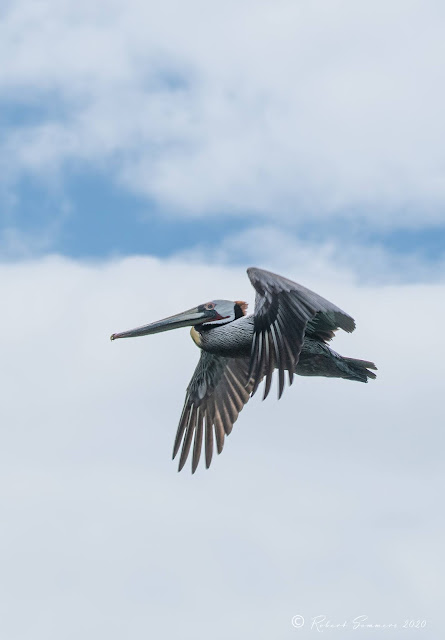 It was fun to be out and about in these difficult times, our freedom now being threatened by this dastardly plague.

I figured that it was probably reasonably safe to be at sea but I had the sad thought that some of my friends were probably now already hunkered down.

We'll go out on our feet, thank you. Anyway, Don brought wipes. 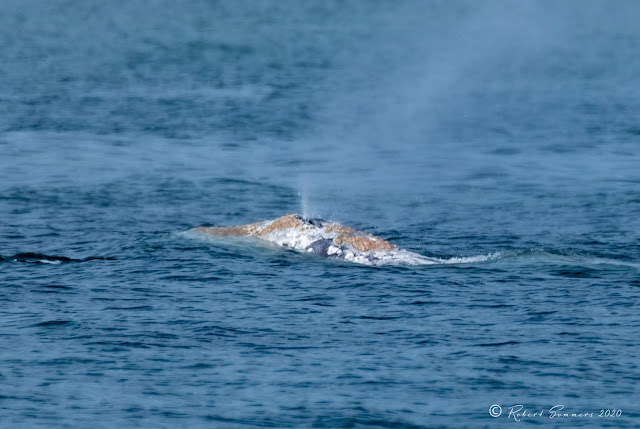 Yesterday was very cool, there was no waiting for whales, we ran into them in pretty shallow water, right off the coast, pretty much right away. 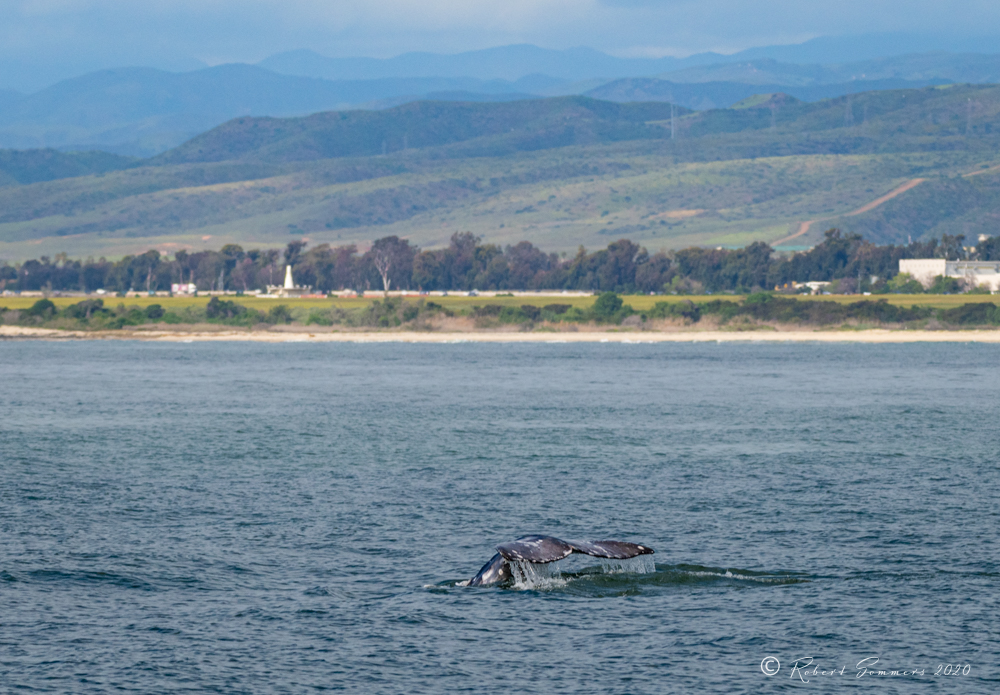 Our first pod were two gray whales moving north. They hung out leisurely and we spent a lot of time watching them surface and then dive back to the bottom in near minute increments. 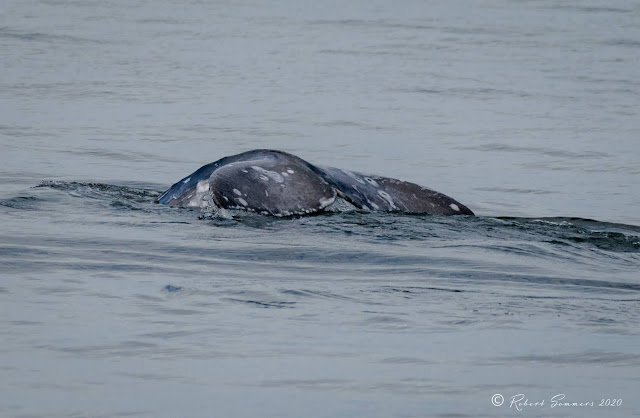 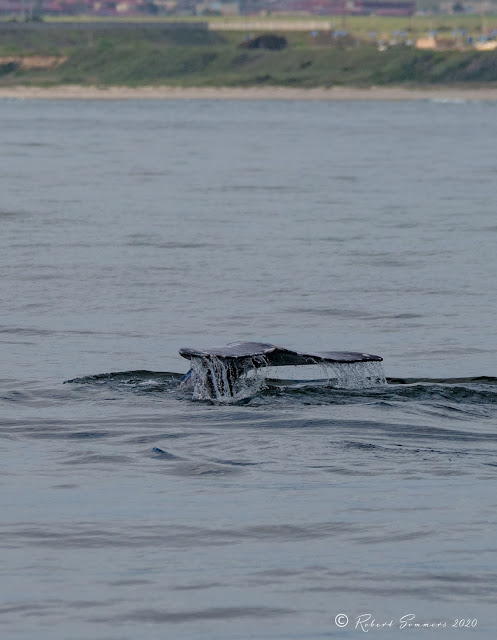 We didn't get any major breeches or tail shows. The reason is that we were only, as the captain explained, in about fifty feet of water.

The whales get perpendicular when they need to go deep. Their heads are buoyant and it helps them get to the bottom.

Due to our limited depth, we were treated to more shallow trajectories but they were lovely as well. 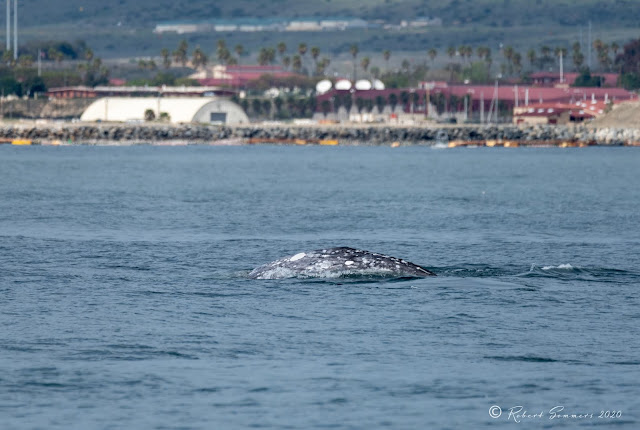 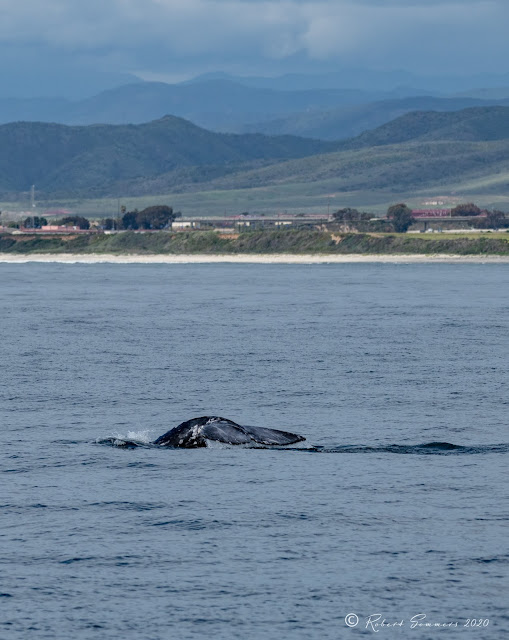 And there were lots of them. More than I have ever seen before but I won't bore you with a ton of fluke shots.

You almost had to be there. Very peaceful. 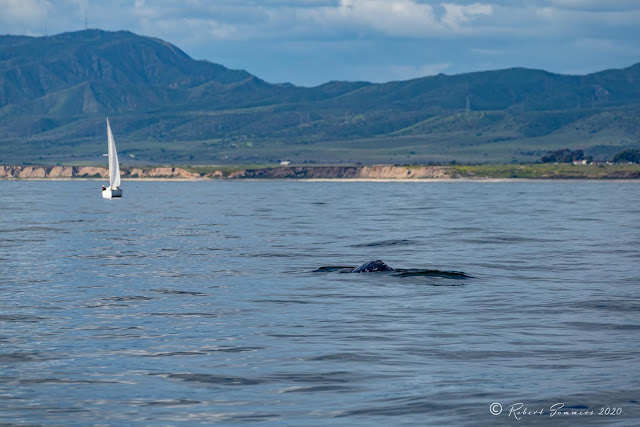 I am not the most competent marine photographer and once again I failed to bring the right equipment. My lens was slow and I had no polarizing filter. But I didn't and really don't care. It was too damn nice to be out on the water to care. 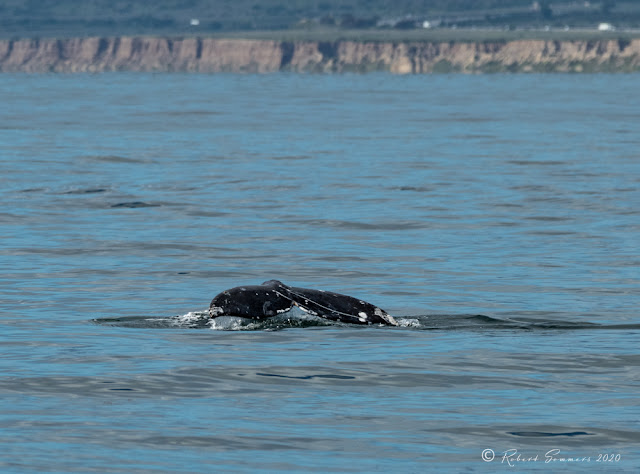 Such a blessing and treat to be able to hang with our cetacean comrades. 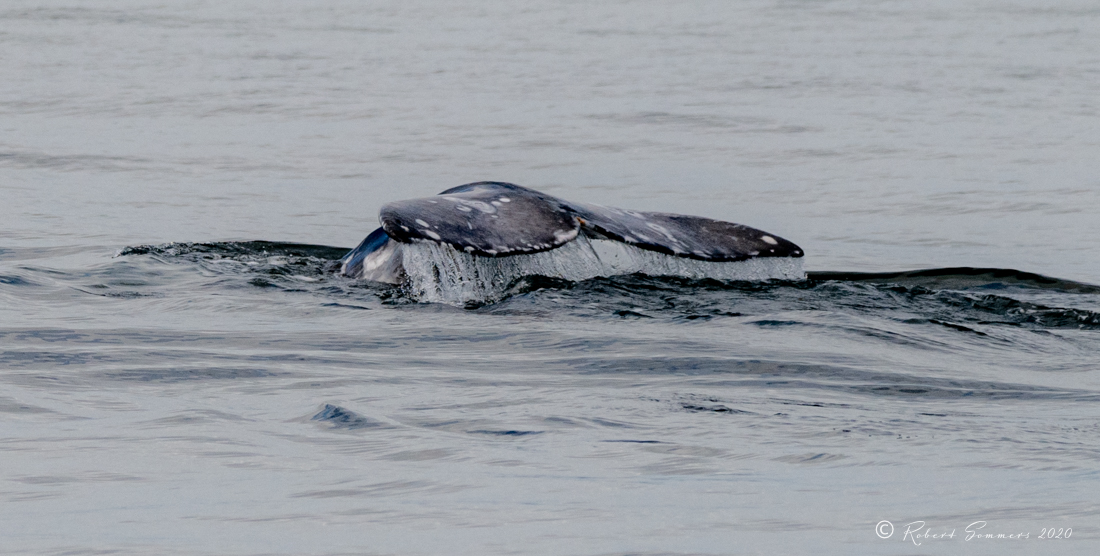 Unfortunately some irresponsible and clueless boaters decided to run right over the top of the whales at high speed. Our captain, in his wisdom, said that the whales were clearly getting stressed and that we were going to leave the scene and head for deeper water. Good for him. We had watched the whales for an hour and there are times we either see none at all or only at the end of our journey.

I am not sure how many we saw but I think there were both two whale pods and three whale pods around, all heading back up north in their migration cycle. Soon it will be only mothers and calves. 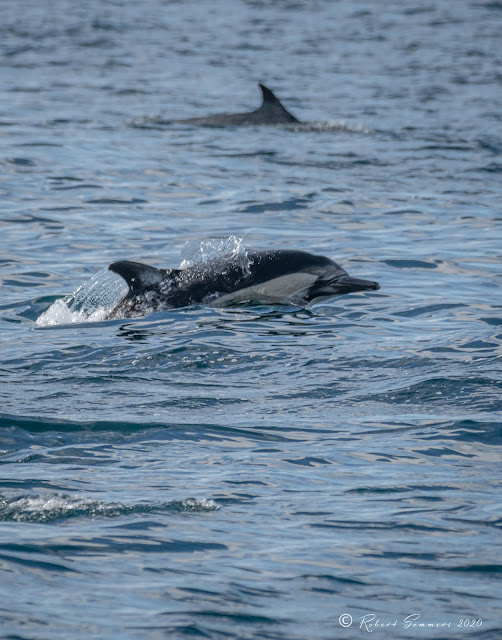 When we got deep we got into a large pod of common dolphins. I figure at least four or five hundred.

They were bubbling up all around the boat.

I wish that I had taken some decent shots of them but I really didn't. Missed another opportunity.

Next time maybe but no promises. Unless I bring the 400mm with the drop in polarizer.

That will mean that I am serious. Serious enough to lug an anvil around for two hours anyway. 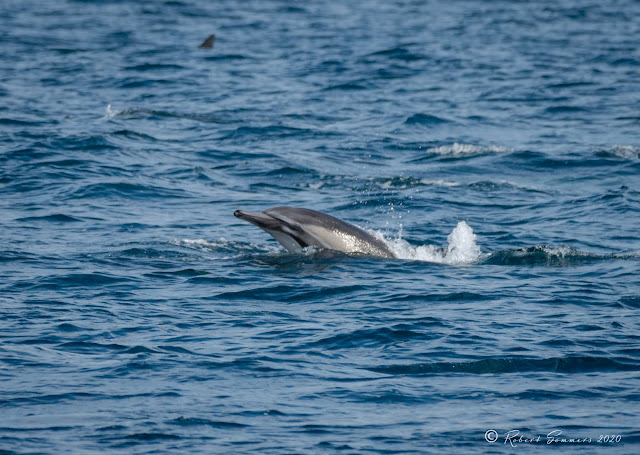 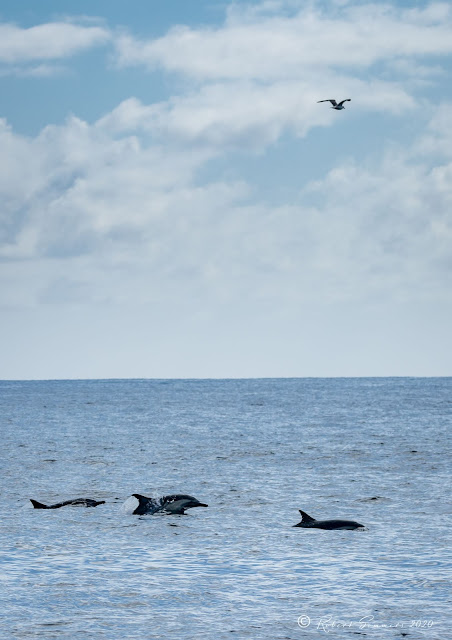 The world may be coming to an end but that doesn't mean that you can't enjoy yourself, after taking reasonable precautions of course.

We got off the boat and went to Harbor Fish for fish and chips.

A wonderful day in Southern California, apocalypse be damned.

It may suck on shore but it is still pretty happening out on the water. 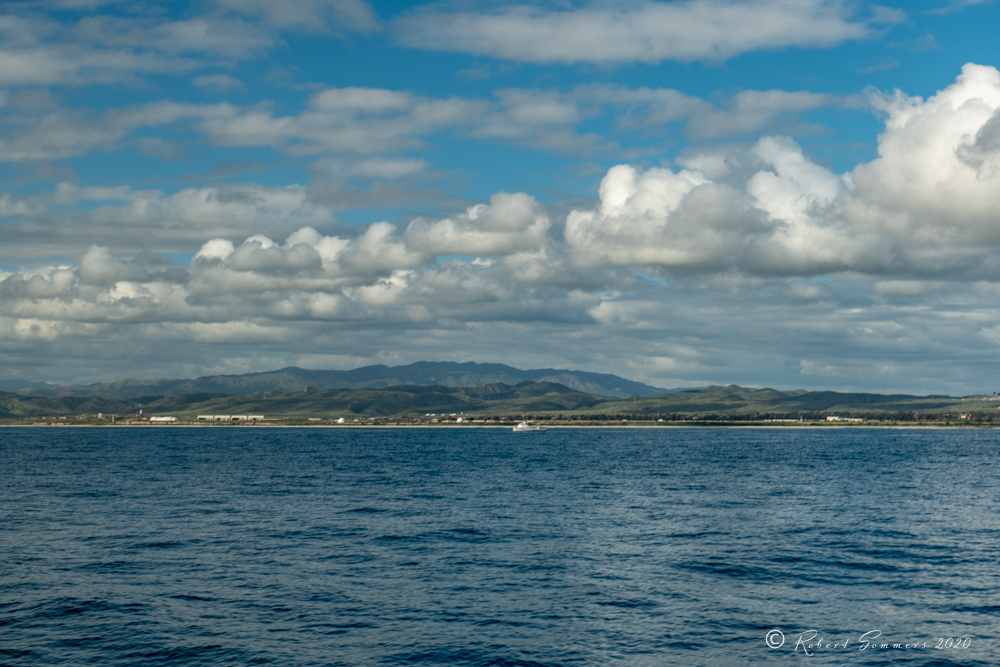 Thanks for taking us along... good shots