I hope everybody is holding out alright. It is hard to perceive how differently the current virus crisis is affecting others, some people are maintaining strict discipline and isolation, others are quite nonchalant at this point and think it is much ado about nothing.

I suppose time will be the final arbiter as to the appropriate reaction. 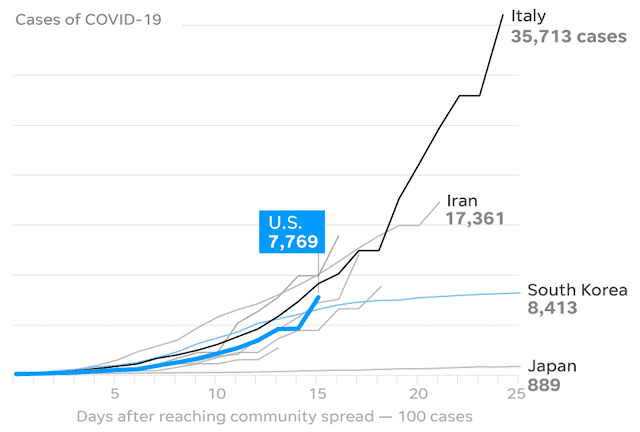 Experts say that we have reached a critical fifteen day point on the graph, our trajectory looks more Italy than Japan to my unlearned eye.

We shall see. Hopefully, things will now flatten out.

Unfortunately I fear that the naysayers will only start to take things seriously when they see mass casualties in the street and I think that at that point it will probably be too late.

Of course some are practicing a clinical detachment about our ability to muster through. Can't make omelets without breaking a few eggs, now.

Normally I find such objective sentiments quite laudable, why do they now sound so cruel and pathetic?

Dr. Sanjay Gupta had good advice yesterday; act as if you might be carrying the virus. I grabbed a coffee on my way into work, did I remember to grab the sanitizing gel out of my pocket and wipe my hands at the coffee shop after I touched the door? I did not. But I just did. We have to do our best against an invisible enemy but try not to get psycho neurotic and go crazy. 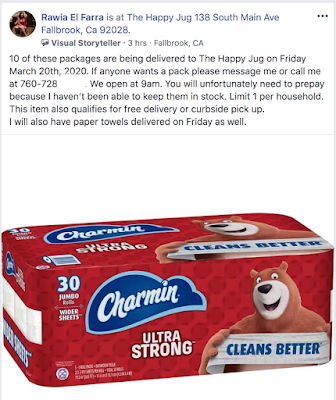 The liquor store down the street is now doling out thirty packs, one to a customer, first come first served, but online ordering recommended. Not sure what these babies are bringing but it can't be cheap.

Not going to meet my maker with a dirty bum. 😃 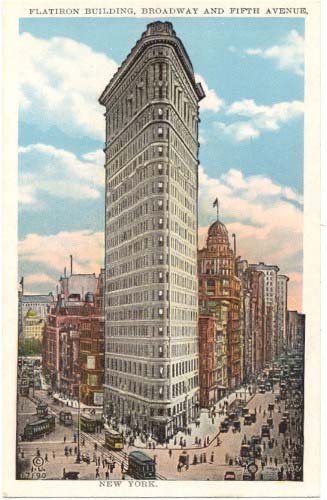 New York has always been my favorite city in the world. I loved living there, love visiting there, loved its tough citizenry and cultural treasures.

But even as a kid going to high school there, one thing stood out to me about Manhattan, the place I lived. It is clearly the most democratic city in the world.

No matter if you were living in a giant suite at the Dakota or a tenement flat in Alphabet City, rich or poor you were stuck in the same traffic jam and confronted by the same travails on the street. It's just the way it is.

I remember having the thought as a kid that Jackie Onassis had to step over the same bum in the street that I did, a poor kid from the lower East side.

It is impossible to hermetically seal off your life in such a city and that is what gives the people that live there their sense of realism and grit. Stress and compression are great equalizers. People quickly learn that they are all in this thing together.

I think that this virus thing, this "beer virus" as the Senator from Alaska calls it, might be the most democratizing enemy we have ever faced. No college deferments for your fake bone spurs against this thing, it doesn't really care. It is going to touch all of us, with no regard to class, race, creed, location or station in ways that are just unimaginable at this point. Let's hope that we are up to the task.

We are all in this together.
Posted by Blue Heron at 9:55 AM

But Jackie O. would stepped over the bum in her Louboutins, and the bum would
have looked up her skirt, not yours. Big difference.

The high road is not hard to find...when you're lying in the gutter.