There was an article in the Union Tribune today about all of the local hotels that are shutting down due to Covid -19. The beautiful Lodge at Torrey Pines is not one of them. I have no comment on that, either way, but I wanted to point your attention to the large painting in back and right of the bellman. 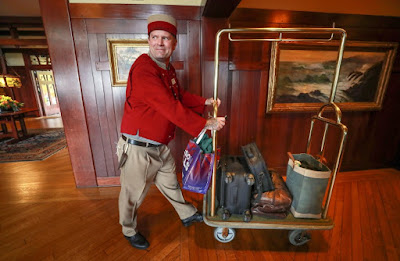 The painting is one of the earliest paintings of the San Diego coastline. It is titled Goldfish Point and was painted by the Oregon born painter Frank Lucien Heath (1857-1921.)

If I remember correctly, the large canvas was painted in 1883. How do I know? Because I sold the painting to the Lodge over twenty years ago.

I purchased it originally from the late "Kirk" Kirking, an antique dealer from La Jolla with a large following who later moved to Fallbrook. I in turn sold it to Bill Evans.

Heath was a student of Virgil Williams and Raymond Dabb Yelland at the San Francisco School of Design. Goldfish Point is an area located east of the La Jolla Cove. San Diego was a relative sleepy backwater until 1878 when the railroad finally came through and so this large and magnificent oil painting is a quite early rarity. And a rarity at the lodge as well, I believe the bulk of the artworks on the walls there are plein air style reproductions.

I never forget a painting.
Posted by Blue Heron at 7:48 PM

I will have to disagree with you on your last comment , it should say I never forget anything lol