We are all handling the situation differently since Clemenza sent us collectively to the mattress rooms. Some of us have it relatively easy, some are having it tough. Of course, this is all short term stuff, long term nobody knows what the hell will happen and I prefer not to think about it, or as little as possible, at least not for a week or two. 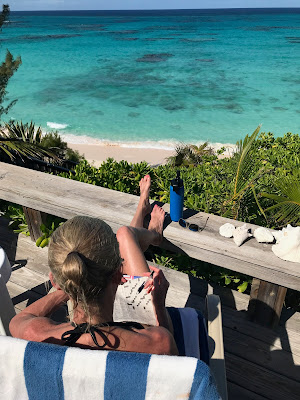 A couple of friends of mine have been quarantined for several weeks in the Caribbean, on an island whose name I will not disclose. They sent us a picture. Poor people. I feel for them. Another mai tai, Francois...

We don't have it so bad here in Fallbrook. Our larder is stocked, my navel orange tree is full of sweet fruit. Neighbors are watching out for each other.

I am particularly blessed. My wife is a superb cook. But I have found that we must be somewhat cagey with our private sources and supply line.

A friend, who I shall not name, bought out all the french butter we love from Major Market. The expensive stuff from Belgium with the hand raked salt from Normandy. Now tariffs have recently doubled the price of the stuff but hey, if it is truly the end of the world, we want to go down with good butter.

I finally bought my way through the Washington Post paywall too, as a news junkie teetering on the apocalypse I want it all. Stay informed during Ragnarok.

Anyway we got to the market yesterday, last week there were twenty four packages, yesterday they were all gone. Every one. There was plenty of cheap butter but they had to make a run on our stuff. Which we were too cheap to buy when we had the chance because of the ridiculous price increase. I immediately called a prime suspect and she fessed up to a certain number of purchases of said butter. Upon pressure she has agreed to sell us one of them at a suitable sum. Serves me right for blogging about the stuff.

Leslie made me the most incredible corned beef hash for breakfast today. Shelter in place certainly has its advantages. She bought an organic grass fed, hormone, nitrite, nitrate and sodium benzoate free corned beef, hand finished in the purveyor's own proprietary brine.  From a market that shall remain nameless. She grilled organic russets in the corned beef jus and topped it off with horseradish cream. No foul peppers or onions, just the exquisite corned beef in all its earthly glory, just like its maker intended. Superb.

She humbly said that it rivaled the very best we have tasted, from Dad's Diner in Anacortes, where they smoke their own. I say hers is better.

She is going to leave the valley and try to track down another one today. In search of the wild brisket. Not going to tell you where. And find some more of the organic sour cream she favors. She mistakenly let some people know about it and now it often sells out on us. It is clearly every man and woman for themselves. We need to practice omerta, the mafia code of silence, in special times of crisis like these.

I am staying home all day. Why go out?

Natasha says "Hi". She feels famous. Hopefully get off this island, but not really. Peace to all. Hold on tight, this ride is bumpy.


Wearing masks to prevent spreading or getting a virus and providing hand sanitizer spray bottles at public facilities and grocery stores near the
grocery carts have been a common practice in Japan for a couple of decades. Social distancing and respect for people's space is generally practiced in rural areas but there is some cleanliness disconnect in some public areas. There was a short run on sanitizer, masks and toilet paper, but things have returned to normal. Maybe these practices will become a new normal for other countries as well in the future. Please take care of your health and I'm glad you are enjoying an abundant Fallbrook/De luz spring full of wildflowers and wildlife.... and wild brisket!

As my friend Sabino says,”we have to eat 3 times a day. We might as well eat delicious food”. Glad that’s workin’ out for you.

Any other meals are optional. I’m pretty much .4/.8/1.2 if that makes any sense. Thus stable low weight.

Do you have enough ammo?

That is a great question? But if I can not finish the job with two magazines I am probably involved in something out of my pay grade.