The disparate political leanings of the individuals in my photographers group are starting to come to the fore and are causing some minor tremors in the force. We have a text message chain going now and like most things, people get a little nastier online or messaging than they do face to face. We have always been a fairly tolerant group but there must be a bug or microbe in the air that is making things a little testy. Things are dividing.

Individual A said that McConnell and Pelosi were equally contemptible. Now I personally fail to see it. And mentioned that any strong woman seems to be loathsome to your average Republican, it is built into the GOP DNA. The venom that gets directed at a Pelosi, or a Hillary or a Boxer was always, in my mind, way out of line with any real or imagined sin they may have actually committed. And I have always wondered why? Is it because they are women? They denied it and I got hammered. Hey I have a thick skin. I dish it out and I can take it.

Perhaps the attitude starts at the top right now although it has been going on as long as I can remember. Consider the female makeup in the Republican Senate, few and far between. No, I think it goes back to childhood for some people. Problems with mother or seeing women take charge and stepping out front in a man's world. Yearn for a better time when Mrs. Cleaver would stay home all day on the divan clutching her pearls, waiting for Ward and the Beaver to come home.

Look at our President and his history. Going after Michigan Governor Gretchen Whitmer this week, or the nasty bile he directs to female reporters like Yamiche Alcindor, Joy Reid, Cecilia Vega or any number of other women reporters with regularity. If you are a woman, he hits harder than if you are a man and doubly so if you are a woman of color. It is not a mere coincidence, his misogynist rage is palpable.

And I think that I know why this is. Republican men like mousy, compliant, submissive women of the stepford persuasion. They have a tough time with strong ones. This may be vestigial behavior going all the way back to the bible, where women were oft regarded as property and coached to be rather suppressed and subordinate. It is a patriarchal thing. 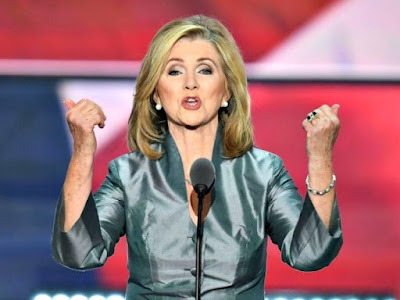 All you have to do is look at Fox News to see what the favored GOP look is. Preferably airhead blondes. Like Senator Marsha Blackburn. Or wackjobs like Michele Bachmann.

I was raised by a strong woman and had strong sisters. I am married to a strong woman. In fact I rather enjoy them. I am not threatened by them, well, except occasionally by my wife.

But some people definitely are. Or think that a woman's job is solely in the kitchen or bedroom. Or are still not down with equal rights or the concept of equal women whatsoever. Certainly not with a woman's right to make her own reproductive choices.

I am not going to belabor this but I am being sincere and honest here. Where does this hostility towards women come from?
Posted by Blue Heron at 7:32 PM

So what you are saying, GOP men fear strong women, and what you believe, Michele Bachman is a wackjob.... seem to be in perfect harmony to you in the pretense of your post. Why is that so?
Is it is only OK to be a strong women, if (and only if) they choose to think the same way as you?
Would Michelle say the same of you because you’re a strong man with a different set of opinions, views, morality and believes... I think not.
She would very much disagree with you, but not because you’re a member of the weaker sex. She might even tell you about her strong, single parent mother, her support of democratic candidates in her younger years, or the reasons she left the Democratic Party, but I doubt she would bring up your lack of, or abundance of masculinity.
So let’s just be a man about this and say what you really believe... either others should think like you, or they will be dismiss... not withstanding gender.
P.S. Most conservatives think Gov Cuomo is as useless as Gov Whitmer; and most Democrats think former Gov Pence was as useless as former Gov Palin. Now try to bait another line.

Here is a snippet from rational wicki about Bachmann:

Bachmann is often known for putting, shall we say, a new spin and a unique perspective on historical events:

Regarding the Founding Fathers and the United States Constitution, "We also know that the very founders that wrote those documents worked tirelessly until slavery was no more in the United States."[43]
When called out on it, rather than admit her mistake, she doubled down by stating that John Q. Adams was a founding father and "fought tirelessly to end slavery" during the Revolutionary War era, despite the fact that he was 9 at the time of America's founding.[44] While John Q. Adams did eventually emerge as a major figure in the abolitionist movement, that did not happen before the 1820s.
Calvin Coolidge got us out of a depression while FDR started the Great Depression by passing the "Hoot-Smalley" tariff.[45]
The American Revolution started in New Hampshire, not Massachusetts.[46] Silly historians.
The Soviet Union still exists.[47]

She is batshit crazy!

People should have made that choice before they went to bed but were too lazy and ignorant to take birth control. The old saying everyone that’s for killing a baby has already been born. I was in same boat as everyone on abortion when one day as a younger person I poached a deer. Upon gutting it I discovered it was a baby deer not a blob Inside A perfectly formed Bambi. Made me Ill and feel stupid for my stand. Not trying to get into the rape thing but Hitler felt jews poles gypsies Christians and many other were not human. Don’t see difference in pro side sorry

Hey poacher. Sign your post or don't comment. If you wish to remain anonymous tell me and I will omit your name. Way to stay on topic. So misogyny is acceptable if it is to protect the unborn.

I love the way you're pulling out all the stops on writing and with your topics, Robert. Call it like you see it.

I agree with your take on hard-core conservatives and women. They are indeed appalled/incensed/outraged about women who challenge them. I grew up in a Baptist church and the role of women was made very clear to me. They were not allowed to speak in church. They were secondary to the male leaders. No nuance there.

Like you I married a strong woman. I have (mostly) recovered from my childhood brain washing. Though I have to say, Trump is a weird one. He exhibits an extreme amount of hate toward women, yet he clearly wasn't brought up as a conservative xtian. So something else is at work with him.

I guess anon believes what the right believes, that the unborn baby life is more important life than the mother's life. Wait until it's born, then kill it is fine.
~ Diane O

except occasionally by my wife.

You deserve more props for this line than you’re getting