I received word this morning that both of my April shows have now also been cancelled, Del Mar and Hillsborough. Going to be hard times for many of us. People are in survival mode right now and I don't blame them. Sort of banal to even mention my personal business when so many thousands of people have been smitten by this deadly pandemic.

But still I am angry. Administrations are supposed to prepare for the worst to happen and then be glad when it doesn't. They need less riverboat gamblers and more Rand Institute types over at Trumpland. Trump getting rid of the Pandemic response unit was criminal in my mind. Wonder if we will ever find out who had the final word on this one. The real story.

Bolton says nothing to see here, a mere case of streamlining but the people that were on deck at the time see things differently. Clearly, somebody dropped the fucking ball here. Read Jeremy Konyndyk's Lessons Ignored; John Bolton’s Bogus Defense of “Streamlining” Away Our Bio-Readiness.  Or Beth Cameron's I ran the White House pandemic office. Trump closed it. 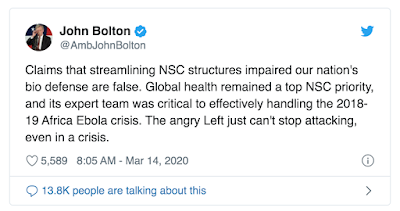 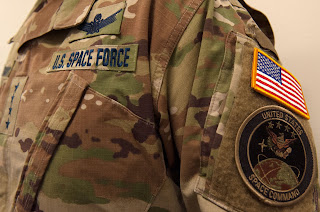 A plain case of criminal hubris. Speaking as an angry leftist of course. Trump said, “This is something that you can never really think is going to happen.” But isn't that what wise leaders are supposed to be doing, imagining potential worst case scenarios and the unthinkable? Keeping the citizenry safe? Surely not outfitting a military space corps up in fancy uniforms.

He is clearly not wise, he has been in way over his head from day one but a whole cadre of sycophants thought that they could pretend that the emperor was actually wearing something and cash in and get their social agenda enacted. Wow, was it worth it? I personally think he is an incompetent bumbler but it's both too late and clearly unnecessary to press my case at this point. A.M.F.
Posted by Blue Heron at 2:09 PM

What's your point, Ed? They don't need sociopathic, narcissistic tyrants particularly either. Is it every man for himself now?