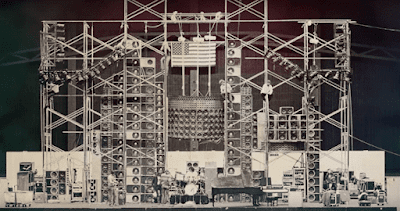 46 years ago yesterday, 3/23/74, the Grateful Dead's Wall of Sound speaker system debuted at the Cow Palace in San Francisco.

The monstrous array was the finest sounding audio system ever assembled but its sheer size and complexity proved unworkable for the band and it was abandoned after only a few years. It took several days to assemble and they had to acquire two identical systems to get a jump on the successive shows in different towns. This required a lot of extra trucks, money and labor.

The brainchild of sound engineers Owsley and Dan Healy, based on the work of a deceased audio engineer named Harry Olson, it created a sonic landscape never again matched for accuracy in concert history. Very innovative, the p.a. being placed behind the band for the first time. Extremely straight signal path. The band had tried to use the same system at a show in Stanford two months earlier but they unfortunately blew up the tweeters.

This was my first show in California. And it was an eye opener. Having been a crazed young New York deadhead prior, I had never seen farmer or left coast deadheads before and the plumage on the local hippies, was just, well, different. Overalls and more tie dye. Definitely more laid back, people wired differently.

My late mother actually drove us to the show and attended it with us. Thanks mom! We drove up from the south in a big old Lincoln Continental convertible. At least two of my then deadhead friends from New York flew in and traveled with us, Gabe Miller, who became the long time copy editor at Sport Illustrated and Henry Meer, who eventually became a well known chef in New York. It just so happens I no longer have relationships with either of them, haven't in decades. 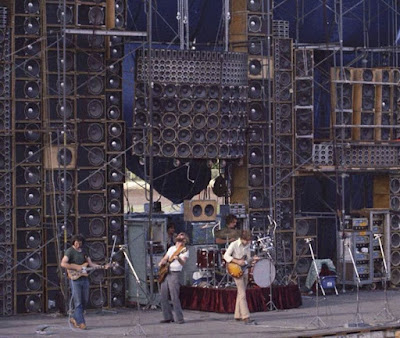 Abby Marshall and Debbie Sperling, my girlfriend and another good friend, may have been with us as well, I don't really remember exactly. They may have flown in later.

My little brother John and my mom's then boyfriend Ed Harris completed our little troupe.

The Cow Palace was a huge old barn, had been used for rodeos I think. The cow in the name was no lie. Not the most grand of halls.

The show was pretty killer, first set closer China Cat > Rider - Weather Report Suite. Second set Playing in the band > Uncle Johns Band > Morning Dew > Uncle Johns Band > Playing in the band > Ship of fools was the jam. Might have had a false start or a third go into Playing, will have to listen to it again. Been a while. First time Cassidy was ever played, I did not know that, just checked. And Scarlet Begonias too. Forgot there was a second set Me and My Uncle too, always a nice change of pace.

The sound system was made up of 586 JBL speakers and 54 Electrovoice tweeters powered by 48 McIntosh MC-2300 Amps (48 × 600 = 28,800 watts of continuous (RMS) power). It was the first line array system in modern performance history. Its cost and size eventually made the system unworkable. 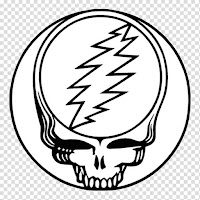 But boy did it sound great here. Crystal clear. Pin drop. You can hear an audio recording of the show here. Would like to say that I remember it like it was yesterday but forty six years was a long time ago and there has been a lot of water under that bridge.

It was my first time in San Francisco and I do remember the fun we had tripping down Lombard and walking the steep streets of the city at night. The Grateful Dead provided an incredibly rich soundtrack for much of my life. This was a show I will never forget.
Posted by Blue Heron at 4:32 AM

I was there at the Cow Palace too. It's the only Dead show I ever saw. Drove up from Oceanside with my friend from high school Steve 'Burnout' Anderson. Great sound.

I never knew that. Cool.

I got this note from my friend Howard, long time dead soundman and wonderful human being,,

"never again matched for accuracy in concert history" I wish to add we are more accurate now than then but it did sound great if I was in the first half of Winterland."
Keep em coming. Howard

I saw the Wall of Sound again two months later, outside at Santa Barbara. it was a very hot day and didn't sound nearly as good outside.

I remember the family looking for you one time and finally making a connection outside the Fillmore East. You were at a Jefferson Airplane concert. Had to be 69 or 70 I think. And you took me to my first rock and roll show, Canned Heat at Stonybrook, in fact it was there that you introduced me to black primo hash.

Back to the show, I will say that there did not seem to be near the cameraderie in the crowd that there was two and three years later, the "scene" was still coalescing. People were sort of on their own, nothing like the later vibe at Winterland. The second generation seventies deadheads became a serious force but it took a while to click.