Living in the ap of uxury

Morty threw a new word at me this afternoon, uxorious. Had I ever heard of the word? I could not lie, well I could not lie in case he had made the freaking word up on the spot anyway, I confessed that I had never heard of it. He assured me that it was in fact a bonafide word.

Apparently it was used in this article from the Washington Post written about his lifelong and not quite stable pal Richard Lewis. An article that I am not permitted to see, not being a subscriber.

Now it certainly sounded like a very expensive word, too rich for a poor guy from the other side of the tracks like me, but I will bite, what the hell does it mean? I looked it up.

doting upon, foolishly fond of, or affectionately submissive toward one's wife. 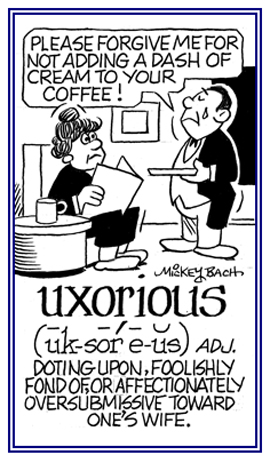 Now I am pretty fond of my wife and even dote occasionally but I don't think I have ever taken it to the level of uxory. Excessively submissive, oh ya, but that is mostly for self preservation purposes and I don't think you can deduct points for that.

The word hails from around 1590, from the latin root ūxor, wife. Interestingly, there is no analogous word for a wife similarly controlled by her husband. And by the way, uxoricide is the killing of one's wife, which we at the blast frown upon in the most vigorous way.

Tough to use a word like this with a straight face, a word that 99% of the population is/are clueless about. People that use words like this are so prolix, don't you agree?

I think it is time for a limerick, if I can deliver one in an impromptu fashion anyway.

There once was a man from near Luxor
with a terminal case of bad uxor
he sealed up her tomb
like an egyptian womb
for this Nefertiti had made his whole life sore.

not bad, not good, no, it's terrible, you come up with something...

The updated version is "happy wife, happy life". i try to live by that.