Set up on Easy Street 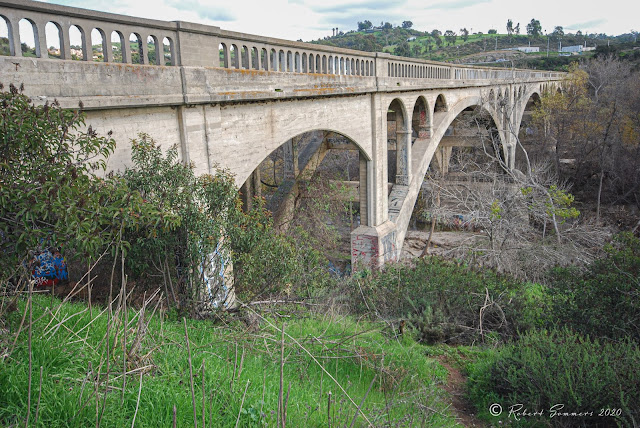 We had a little kerfuffle nearby on Saturday. Or maybe it was Friday? Yeah, Friday. Homeless people have taken up sleeping behind the shop again, on my property. The neighboring property owner tossed a bedroll that the homeless guys were furtively storing in our back cabinet (without our permission) over the block wall in back. It is both a safety and liability issue for us to let them take up residence on my back porch and frankly, I don't want it to continue.

Anyway, I was gone but I guess the homeless guy, who is a rather large man, went into two of the neighboring shops with a sleeping bag over his head and threatened them physically after discovering that his stuff had been turned out. Lynn locked herself in the store, Ron had words with the guy, who said he was going to go get a friend to help beat him up. Sheriff was called but as is typical around here, never showed up. Guy never came back but I saw him ranting on the streets this morning, seems pretty psychotic.

Two years ago homeless people were sleeping in a cubby hole on the corner of the property, cops also seem to want to let them have free reign at night, wouldn't do anything when we called, even though the station is a block or two away. Too busy, I guess. Ron finally filled the area in with cement to dissuade the nocturnal practice. Honestly it is getting kind of scary locking up the shop in the evening, you really have to look around in the alley to see who might be where?

Homeless people around here are breaking into buildings, sleeping on roofs, it is getting pretty bad. And it never used to be like this. I have been in town for forty years, we always pretty much knew who was homeless and there were rarely over three or four of them at a time. Caesar, the mute guy with the long coat, you had the bearded walker from Bonsall and maybe one other guy who took up shop in front of the medical building. That was it. Not sure what changed?

A person told me that indigents are actually being shipped up here, from other municipalities, and that word is out that Fallbrook is easy street. Not sure if it is true or not. But I keep an eye on this population and can tell you that they are overwhelmingly white, male and certainly look physically capable of working if they have the inclination. Many of them do appear to be addicts, meth, opiates and alcohol seeming to be the favored substance du jour.

I am a liberal and compassionate human being, I feel for anyone that is down and out but I certainly have my prejudices and feel much more inclined to help a mother with a baby who has lost her job and has no place to go than a person that puts their own head willingly in the noose, especially when many nearby jobs go unfilled. I am for helping people that are hurting through no fault of their own, less so when the problem is entirely self induced and capable of being corrected. Help people that help themselves.

Try to walk the Pico Promenade any day of the week and see what you find. People start getting tanked pretty early in the day down there. Fallbrook must be heaven, fruit falling off the trees, a Food Pantry that serves all comers, cops that look the other way, dogooders in Bentleys with the ear of the County Supervisor, this place is obviously easy pickings.

Of course the homeless explosion isn't helping downtown business people struggling to make a living, but who the hell cares about them?

I heard the other day that there was some information on the Friends of Fallbrook facebook website that may or may not be accurate. Something about half of the proposed County homeless shelter sites being in Fallbrook. Couldn't be true, could it? I decided to look into it. Not quite true but close.


County staff found 15 locations that could be developed. Six are in Spring Valley, two are in Lakeside and seven are in Fallbrook.
"I was a little bit frustrated that we had only had seven sites identified in Fallbrook — I asked for the entire District 5 to be looked at," said Supervisor Jim Desmond.

So it's 46.66 percent. Not 50. We get every potential site in Supervisor Jim Desmond's district? Beautiful. We get to be ground zero for the entire North County homeless population? Lucky us.

Ever notice that the unincorporated area of Rancho Santa Fe never gets crapped on like we in the hinterlands do? Of course they don't. Money and politics baby. Ship them up to Fallbrook, no one will say a peep. Stick them in hotels, on the taxpayer nickel. Reward all sorts of crappy behavior.

Desmond says that helping the homeless shows compassion and strength. Fine. How about throwing a little compassion our way too, Jim, to the working folks and property owners who are trying to maintain a tolerable Main Street and support their families while you engage in your ultra enabling social experiment? Shops are shuttering left and right and I guarantee, you are not helping. My wife and I are trying to run separate businesses and pay the mortgage on our commercial building and it is getting harder and harder, especially with people in the street that seem better suited for a mental ward.

But it is easy to know what is going to happen. I have seen it in Santa Barbara, Santa Monica, Portland and Seattle. Make it real easy and comfortable for these people to hang out here and live on the cheap and many more will come.  Like swallows to Capistrano.  Build it and they will come. You can bet on it.
Posted by Blue Heron at 4:13 PM

Whatever the underlying causes might be I suspect that the homeless increase in Fallbrook is probably proportionate to the overall homelessness growth in CA lately. There seem to be legions of homeless in the CA cities. As far as shelter beds go. I don't know if seven spots is proportionate or not. Things like where to put a homeless shelter become massive, radioactive, red hot, smelly political footballs instantly.

I suggest that you share your concerns with Desmond. You, as local,business owners, should be listened to! You can express your self very eloquently and will, hopefully, gain his attention.

Thank you for your email. Recently, the Board of Supervisors put forth a very aggressive Homeless Strategy for the unincorporated areas of San Diego County. The immediate concerns address the areas in East County such as Spring Valley and Lakeside where the population of homeless camping exceeds several hundred. The East County will be treated much differently than the North County.

The North County areas will have increased Sheriff’s Homeless Outreach visits with contracted providers to assist in triaging those in need into appropriate services. Additionally, I have requested a list of available properties in the unincorporated areas of North County and available County properties in North County cities that could be used for permanent housing. Once this list has been vetted by our Housing and Community Development team, I will provide the available locations to municipalities and community planning groups to review for input.

I feel very strongly we have an opportunity to create housing for those that are seeking assistance and do this in a way that will enhance communities.

I am not sure that I follow your reasoning. Rather than being an enhancement in any way, my fear and prediction is that the selection of Fallbrook as a site for a homeless shelter will instead be a magnet for more homeless people from North County (and Temecula) to come to our community to live. You are throwing out the welcome mat. As the sole location north of Escondido, Fallbrook will be a dumping ground. As a business and commercial property owner in Fallbrook I note that you do not address in any way the harassment and vandalism that we business owners and residents face and that I discuss in my letter.

I think that you are going to make it worse.

Thank you for your quick response in any case,

"What we have found in this country, and maybe we're more aware of it now, is one problem that we've had, even in the best of times, and that is the people who are sleeping on the grates, the homeless, you might say, by choice." Ronald Reagan

Robert,
Read your article.
I think your frustrations are shared.

Many of us have put a lot of time into improving thai community only to see be set back by the homeless.
Heyneman Park had to spend close to $40,000 for fencing so that it could control the homeless population.
The Pico Promenade is one of the prettiest walkways in North County but has been taken over. We are trying to take it back through private property rights angles but that going is slow and the county has been hesitant to commit on giving us clarifications.
Many business owners have had to install additional lighting, fencing and remove out door outlets, all expenses that no one really needs.
And yet, people who seemingly don't have jobs yet are able to own cell phones, purchase liquor at expensive liquor stores, and buy fast food.
The source of these funds are the real problem. It takes away any incentive to work or be productive.

The end result is that no one should receive money without earning it. If they can't find a job, then they should be given the option of a state run work camp where they receive three meals and a bed in exchange for labor. If they refuse that, then vagrancy laws should be enacted and they should be dealt with via legal means.

So, all in all, I think your sentiments were not harsh, they were accurate.

wow Robert I agree about the homeless situation. They need to bus them back to the cities where there are far more people who can help these folks. Fallbrook having a small downtown area is the wrong place for homelessness. Did they make the old hospital a mental health facility do you know? I am bummed about it too. Our once beautiful little town has become skid row/mexico...

Excellent diatribe on what most if not all of us are feeling about the homelessness situation here in Fallbrook. We may need a reincarnation of Rusty Fossatti.