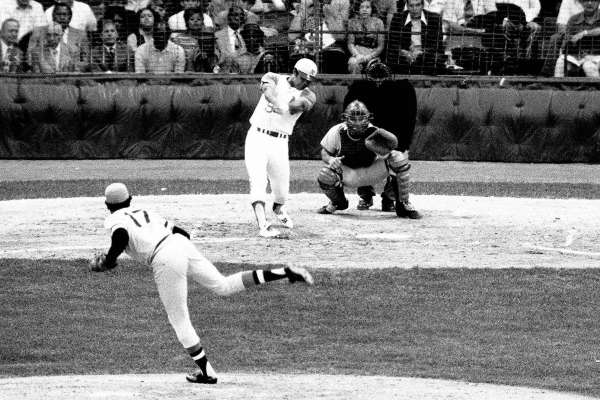 People talk about Mantle's shot, the long distance stick work of Frank Howard, Killebrew, Kingman and McGuire. all legitimately strong men, only one I know of on the juice. The most prodigious home run I ever remember was in the 1971 All Star game. Tiger Stadium. Reggie Jackson wasn't even supposed to play but Tony Oliva was a late scratch. Teammate Sal Bando just said, "Whatever you do, don't strike out and embarrass us."

Reggie was hurting with a strained hammie. American League is down three to nothing. Fourth inning. Aparicio on first. No outs. Reggie comes in to pinch hit for Vida Blue. The acid cat is pitching, Dock Ellis. Count is one and one. Jackson swings on a fastball from Dock.

Smack! It takes off into orbit, would probably have hit the space station if it had been in the air, the only thing that stopped it was the right field tower. Just started going up and never stopped. Mantle once hit one over 632' at Tiger Stadium but I can't even imagine it was any better than Jackson's. Happy earth day, this one was leaving the planet. I will never forget following the trajectory on my television, jaw dropped. It wasn't the distance, it was the steep angle, kept going up and up.

The most amazing shot I ever saw in my life. Reggie never hit another one for even near that distance. He didn't have to. He said he couldn't have repeated it with a fungo bat from second base. His shot will live in the annals of baseball forever. I have always loved Reggie. I once saw him hit a monster shot in Oakland that also hit the sign. Extremely intelligent. Mr. Clutch. Son of a bootlegger. He was brash but he could back it up. Underrated. Would take him over a Barry Bonds any day of the week.

Mantle's record shot was at the old Griffith Field in Washington D.C.
I was at Yankee Stadium where he hit a ball that almost the cleared the Stadium roof in right field would say at least 150 feet high. Amazing he hit that "left handed" ball at Griffith was right handed!!

Mantle's Tiger stadium shot hit the Brooks lumberyard across Trumbull Ave. But he hit one at Briggs Field in Detroit that might have traveled even farther.

I hate Reggie Jackson. My beloved Dodgers were in the 1977 World Series and that sob hit three home runs in one game to win the series.