The current inhabitant of the Oval office lies so much that it is almost comical at times, I don't know how anyone can take anything out of his mouth seriously. He had two whoppers this week that I would like to share with you. The first one is a classic:

Invoking his best George Washington impression but with a nose growing more like Pinnochio, he uttered that one at a news conference the other day, speaking to a reporter.  Sort of like A.J. Foyt saying, I can not drive a car. The champion liar of all time saying that he is incapable of uttering one. Beautiful. Epimenides himself would blush. 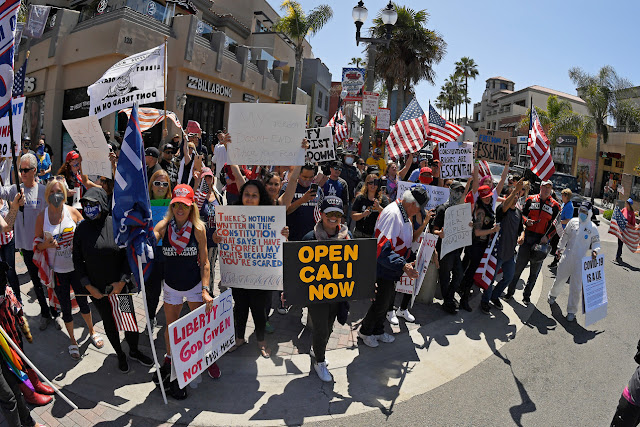 On a serious note, there was an even better lie yesterday. Trump says that shelter in place protesters were keeping safe social distance and observing proper precautions.

Note the one guy in a nearly full protective suit on the right carrying a sign that says Covid is a lie. More cognitive dissonance. If it's a lie, why all the gear?

Now I have seen literally dozens of current protest pictures and you have too and few people are wearing masks and practically nobody is keeping a safe (six foot) social distance in any of them. 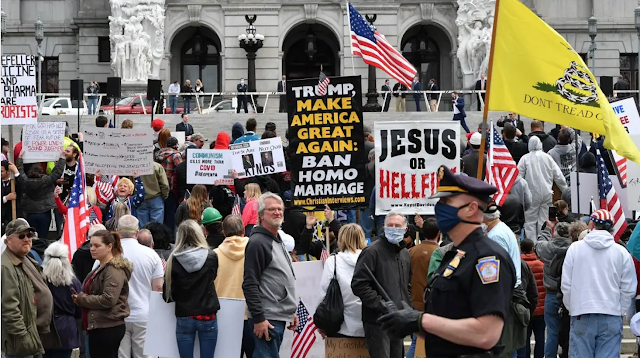 Now President Trump knows this too, of course, he is an avid media watcher and is seeing the same photographs that we do.

But a prevarication fits his political needs here better than admitting the truth. And his base doesn't care and he knows this too. So he lies. Because lying comes so easy for him. Like his saying that governors have adequate testing supplies. Even the Republican govs are calling him on this one.

He's a liar. It is as easy to see as the nose on his face. 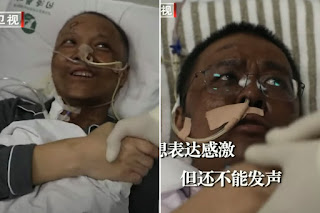 There was an interesting story in the sorry rag that is the New York Post this morning. Two Chinese doctors infected with Covid -19 came out of treatment with dark skin.

I sent the link out to a few friends for comment and got this response from one who has asked for anonymity: It should spread to all the Confederate flag waving, gun toting lunatics.

Now that is funny!

And also from the post; Another one bites the dust. John had said the whole hubbub was a political ploy. He wasn't afraid of no stinking virus. Whoops.
Posted by Blue Heron at 8:20 AM

Lying comes so easy for the Guy, I don’t think he knows what he says is true or a lie. Nor does he care!


You're being so disrespectful and cruel to part-time White House resident trump!

Seems like a good time for his anonymous supporters to chime in and defend their Dear Leader.

Any MAGA guys out there sufficiently deluded to deny that Trump is a world-class liar?

Your fearless leaders have six weeks to get their collective acts together or
it's Gotterdammerung writ yuge. Some are giving it two weeks.

We are besot with bureaucrats who haven't an inkling what they hath wrought. You think the Whiskey Rebellion and Haymarket were close shaves? Just wait. You think saving .01% of the population at the expense of destroyed lives for at least 25%, think again.

The protesters of today, in 6 weeks, are going to be rioters.

There is going to be an uprising and it's going to be deadly. Half the country was
living paycheck to paycheck...and that's gone! The targets are going to be anybody in charge. Call in the National Guard when they're broke too?

You got your social distancing and masquerade ball going, Proctor and Gamble and Netflix are rolling in dough. You'd better call off the scam or shadow governments are
going to be the order of the day, and they won't take prisoners. Who cares about social amenities when you got 3 kids and a wife that are starving.

You have three kids and a wife? I never knew that... Seem more like the three wives and a kid type.

Trump told the governor of Georgia... Kemp not to open this Friday. What fucking idiots the press are as what they don't know is that Hydroxie Trump told Kemp to say he was opening so he could tell him not to.... and try to look like he gives a shit, it is so fucking obvious as Kemp is the same tool dufus as the governor of Florida Desantis. Both of them are on the phone daily doing his bidding.